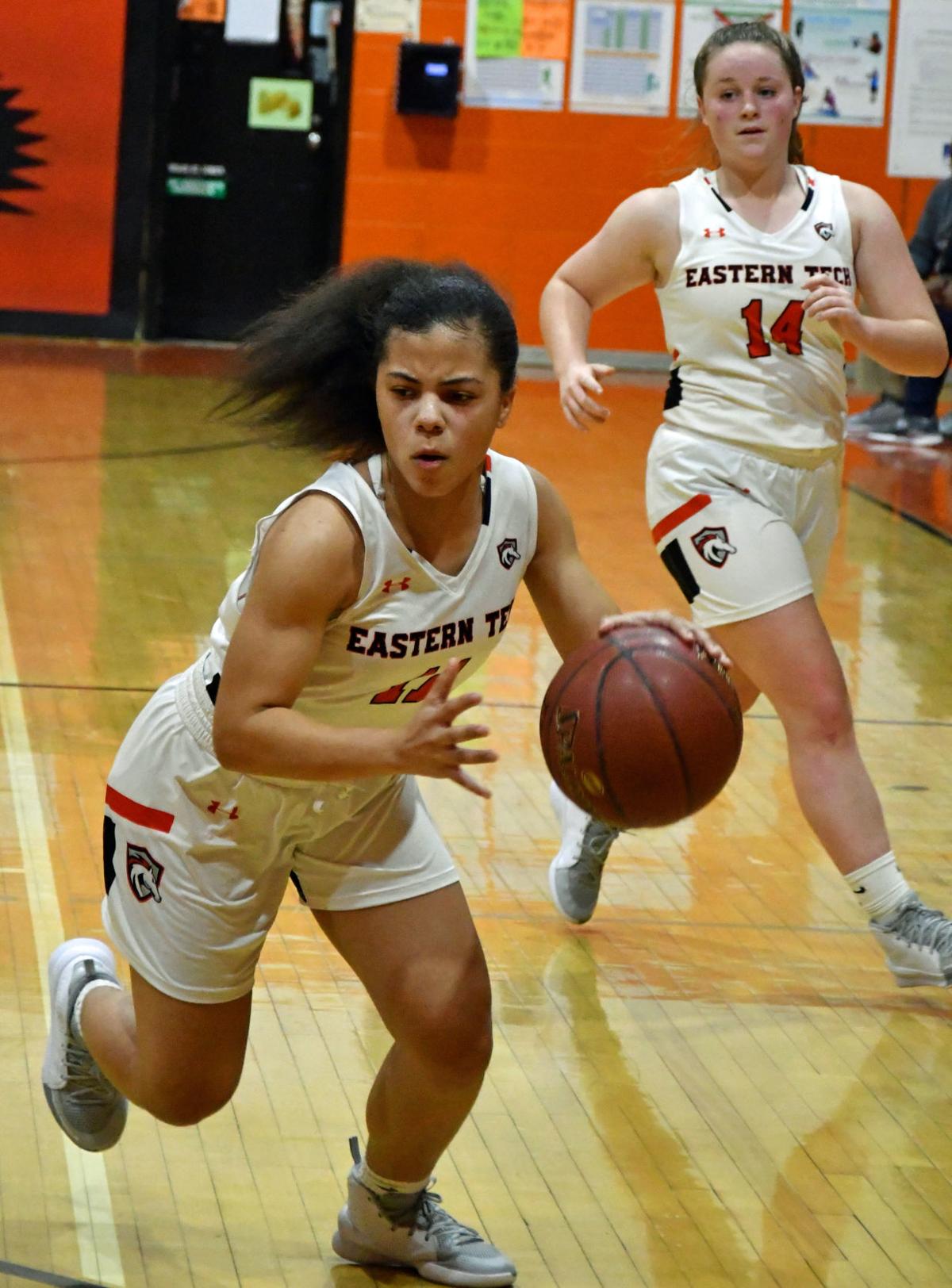 Danalia Irizarry looks for an opening in the Woodlawn defense. 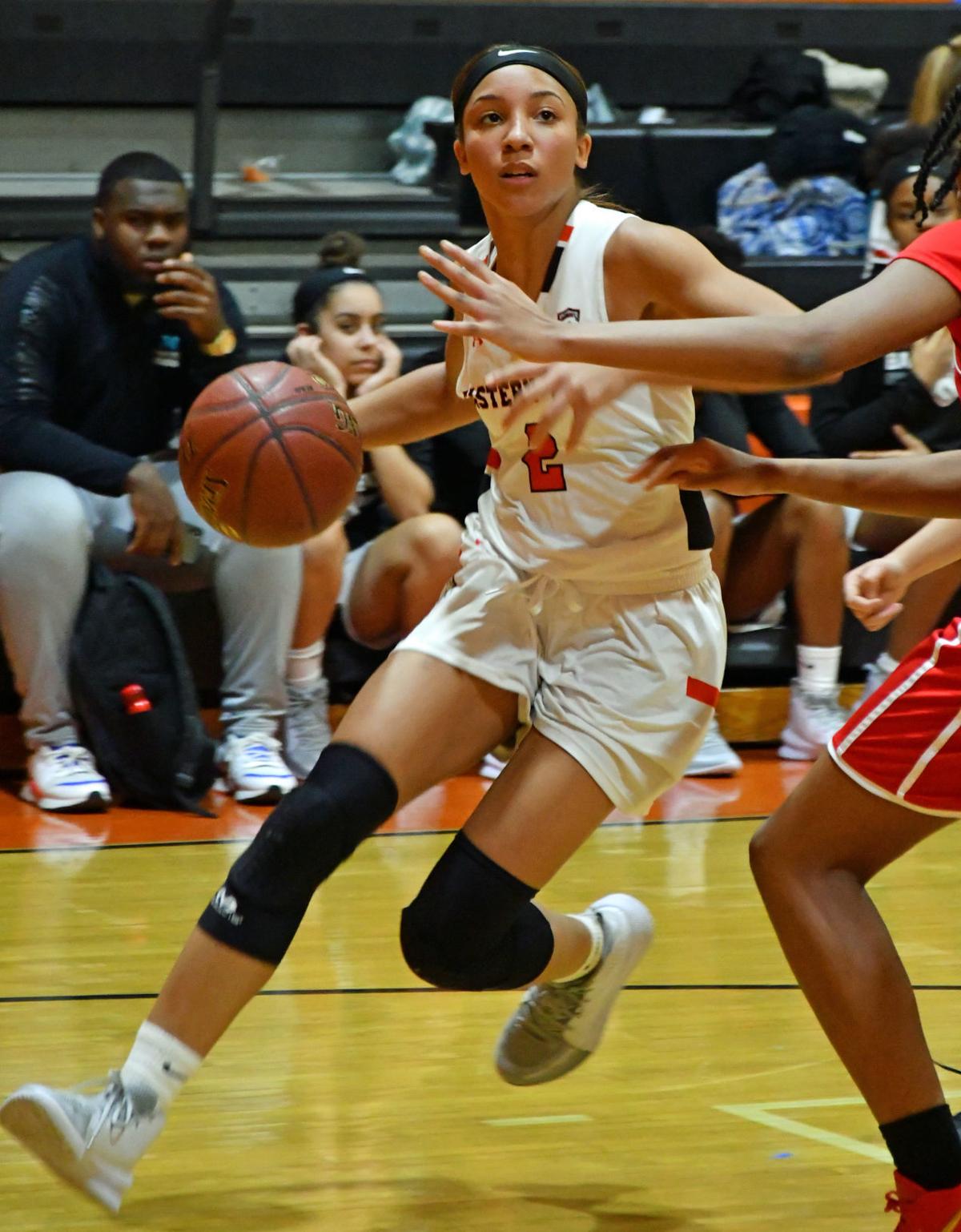 Sydney Edmund led Eastern Tech with 14 points during the loss to Woodlawn on Monday.

Moniya Simon powers to the basket during Monday’s game against Woodlawn.

Danalia Irizarry looks for an opening in the Woodlawn defense.

Sydney Edmund led Eastern Tech with 14 points during the loss to Woodlawn on Monday.

Moniya Simon powers to the basket during Monday’s game against Woodlawn.

After the Eastern Tech girls basketball team defeated Patapsco in the first game of the season, Maverick coach Alexis Washington said the goal was to double the number of victories from last season.

Eastern Tech won four games last season. The Mavericks attained their goal with nearly half the season remaining to be played.

A 44-38 win at Franklin on Jan. 22 put Eastern Tech at 8-3 with nine games and the postseason remaining.

The Mavericks momentum was dented a bit by a 44-37 loss to visiting Woodlawn on Monday, but it still demonstrated the shift in Eastern Tech’s mind-set: the goal has been achieved; now it’s time for another goal.

“As we hit the second half of the season, we want to continue to improve and get better at our style of play and prepare for the playoffs,” Washington said. “This [Woodlawn] was definitely a game we let slip away. We didn’t do enough on the boards and let too much get away from us.”

The defensive rebounding particularly hurt Eastern Tech. Woodlawn’s strategy on offense was to heave up three-point attempts as soon as they got close to the line.

Some attempts were bound to find the basket. Usually, the Warriors ended up chasing the offensive rebound — and getting it.

Woodlawn earned many second-chance shots, as well as several third-chances and one possession where the Warriors scored on their fourth shot.

“We definitely got beaten on the backboards,” Washington said. “Those second-chance opportunities really killed us.”

Eastern Tech led 19-13 mid-way through the second quarter after a follow-up by Autumn Burgess. But the Mavericks went scoreless for the next 3:30, finally getting another basket by Burgess just before halftime to send the Mavericks into the break leading 21-19.

A back-and-forth third quarter during which a couple of Woodlawn’s three-point prayers were answered ended with Eastern Tech leading 32-31.

A jumper from just inside the three-point line by Moniya Simon just seconds into the quarter extended Eastern Tech’s lead to 34-31.

A nearly four-minute scoring slump, during which the Mavericks went through six scoreless possessions, ensured it would be Eastern Tech’s last lead.

The Mavericks did not have a field goal for the rest of the game after Simon’s basket, adding only three free throws whole missing their last 14 shots and two free throws.

The Mavericks were hindered by an injury to Simon which hurt their defense and left all the pressure on Sydney Edmund to bring the ball upcourt.

“Simon’s injury hurt us on defense and hindered what we like to do,” Washington said. “But, no excuse; with the players we have, we need to finish strong.”

The Mavericks were to play at Chesapeake on Wednesday. The Bayhawks (5-3) beat visiting Overlea 51-45 on Jan. 22.

Kayla Cabbagestalk had 21 points and 16 rebounds for Chesapeake.