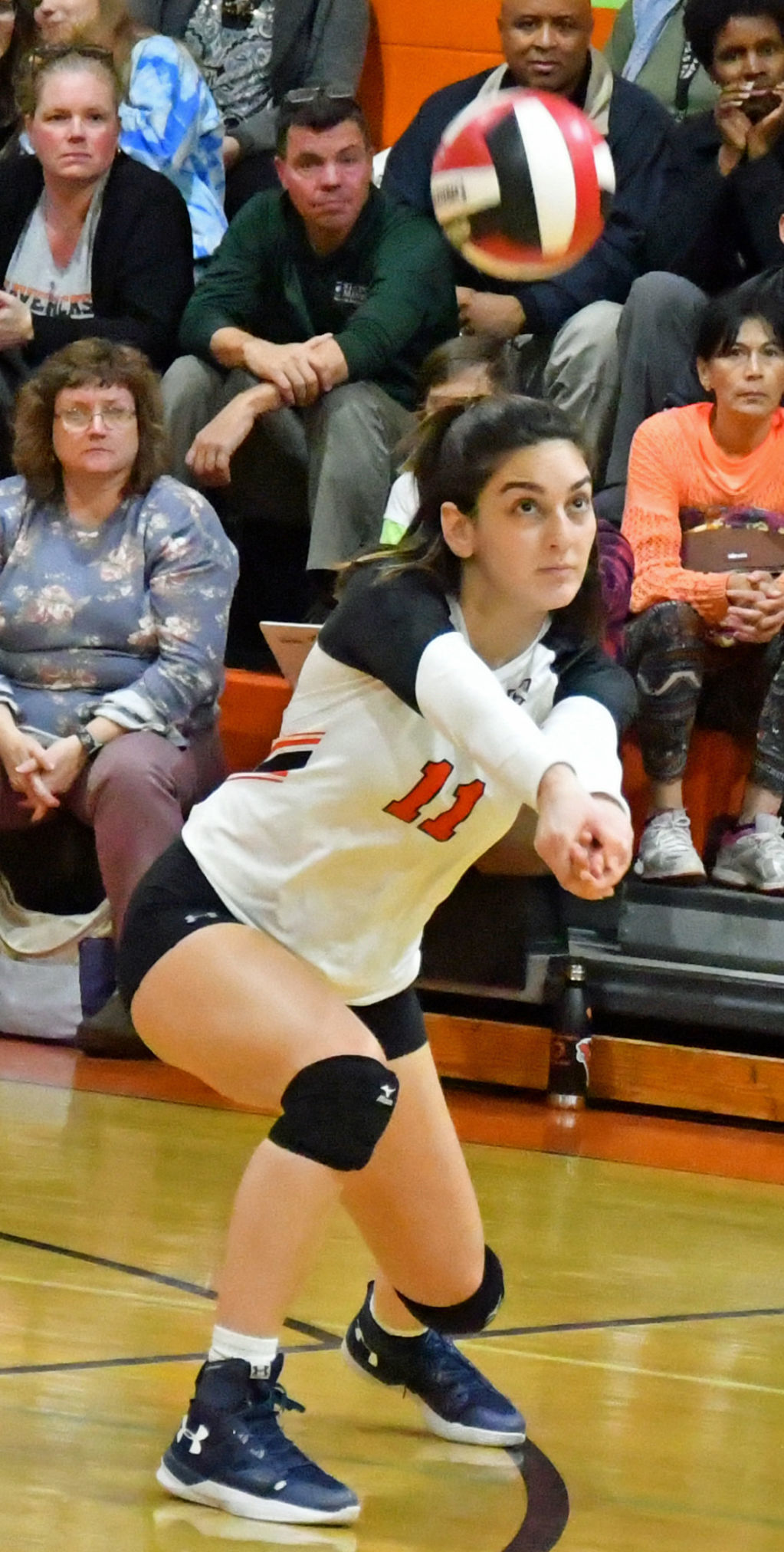 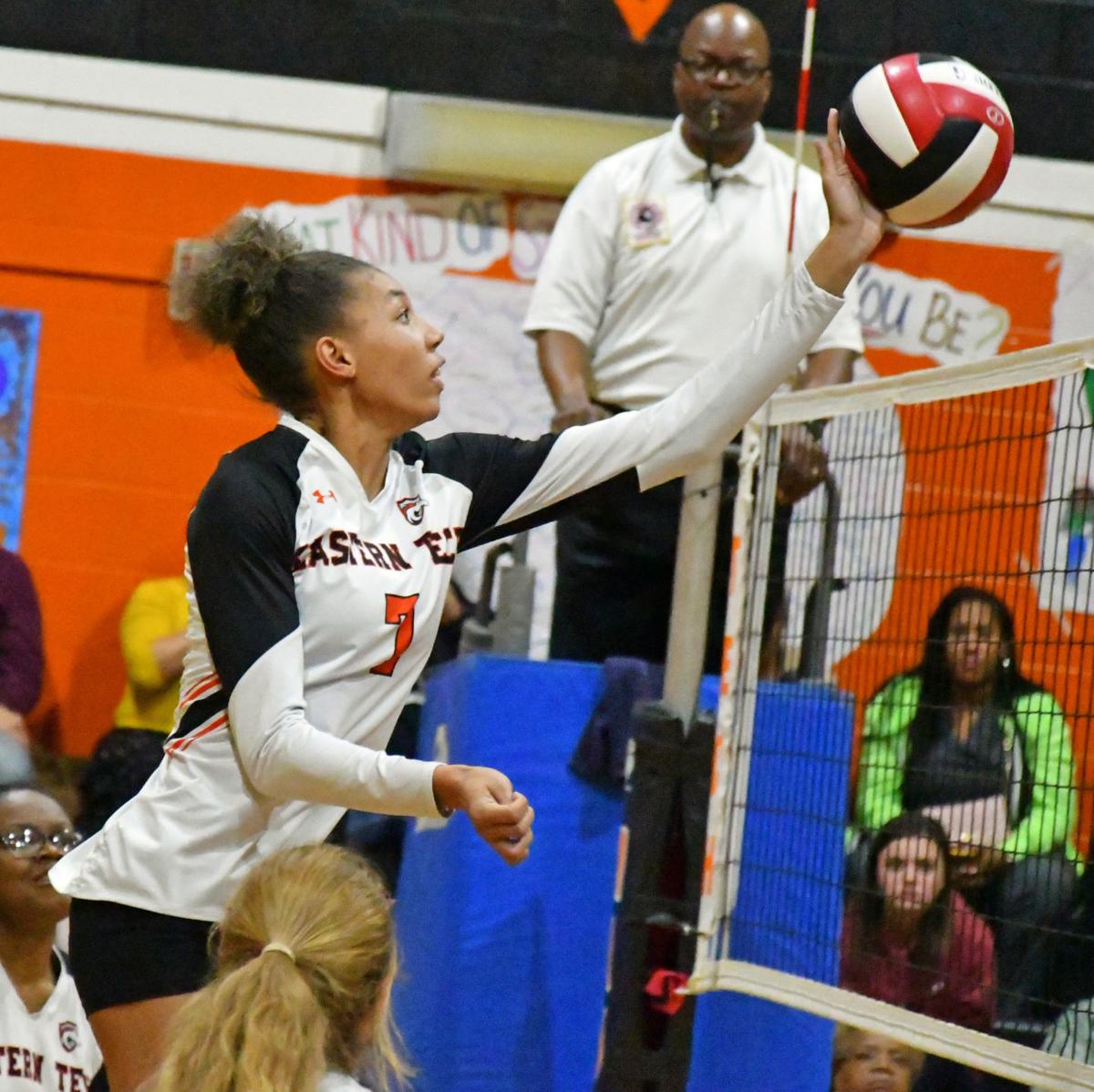 Autumn Burgess dinks the ball over a Carver A&T blocker. 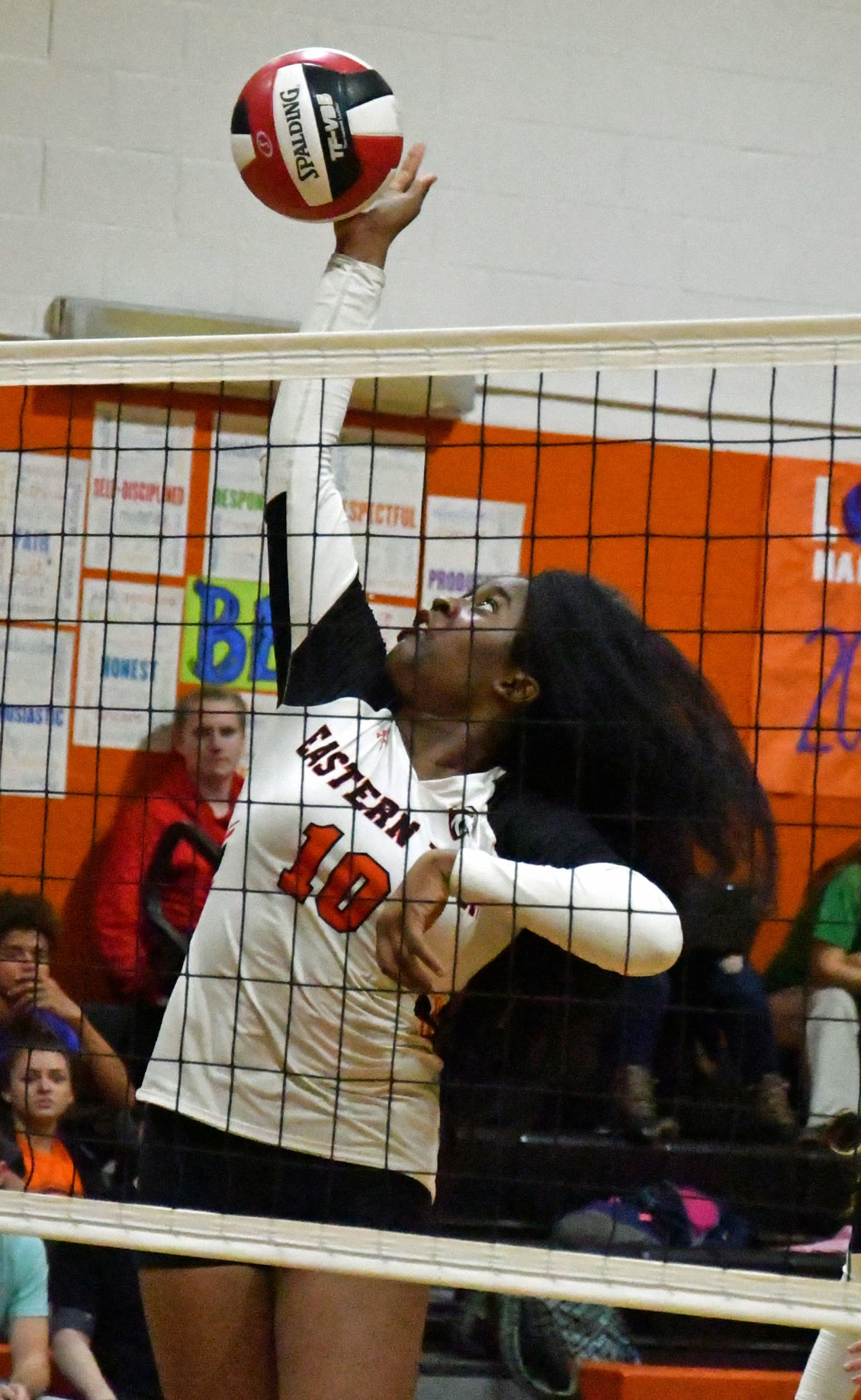 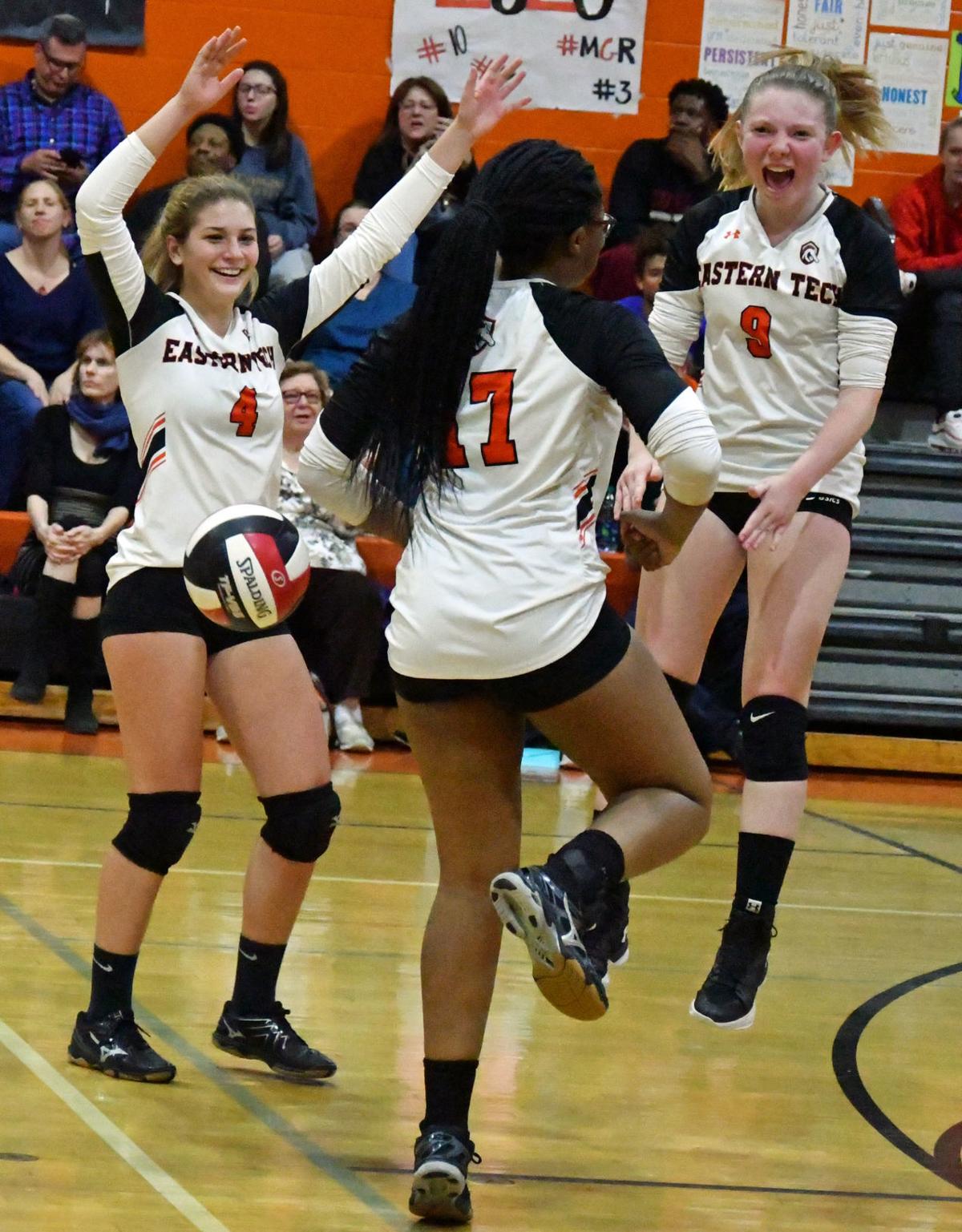 Eastern Tech players (from left) Shawna Budny, Victoria Chinaka and Mackenzie Reich celebrate after winning a point during the match against carver A&T. 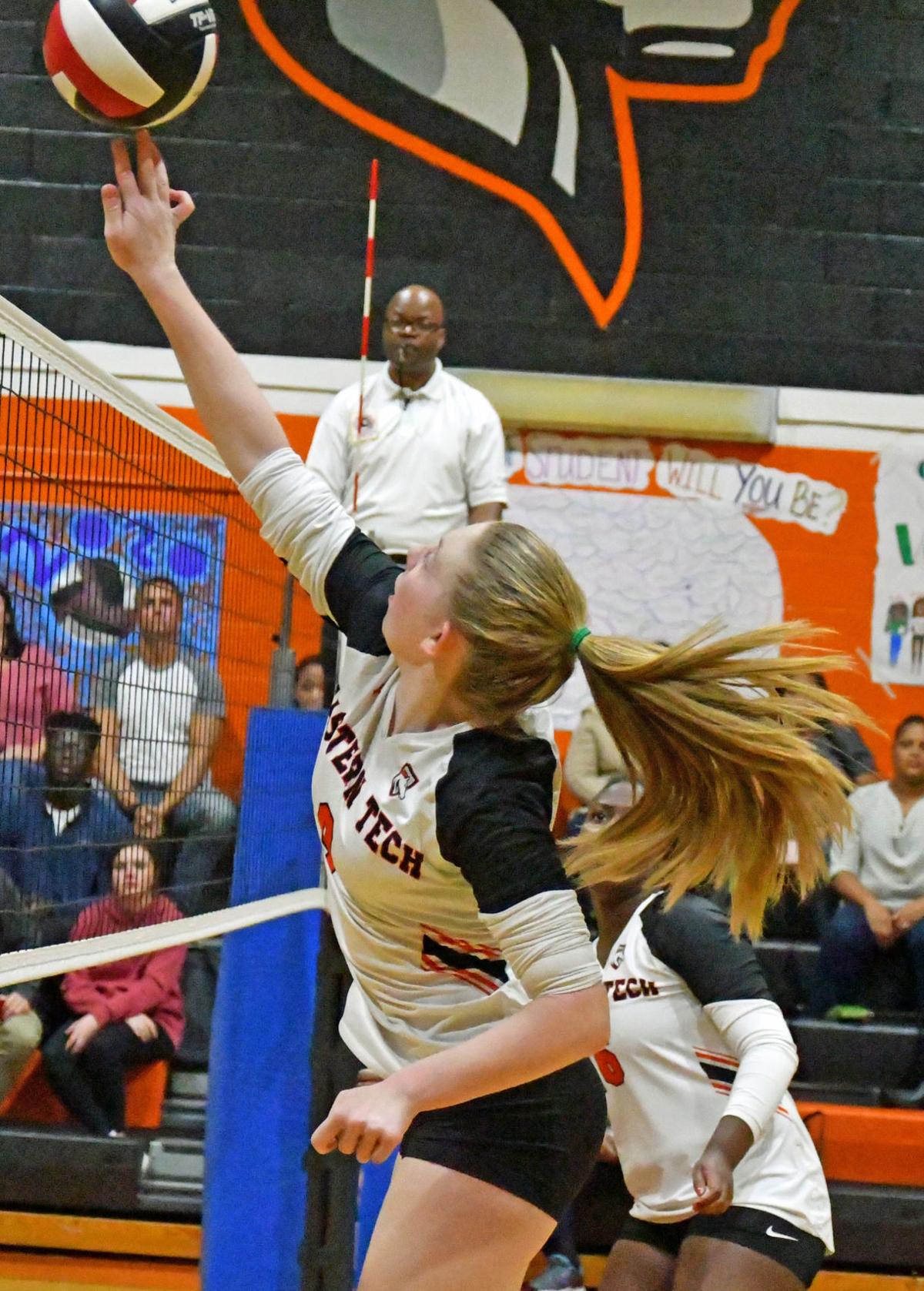 Mackenzie Reich taps the ball over the net.

Autumn Burgess dinks the ball over a Carver A&T blocker.

Eastern Tech players (from left) Shawna Budny, Victoria Chinaka and Mackenzie Reich celebrate after winning a point during the match against carver A&T.

Mackenzie Reich taps the ball over the net.

A volleyball match is won by the first team to win three sets; the order in which this happens really doesn’t matter.

But it can be dramatic.

Eastern Tech (9-9) went on to be swept by second-seeded Century (15-2) in the Class 2A state semifinals, but it was the first regional title for the Mavericks since 2010 and the fifth overall.

“Once we won the third and fourth sets, the momentum was there,” Eastern Tech coach Julie Odar said. “For us, it’s all about energy. Once we saw the energy was back, got some positive results, we knew we had what it takes.

“Commitment and trusting each other. That’s what you saw in the last three sets.”

For a bit, it didn’t look like there was even going to be a fourth set as Carver A&T grabbed an 8-1 lead in the third set and appeared on the verge of a sweep.

A block by Oziama Erandu, a dink by Mackenzie Reich and a Victoria Chinaka service ace slowed the Wildcats’ momentum and cut the visitor’s lead to 8-5.

Trailing 10-6, the Mavericks surged into a 10-10 tie on three spikes by Reich and a Penelope Tapouzaglau service ace.

With the score tied at 16, Eastern Tech took the lead on a carver A&T service error and extended it to 20-16 as Erandu served three points.

The Wildcats led 13-10 in the fourth set. Shawna Budny served four points, getting a block from Erandu and a “shoot” from Chinaka to give the Mavericks a 17-14 lead.

The score was tied at 17 when a Chinaka dink and a spike and block by Erandu helped lift Eastern Tech to a 21-17 lead.

Eastern Tech grabbed a quick 5-1 lead in the fifth set. Carver A&T pulled to within 6-5, but the Mavericks gradually pulled away as the Wildcats failed to score on their final three services.

The final three points came on a shoot by Erandu, a Chinaka dink and a Budny serve the Wildcats were unable to return.

“It’s been a little bit of a tough season for us,” Odar said of the Mavericks’ 6-8 regular-season mark. “We know what we needed to do, and practiced so much on coverage and blocking.”

After losing the first two sets, “we weren’t going to give up at all,” Odar said. “It was going to come down to which team wanted it more, so we got to work.”

It was a dismal day for area football teams in the regional playoffs.