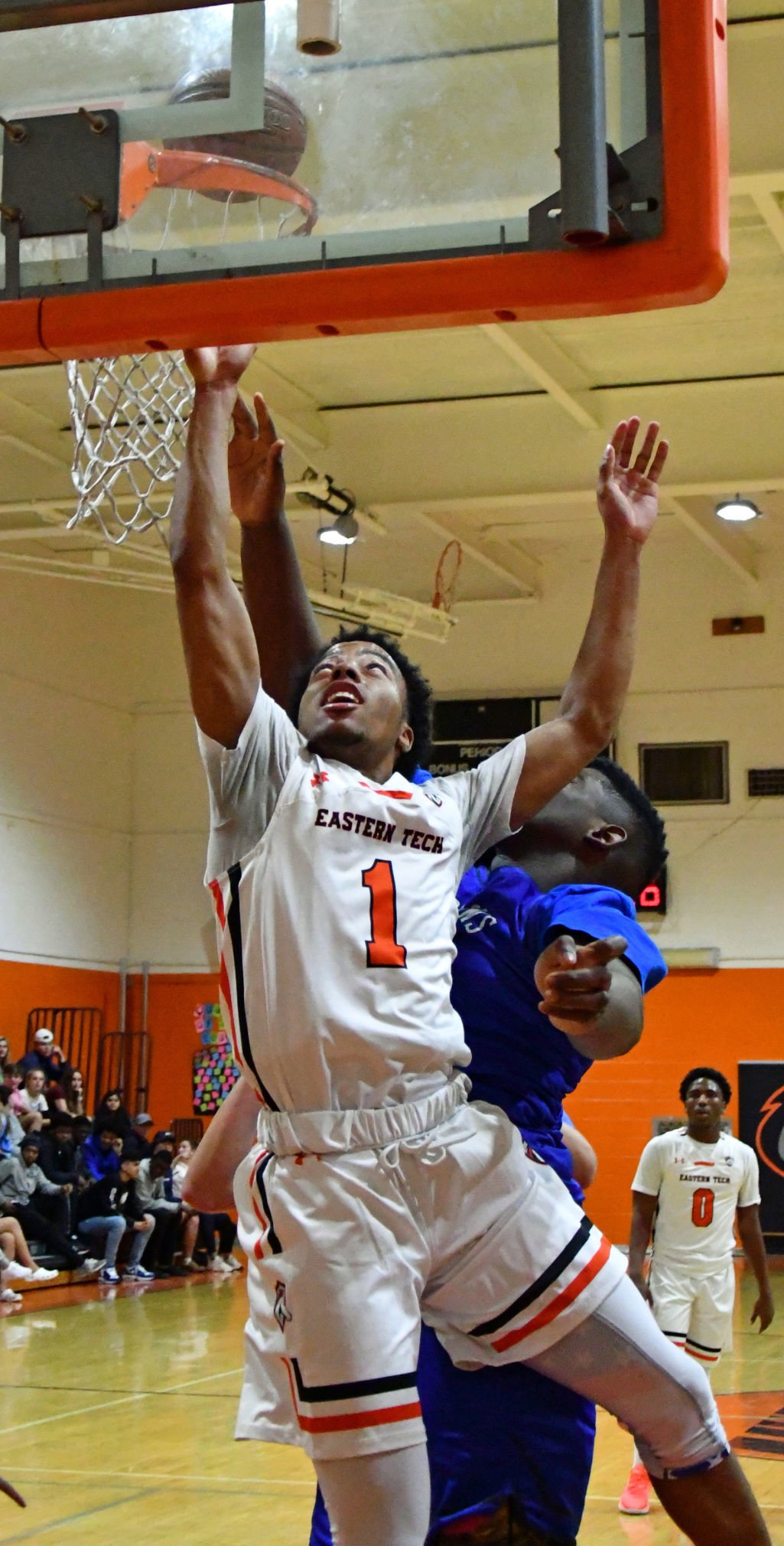 Kamren Walton scores two of his 19 points against Sparrows Point. 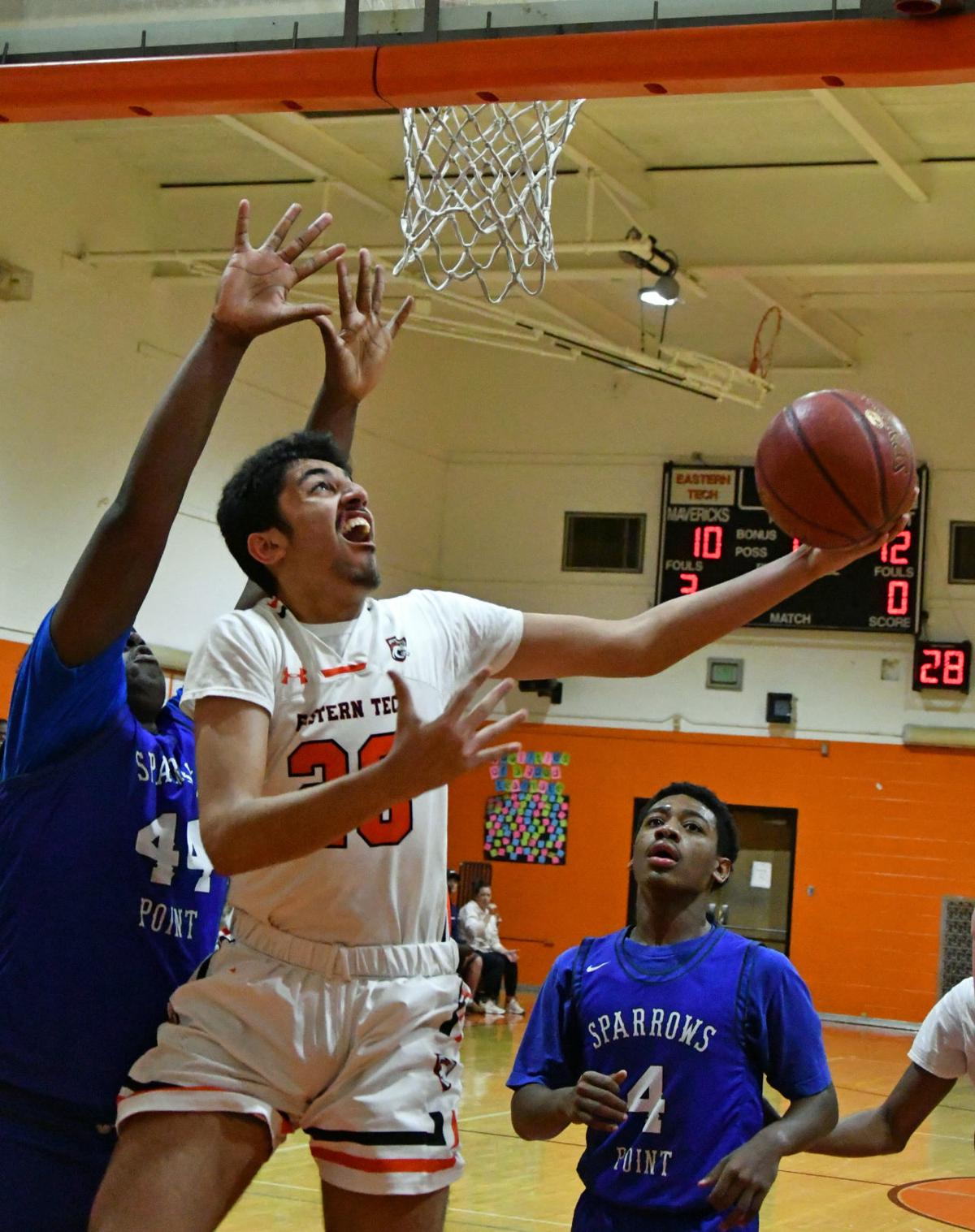 Shazeeb Cheema puts up a shot while defended by Sparrows Point’s Omar Reid. 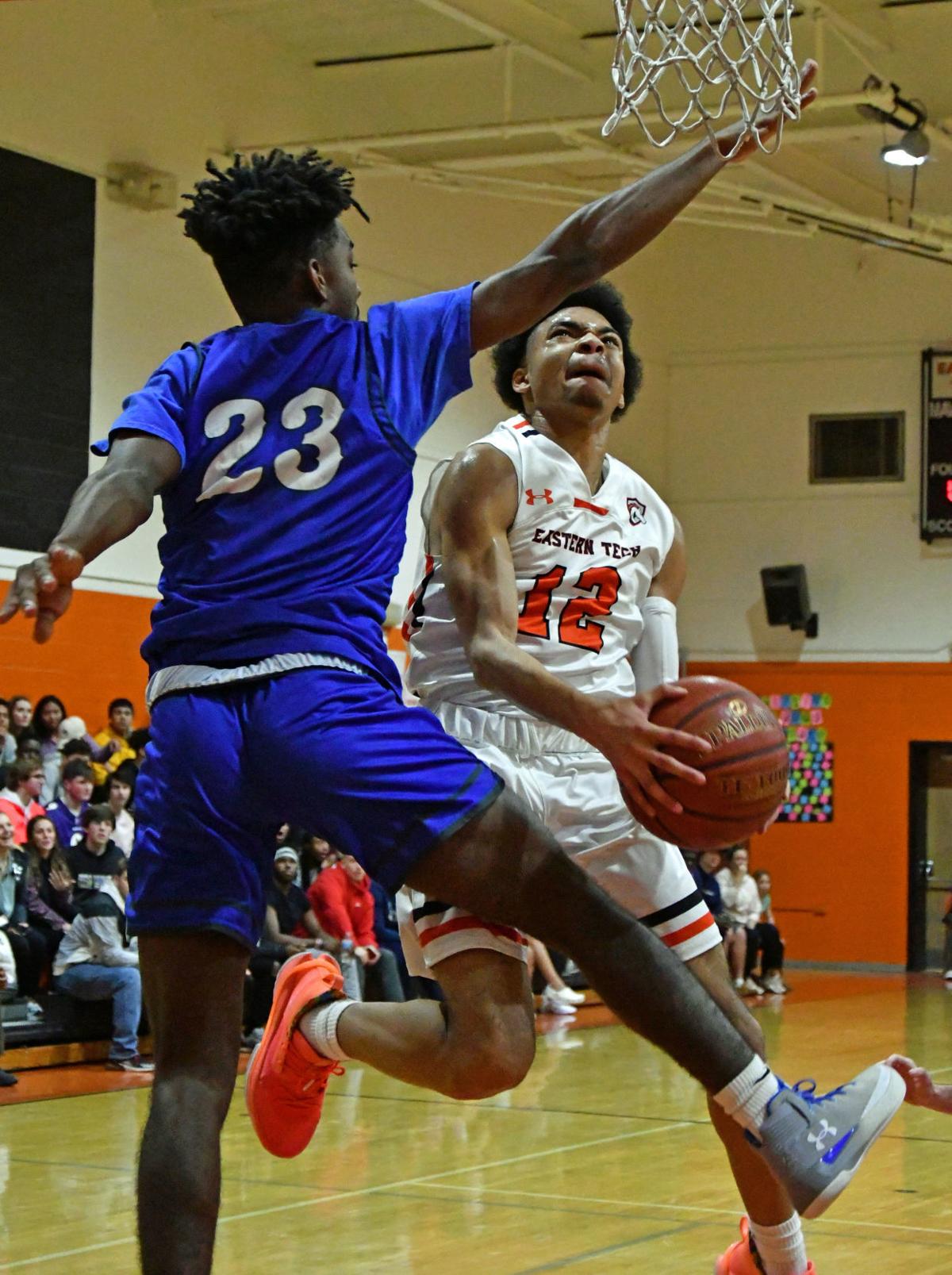 Jordan Brooks drives to the basket against Jermaine Smith during Eastern Tech’s victory over Sparrows Point.

Kamren Walton scores two of his 19 points against Sparrows Point.

Shazeeb Cheema puts up a shot while defended by Sparrows Point’s Omar Reid.

Jordan Brooks drives to the basket against Jermaine Smith during Eastern Tech’s victory over Sparrows Point.

Had the Eastern Tech boys basketball team not held on to defeat Sparrows Point on Friday for the Mavericks’ first win of the season, they would have spent the weekend practicing free throws.

“We’re going to do that, anyway,” Maverick coach Brian James said after Eastern Tech edged the Pointers 54-52. “All day tomorrow. There’s been maybe one game where we shot over 50 percent from the line.”

The only successful shot was the last — with eight-tenths of a second left to play.

For the game, the Mavericks missed 11 of 18 foul shots.

Eastern Tech (1-6) managed to win because it held Sparrows Point scoreless over the last 3:30 of the game. And the Pointers missed two free throws with 1:25 remaining that would have given them the lead.

“We just buckled down, played man-to-man, focused on making it hard for number 11 to get the ball,” James said. “When he got the ball, everyone came in to help, make sure others had to beat us.”

Number 11 was Sparrows Point’s Ramon Villanueva, who scored a game-high 29 points. No other Pointer had more than eight points.

Trailing 52-48 with under three minutes remaining in the game, Eastern Tech got a layup from Phene Jean-Caude and a follow-up by Shazeeb Cheema to tie the score at 52-52 with 2:06 left to play.

Trevor Knight made one of two free throws for a 53-52 Maverick lead with 1:56 remaining in the game.

Then it got nerve-wracking for the home team.

Sparrows Point had six shots to potentially win the game, but missed all five (in addition to the aforementioned missed free throws).

One of the Pointer misses, with under 30 second remaining, looked like it was dropping in, rolled around the rim, than spun out.

Sparrows Point grabbed the rebound, but the ball slipped out of a player’s hands and went out of bounds to Eastern Tech.

The Mavericks, however, refused to clinch the game. On three consecutive possessions, they missed the front end of a one-and-one, two free throws, and two free throws.

After missed foul shots four and five, however, the rebound was declared a jump ball, and the possession arrow was in Eastern Tech’s favor with one second left in the game.

This was the first win for James as a varsity head coach. He coached the Catonsville junior varsity girls for five years.

“We’ve lost a couple of close games, he said. “We get down in the first half, play better in the second half. I’ve been telling the guys, we need to put two good halves together.

“We’re focusing on limiting turnovers. That kept us in the game. You make turnovers, you don’t get shot attempts.”