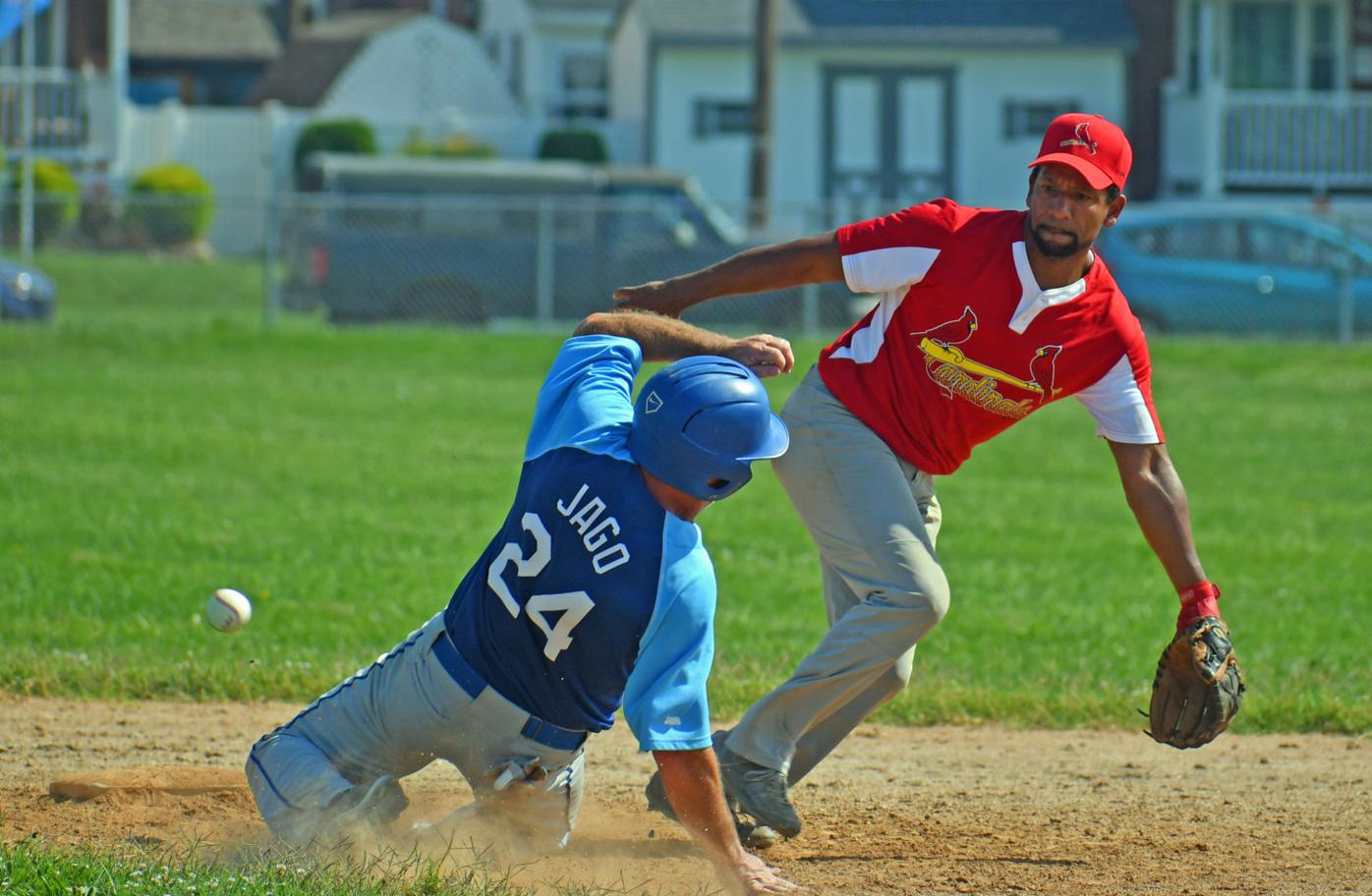 Jeff Jagosinski pf the Royals slides into second base ahead of the throw to Cardinals second baseman Juan Zayas. 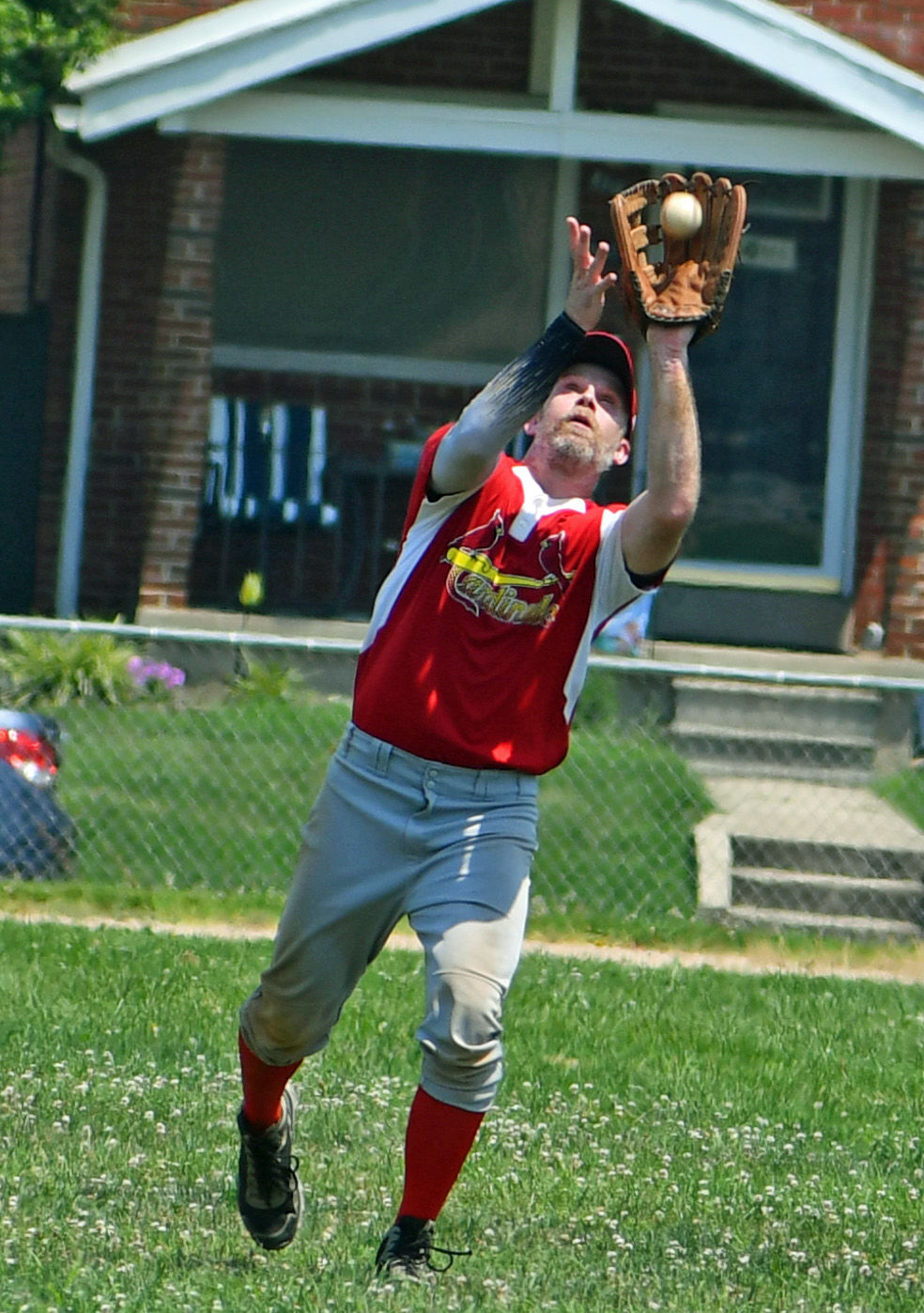 Cardina;ls outfielder Brian Marvin makes a catch for the final out of the 13-11 win over the Royals.

Jeff Jagosinski pf the Royals slides into second base ahead of the throw to Cardinals second baseman Juan Zayas.

Cardina;ls outfielder Brian Marvin makes a catch for the final out of the 13-11 win over the Royals.

It looked like the Cardinals were in a bad way in their Eastern Baltimore County Over-40 League baseball game against the host Royals on Sunday at Patapsco High.

The Royals led 7-2 after six innings and the Cardinals hadn't shown much life at the plate.

The Cardinals had access to shade, allowing some shelter from the sun, while the exposed Royals wilted as the sun climbed higher in the sky and brought the heat index along with it.

A seven-run rally in the seventh inning gave the Cardinals an 8-7 lead, and they held on for a 13-11 victory that improved their record to 2-1.

The Royals fell to 1-2. For both teams, the regular season is already at the mid-point. The league missed nearly three months due to the COVID-19 pandemic.

Members of the Royals said it was rough not to have any shade. The Cardinals were just glad one of the players had thought to bring the canopy along.

Th top of the seventh started with a bloop single by Chris Mirabile that dropped into center field.

The Cardinals would send 11 batters to the plate that inning.

Dale Hunter followed with a double to right field, scoring a run. Pedro Zayas singled up the middle for another run.

Another bloop single and a walk loaded the bases for Joe Lancelotta. A grounder to shortstop produced an out at second, but a throwing error allowed two runs to score and put Lancelotta on second.

After a groundout and a walk, Joe Pyles singled through the right side to tie the score at 7-7, and an infield single by Angel Clark drove in the go-ahead run.

The Cardinals added five runs in the top of the eighth inning to extend their lead to 13-7 and seemingly lock up the game.

It was already nearing noon, and Over-40 League rules state no inning will be started past noon. So there would be no ninth inning.

The Cardinals again sent 11 batters to the plate in the eighth inning, keeping the Royals on the field under the sun.

Pedro Zayas had a two-run single to account for the other runs that inning.

But the Royals had one last surge, loading the bases with one out in the bottom of the eighth on two singles and a walk.

Paul Cerebelli dropped a single into center, scoring one run, and C.J. Rockhill singled up the middle with two outs for another run.

That brought up Bryan Wilhelm, one of the league's best power-hitters, with the bases loaded, two outs and his team down by four runs.

But there is no outfield fence at Patapsco. Wilhelm's drive to center was kept in front of the Cardinal outfielders and only two runs scored.

A flyout ended the game.

The Royals had taken a 5-2 lead with five runs in the bottom of the second, getting two bases-loaded walks and RBIs from Lloyd Fox (two) and Rockhill.

The Royals added two more runs in the bottom of the sixth with the help of three Cardinals throwing errors.

This week, the Astros host the Orioles at Post 38, the Cardinals host the Dodgers at Patapsco High, and the Royals host the Rays at St. Helena Park.