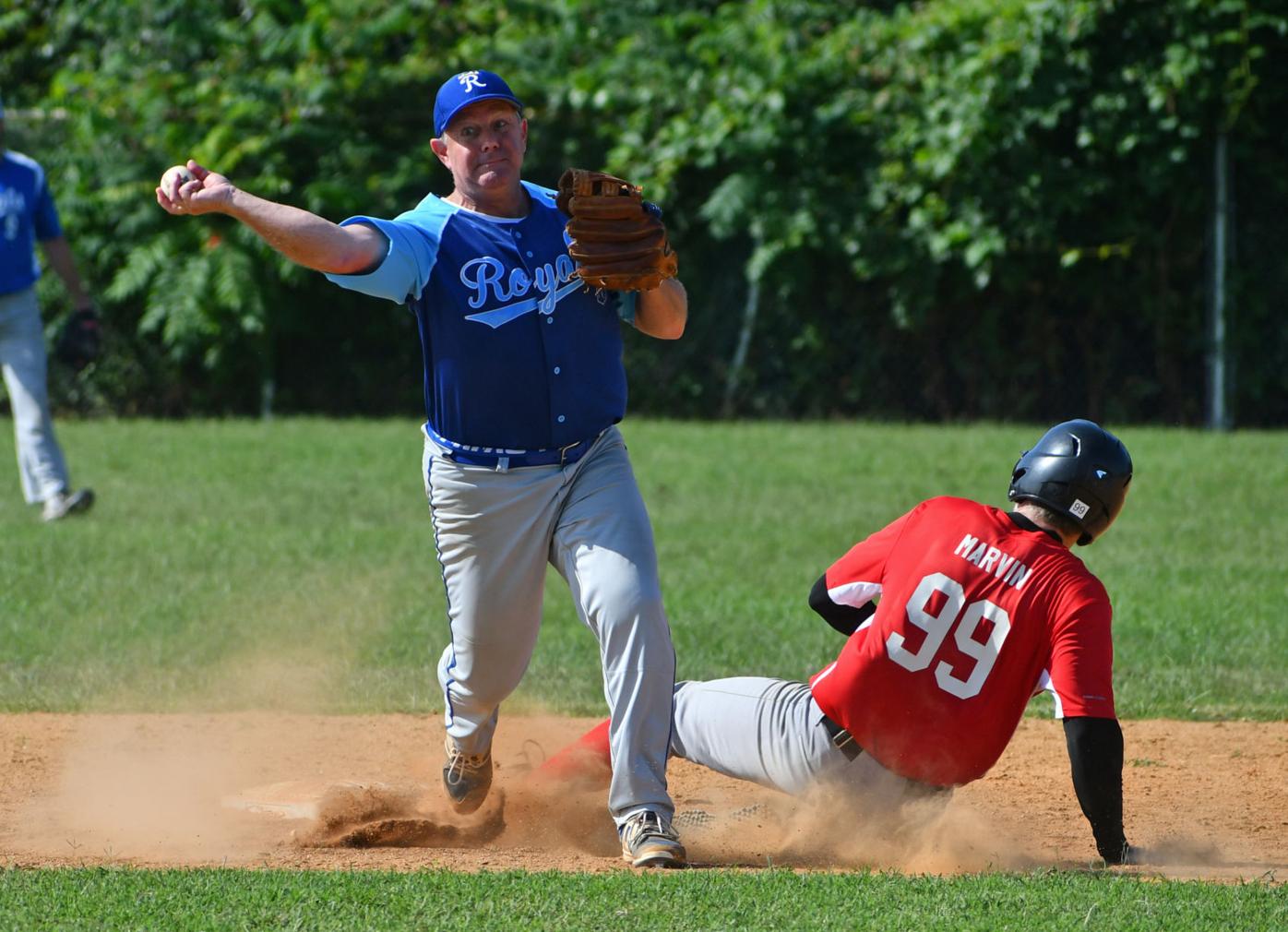 Royals second baseman lloyd Fox prepares to throw to first to complete a double play after forcing the Cardinals' Brian marvin out at second. 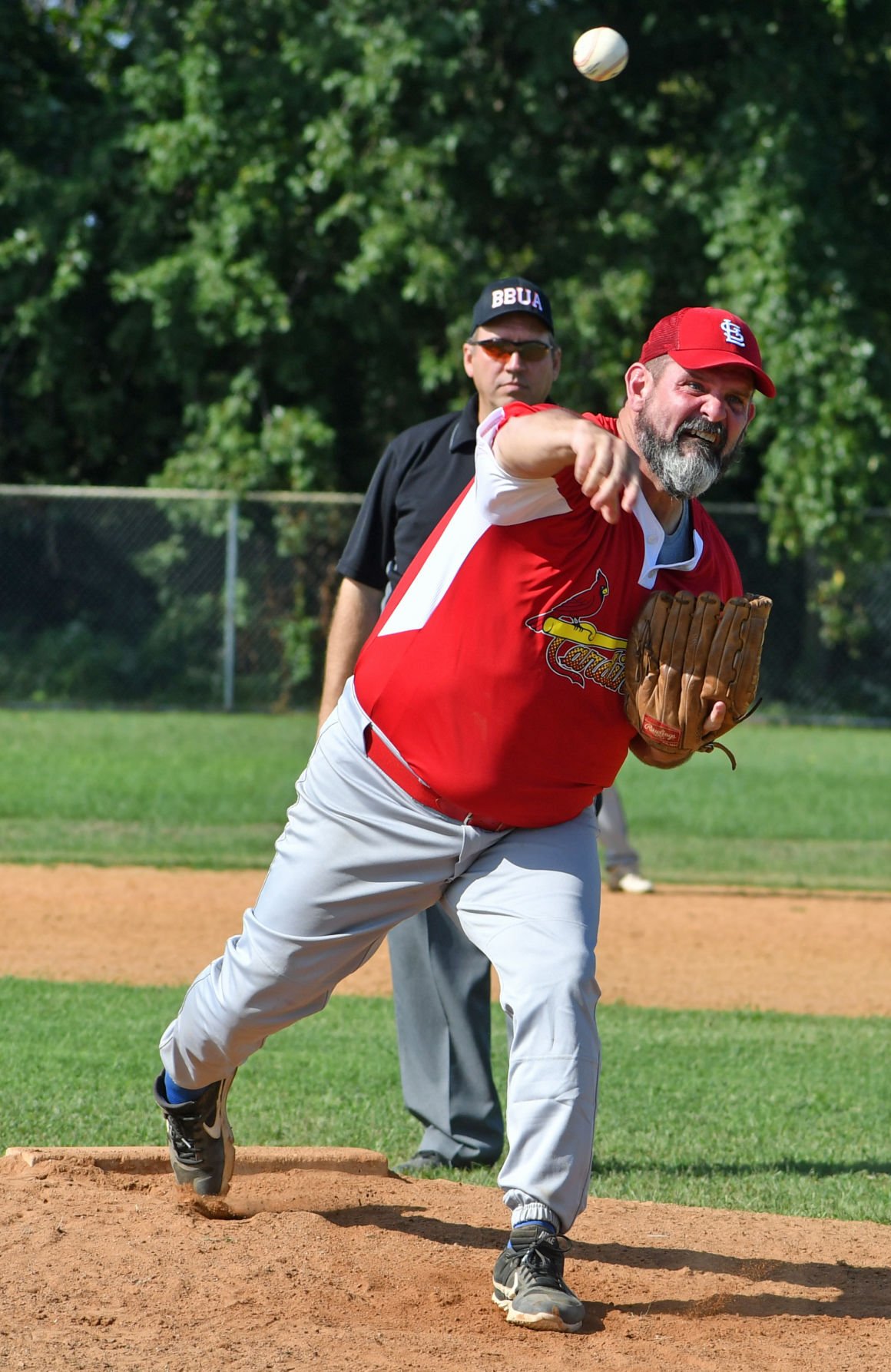 Cardinals pitcher Dale Hunter worked the fourth through eighth innings to help hold off the Royals. 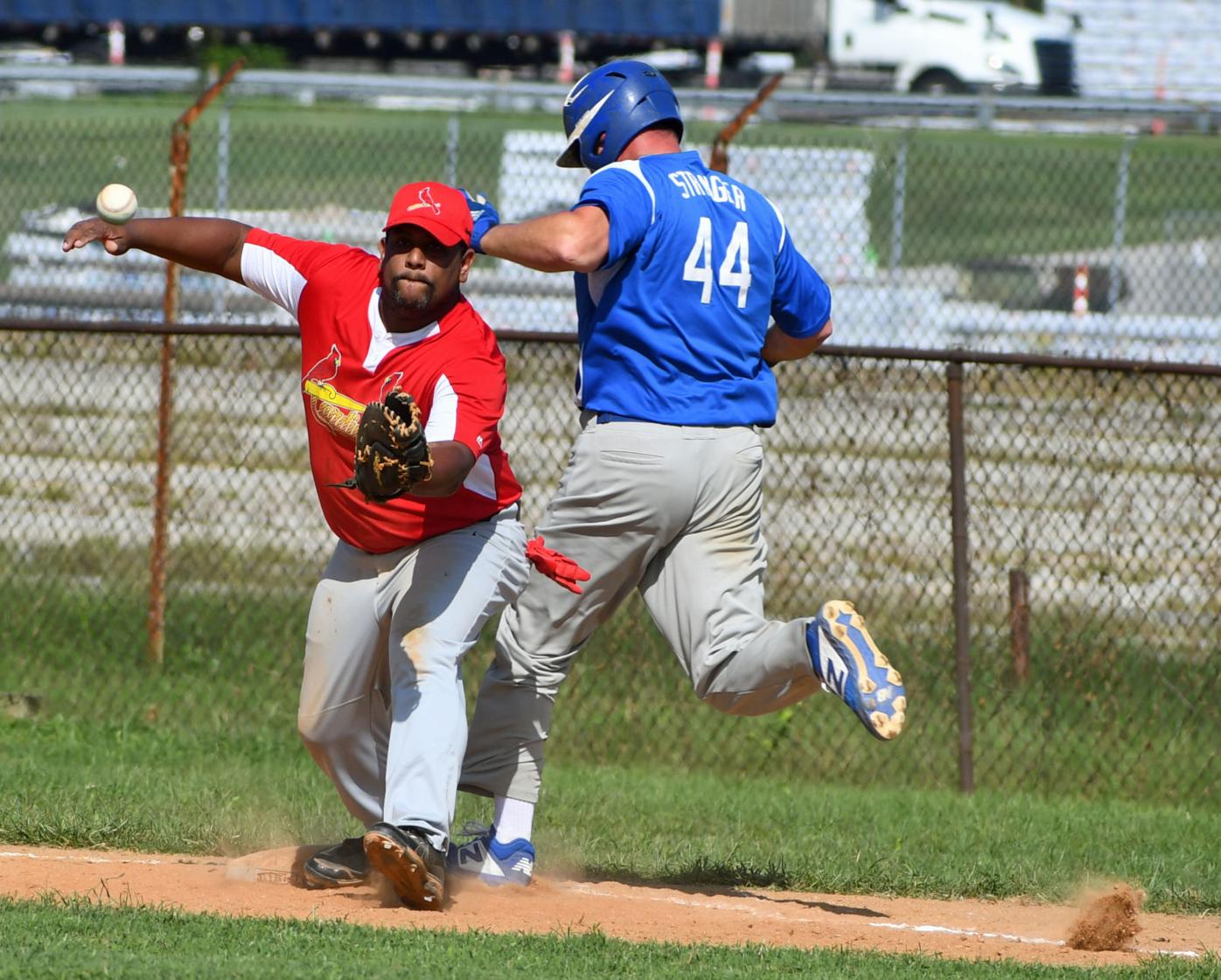 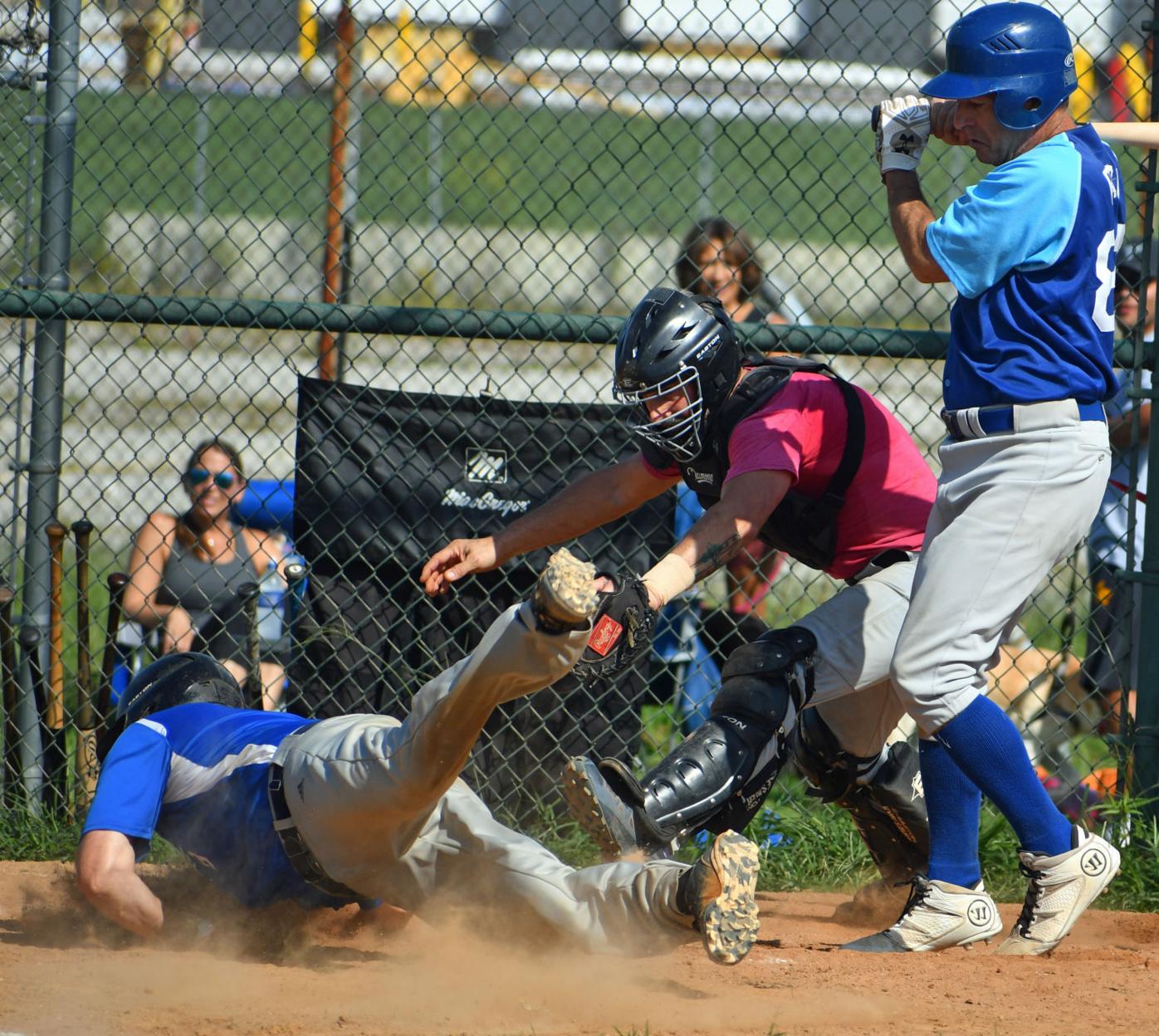 Andy Corcoran steals home plate ahead of the tag from Cardinals’ catcher as batter Jeff Patti ducks out of the way, 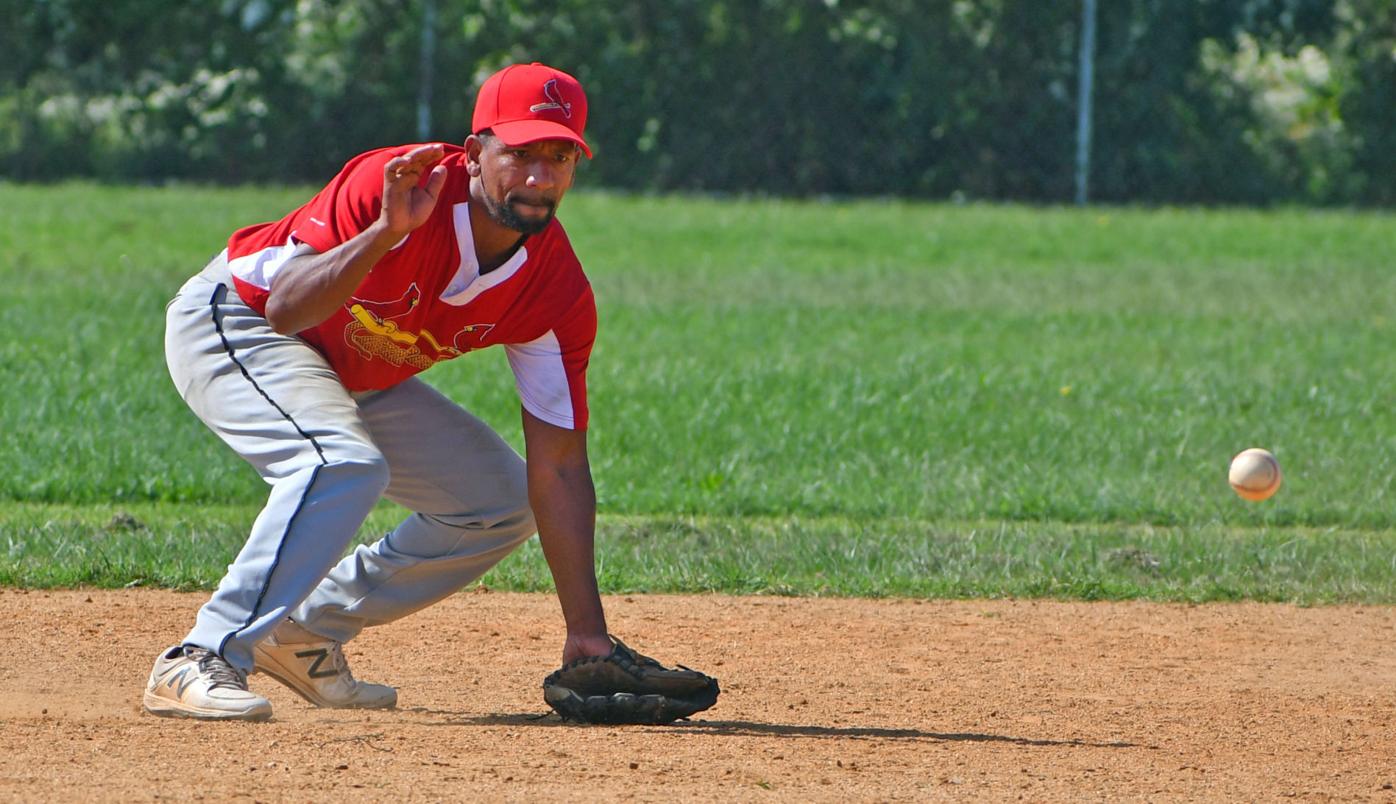 Juan Zaya prepares to field a ground ball for the Cardinals. 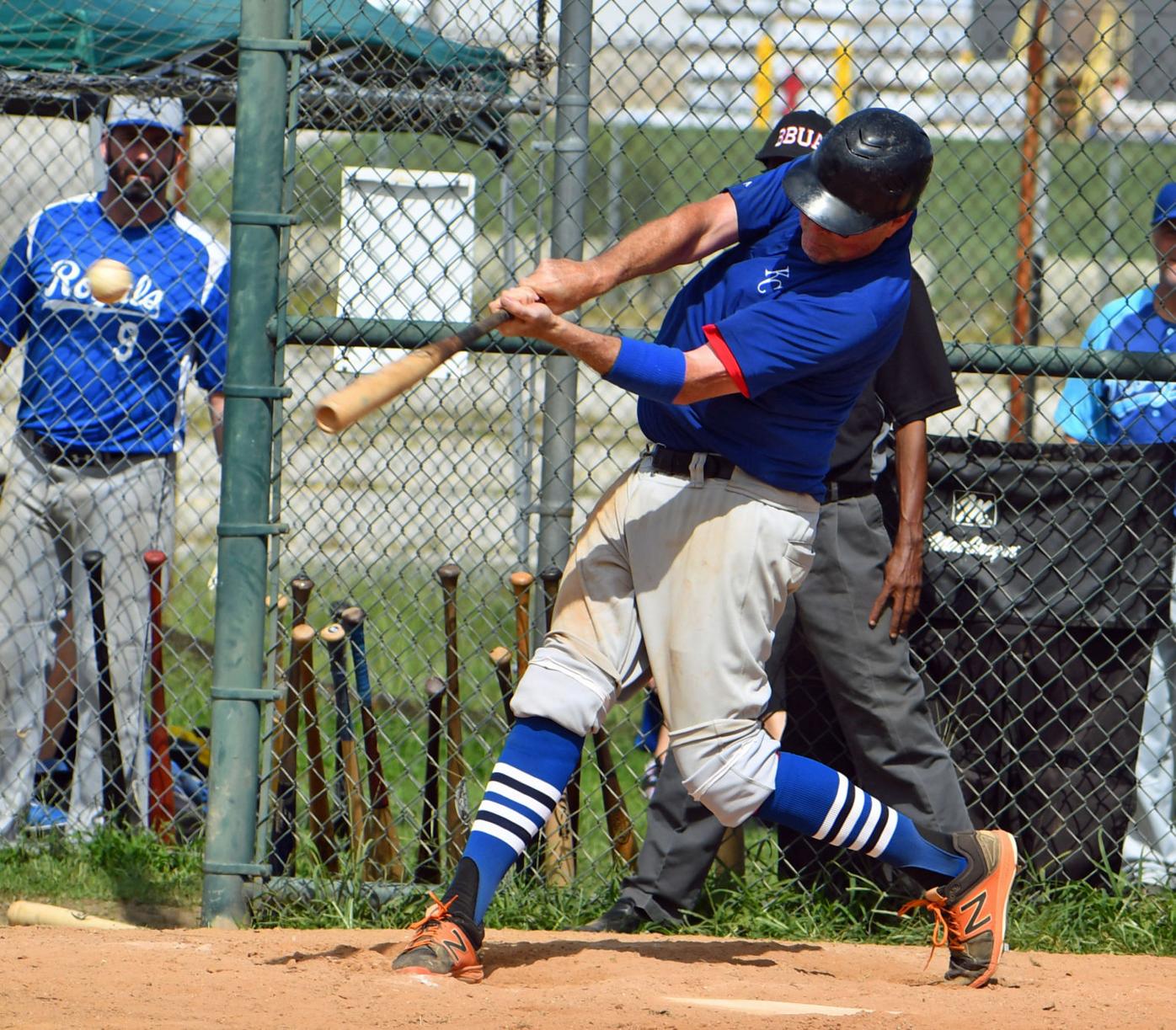 The Royals’ Dan Crowley drives a two-run double to center field to bring home two runs in the ninth inning and cut the Cardinals’ lead to 7-6. 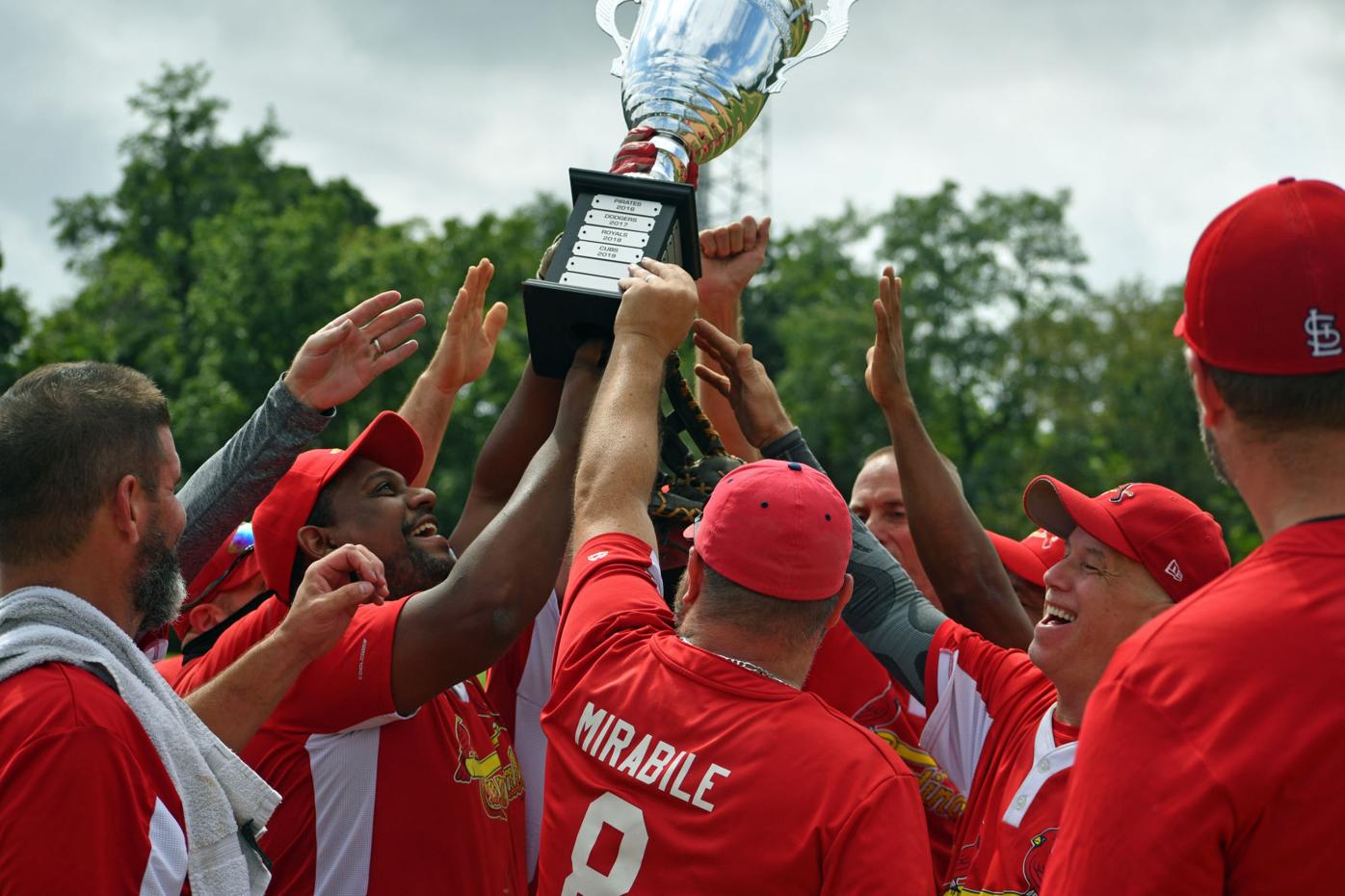 The Cardinals celebrate after winning the Eastern Baltimore County Over-40 Baseball League title.

Royals second baseman lloyd Fox prepares to throw to first to complete a double play after forcing the Cardinals' Brian marvin out at second.

Cardinals pitcher Dale Hunter worked the fourth through eighth innings to help hold off the Royals.

Andy Corcoran steals home plate ahead of the tag from Cardinals’ catcher as batter Jeff Patti ducks out of the way,

Juan Zaya prepares to field a ground ball for the Cardinals.

The Royals’ Dan Crowley drives a two-run double to center field to bring home two runs in the ninth inning and cut the Cardinals’ lead to 7-6.

The Cardinals celebrate after winning the Eastern Baltimore County Over-40 Baseball League title.

Dale Hunter helped pitch the Cubs to the 2019 Eastern Baltimore CountyOver-40 Baseball League title, but the defending champs opted not to return this season when the league played an abbreviated schedule due to the COVID-19 pandemic.

So Dale and two teammates, Chris Mirabile and Scott Rudolph, joined the Cardinals.

Sunday, Hunter helped pitch the Cardinals to a 7-6 win over the Royals in the league postseason tournament championship game at the Legion Post 38 Field.

So much for an ex-Cubs Curse in this league.

Hunter pitched the fourth through the eighth innings and got out of a couple of tough spots as the Cardinals held off the Royals.

The Cardinals led 4-0 after two innings. The Royals cut it to 5-4 entering the seventh inning.

The Royals could have led, but were unable to take better advantage of an opportunity in the fifth inning.

A walk, hit batter and a bunt single loaded the bases with no outs. But the next five batters were unable to get the ball out of the infield, and the Royals only scored two runs to close to within 4-3.

One run scored on a fielder’s choice grounder from Lloyd Fox, and the second run scored when Andy Corcoran stole home.

Hunter got a called third strike on a batter for the second out with the bases loaded, and the inning ended with a groundout to second.

That would be the Royals best opportunity until the ninth, after Hunter left the mound due to innings limit with the Cardinals leading 7-4.

Two walks and a single loaded the bases with one out and brought the go-ahead run to the plate.

After a flyout to shallow right field, Dan Crowley lined a single to center to score two runs. Relief pitcher Justin Padin, who started that inning, slipped a called third strike past the next batter to end the game.

“I just throw off-speed pitches, try to keep the hitters off-balance,” Hunter said. “I’m just happy to be able to play the game I love at age 51.

“The [fifth inning] was kind of rough. But I buckled down and got some help from my infield and outfield. It was kind of easy after that.”

The Royals hurt themselves with a couple of errors in the seventh inning to hand the Cardinals what turned out to be two crucial runs.

Angel Clark started the inning by reaching base on an infield error. Clark then stole second, went to third on a throwing error, and scored on another throwing error.

Two outs later, Hunter singled through the left side to score Brian Marvin for a 7-4 lead.

“We threw the ball around too much,” Royals manager Jeff Patti said. “And we didn’t hit.”

The Cardinals’ victory makes it five different champions in a row for the Over-40 League: Pirates, Dodgers, Royals, Cubs and Cardinals.

Prior to that, the Dodgers had won four straight titles, and then the Pirates went back-to-back.

“We built this team over the last three, four years, went out and got a lot of the right guys,” Cardinals manager Pat Heinecke said. “I thought we would go all the way this year.

“I just feel blessed to be able to get out here and play.”

The Cardinals had been plagued with pitcher injuries the past few years, and the season started on an ominous note when Rudolph inured his knee in the season opener and had to sit out the season (although he was present at every game).

But he was the only injury, and the Cardinals went through the season with the trio of Chris Buckhold, Hunter and Padin.

The Cardinals were missing another player when Bryan Pascuzzi fell ill last week and was unable to play. The team dedicated the game to him.

The Royals and the Cardinals both finished 4-2 during the shortened regular season, with the Cardinals winning the regular-season matchup 13-11.

In the postseason semifinals, the Royals knocked off the top-seeded Astros 14-12, while the Cardinals dismissed the Dodgers 6-3.

There was a little controversy in Sunday’s title game.

With two outs and a runner on second in the bottom of the first inning, the runner attempted to steal third and the Royals felt he was out.

Instead of the inning being over, the Cardinals went on to score three runs on RBI singles by Buckhold, Mirabile and Hunter.

(The first two Cardinal batters in the first flew out to left. The Cardinals feel one of those balls was dropped but still ruled an out.)

The Royals got a run in the third inning on a leadoff double by Ryan Moran followed by two infield groundouts.

The Cardinals went up 5-3 in the bottom of the fifth as Pedro Zayas led off with a single, went to second on a groundout and scored on a single by Juan Zayas.

The Royals matched that run in the top of the sixth on an RBI from Bryan Wilhelm.