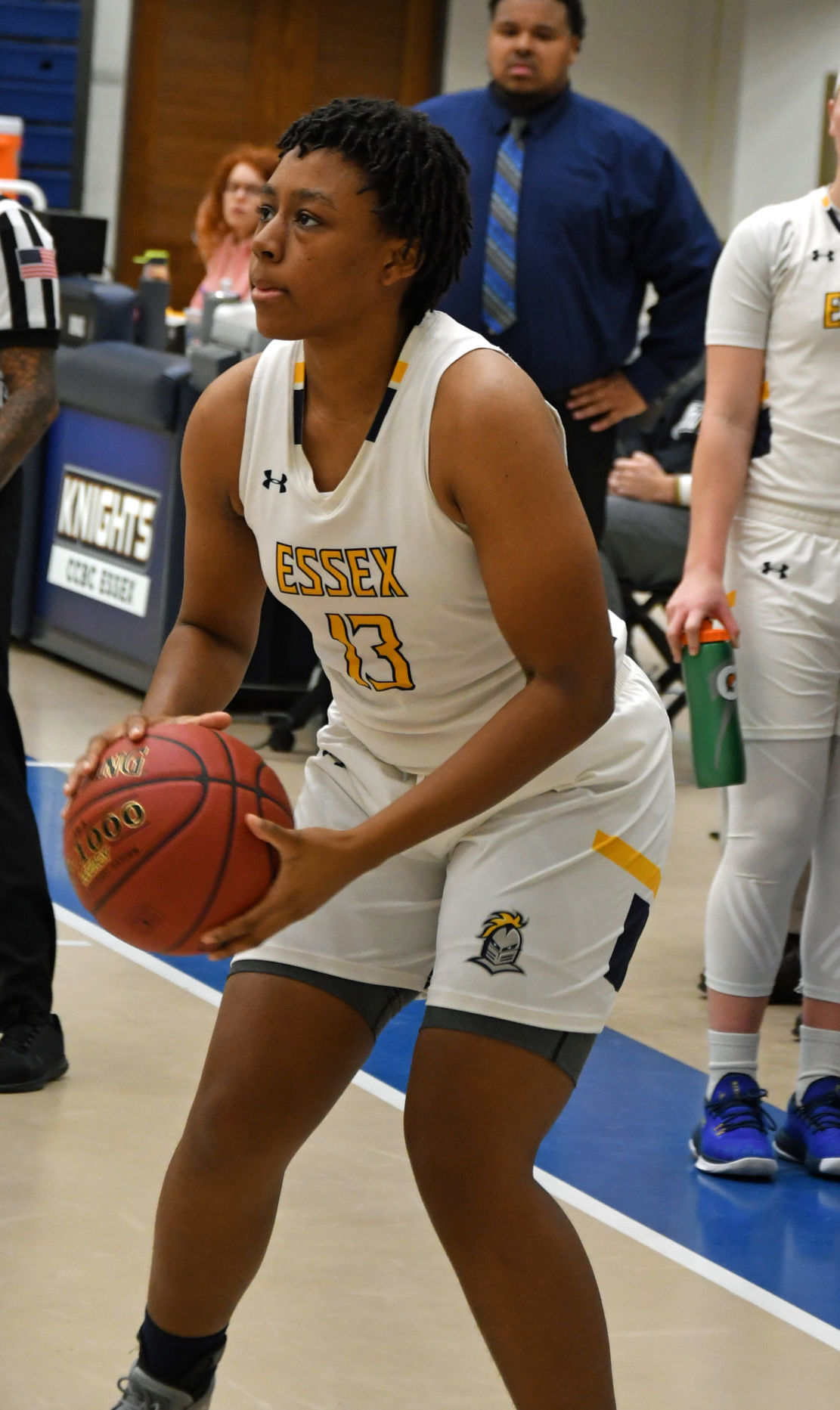 Trinity Horton prepares to take a shot during the CCBC Essex victory over Potomac State on Saturday. 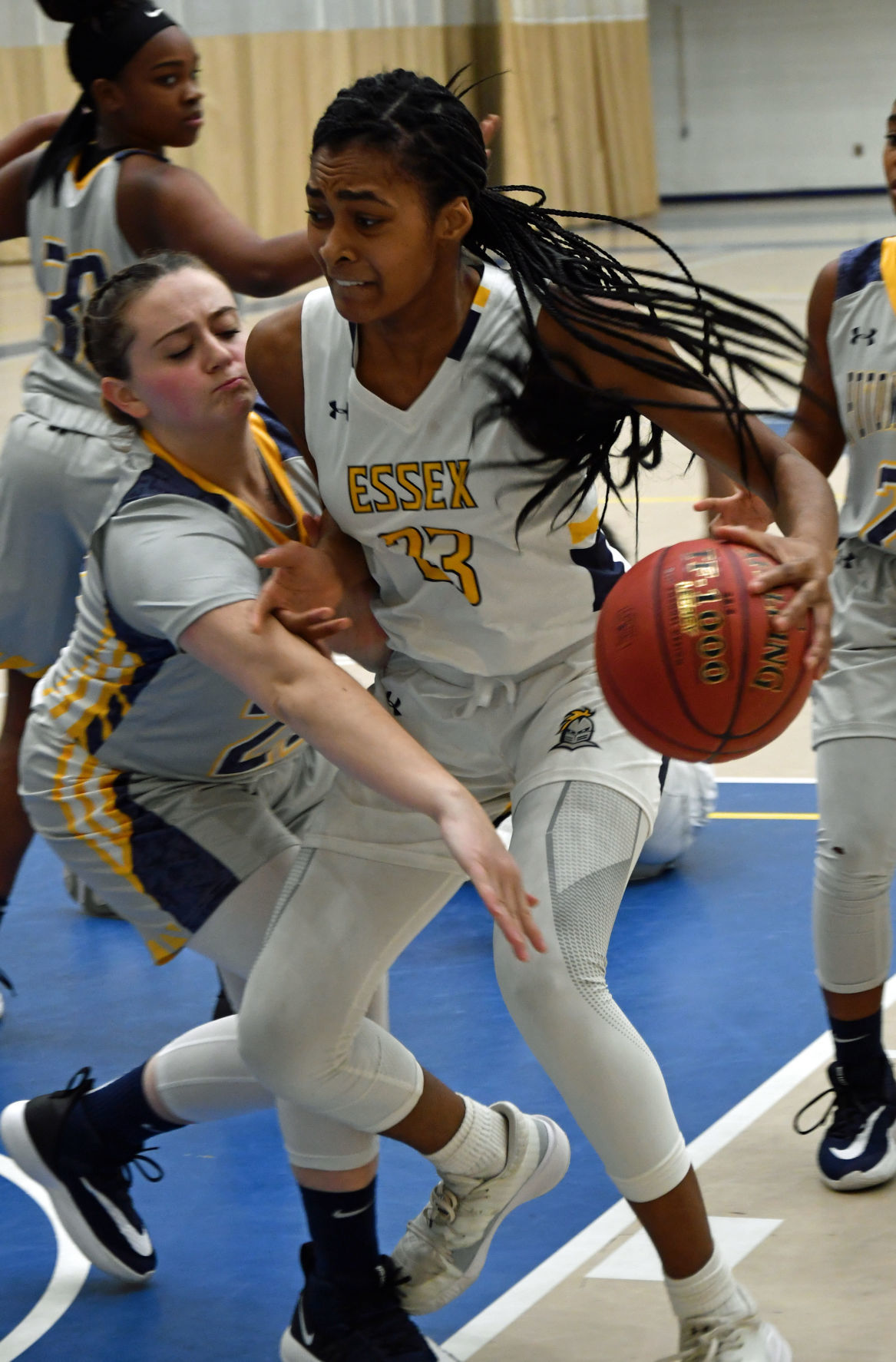 Trinity Horton prepares to take a shot during the CCBC Essex victory over Potomac State on Saturday.

Entering this season, CCBC Essex hadn’t had a women’s basketball program in over 15 years.

Now they have one of the best in the country.

The Knights (10-1) are ninth in the National Junior College Athletic Association rankings this week — and they haven’t even started playing their best basketball.

Consider that head coach Mike Seney had to start a new program from the ground up. And that none of the 15 players on the roster had played together prior to this season.

So they’ve been learning to gel as a team — and they’re 10-1 during that period.

“The transition period is happening right now,” Seney said after a 100-71 win over visiting Potomac (West Virginia) State College on Saturday. “We have no returning players to lead the way, we’re still not really where we need to be.

But we’re so talented, so deep, that will hold us over.”

Seney came to CCBC Essex from Harford Community College, where his success leading the Owls helped convince talented players to take a chance on a first-year program.

“No matter where you are, as long as you have that pedigree, people are going to want to join your program,” Seney said. “At Harford, I was able to show off that pedigree. My staff stands on our record at what we did at Harford.

“I worked my butt off to get a deep, talented roster. I’m glad the nation is starting to recognize us.”

They, along with 5-6 guard Ka’Lerra Reed (Trinity Valley Community College), are the only sophomores on the roster.

“Players may have been under-recruited, or not in the right situation. Junior colleges become a stepping stone to get to where you want to be. A second chance for players who need one.”

The Knights are also 10-1 despite being a road show for much of the first month-and-a-half of the season.

Last weekend’s games against Potomac State and on Sunday against Community College of Beaver County (a 103-46 win) were the first home games for Essex since Nov. 2.

The unfamiliarity with the gym may have been responsible for a sluggish start against Potomac State.

The Knights only led 43-38 at halftime, and the 1 points was only the fourth time this season an opponent has broken 70 points.

“We didn’t shoot that well in the first half, and the defense was lacking as well,” Seney said. “We turned up the pressure in the third quarter and got our offense moving as well.

“We were very disappointed they scored 71 points. “We work very hard on the defensive side of the ball, and as a coach, you hope the results show it.”

Essex outscored Potomac State 24-12 in the third quarter, and added 33 points in the fourth quarter against the worn-down Catamounts.

The Knights led Beaver County 49-22 at halftime and completely blew open the game with a 34-9 fourth quarter.

Flynn and Kendall Haggerty each scored 15 points, with Moye and Gagen each scoring 12.

Amiyah Holmes handed our seven assists, while Moye and Gagen each had six.

The Knights’ only loss has been at Wake Technical (N.C.) Community College on Nov. 10.

Essex led 33-28 at the half and held a 47-42 lead entering the fourth quarter. Wake County outscored Essex 25-14 over the last eight minutes.

The home team was 25-for-36 from the foul line, while the Knights were 18-for-26. Essex shot 23 percent from the floor for the game, while wake County hit 43 percent of its shots.

Essex plays at Harford on Thursday and at the Niagara County Community College Thunderwolves Classic on Saturday and Sunday, then returns home to play Chesapeake College on Dec. 18.

“Since I took this job, our goal has been the national championship,” Seney said. “Our goal is to bring one home. We feel we’re talented enough.”