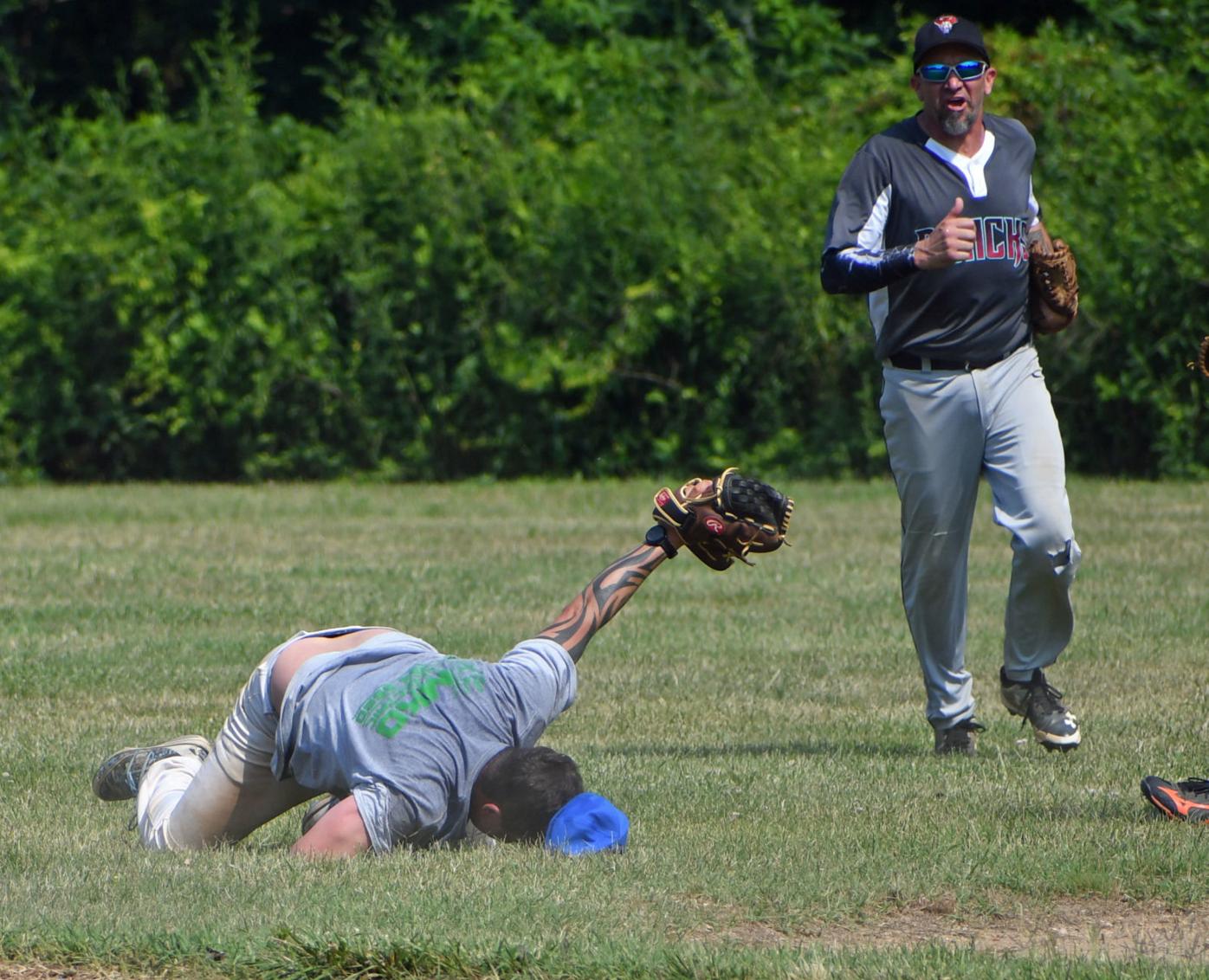 Mike Young of the Diamondbacks holds up to ball to show he successfully made a backwards, falling-down catch. Chad Farmer ids the centerfielder. 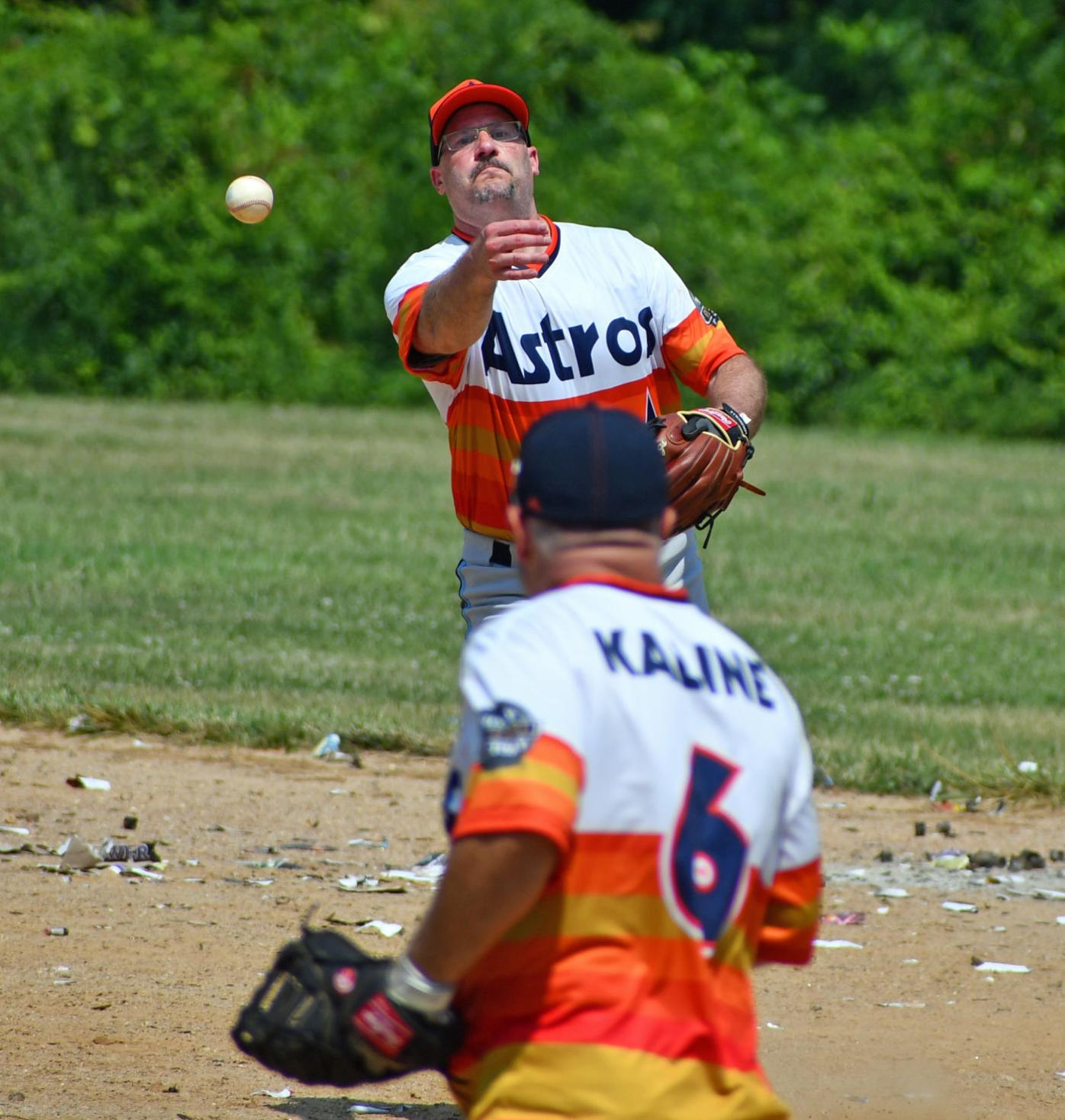 Darren Schillinger tosses the ball to Doug Kaline for an out at first during a recent Over-40 League game. The Astros (4-0) are in first place in the league.

Mike Young of the Diamondbacks holds up to ball to show he successfully made a backwards, falling-down catch. Chad Farmer ids the centerfielder.

Darren Schillinger tosses the ball to Doug Kaline for an out at first during a recent Over-40 League game. The Astros (4-0) are in first place in the league.

The Astros stormed through the Eastern Baltimore County Over-40 Baseball League last season, until they were stunned in the league championship game by a Cubs team they had already beaten twice during the regular season.

Winning their first two games by a combined score of 23-7, the Astros are off to another strong start. This time, the Cubs aren’t around to stop them.

The Cubs opted to take the season off when the COVID-19 pandemic delayed the start of the regular from April to last week ands reduced the regular season to just six games.

The likely playoff format will have all seven teams advancing to the postseason and seeded based on regular-season record, with the top seed getting a bye and a play-in game between the sixth and seventh seeds.

(This is subject to change.)

The Astros took advantage of two bad innings by the Diamondbacks for a lopsided 14-3 win on Sunday at St. Helena Park.

Five runs in the third inning gave the Astros a 7-1 lead, and five more runs in the sixth inning essentially put the game away.

In both innings, the Diamondbacks (0-2) gave and the Astros exploited.

Joe LoBianco led off the bottom of the the third with a pop single to left, and Don Smith followed with a bloop single to shallow right.

A throwing error allowed a run to score.

After a flyout, Jerry Gastiger hit a grounder to shortstop. The Diamondbacks attempted to get the runner advancing to third rather than try for Gastiger at first, but he was safe after a rundown.

Doug Kaline then drove in a run with a single to left, and Sean Sesney added an RBI single to right.

Still leading 7-2 in the sixth inning, the Astros put up five unearned runs to make it 12-2.

Two infield errors kept the inning from ending after five batters. Instead, the bases were loaded with one out and one run in.

Corey Randolph drove in a run with a groundout to first, LoBianco smacked a two-run double to deep right, and the final run of the inning scored on another infield error.

“We didn’t have any chance to work together before the season started,” Diamondbacks manager Rob Lee said. “But I still think we’re a team that can make a run in the playoffs.

“This team has been together for a bit now. We were added to the league in the second season [2011] so we have somewhat of a brotherhood. We enjoy playing together on Sundays, and although the past few years we haven’t played as well, we still enjoy seeing each other and we love playing.”

Lee, the first batter of the game, singled and came around to score on a groundout to give the Diamondbacks a quick1-0 lead.

But Cundiff, the Astros starter and manager, retired 12 of 13 batters at one point in the first though fourth innings.

At one point, Cundiff fanned five of six batters.

Jim Hooper led off the Diamondback fifth with a single and an infield error with two outs kept the inning alive.

Tim Brownell came through with an RBI single, but the next batter popped out to Cundiff.

The Diamondbacks put two runners on with a walk and infield single in the sixth, but Cundiff got out of the inning with a groundout.

Cundiff struck out eight in six innings and gave up four hits.

In the seventh, trailing 12-2, the Diamondbacks loaded the bases with no outs. But they were only able to get one run out of it, on Lee’s groundout.

The Dodgers- Royals game was postponed.