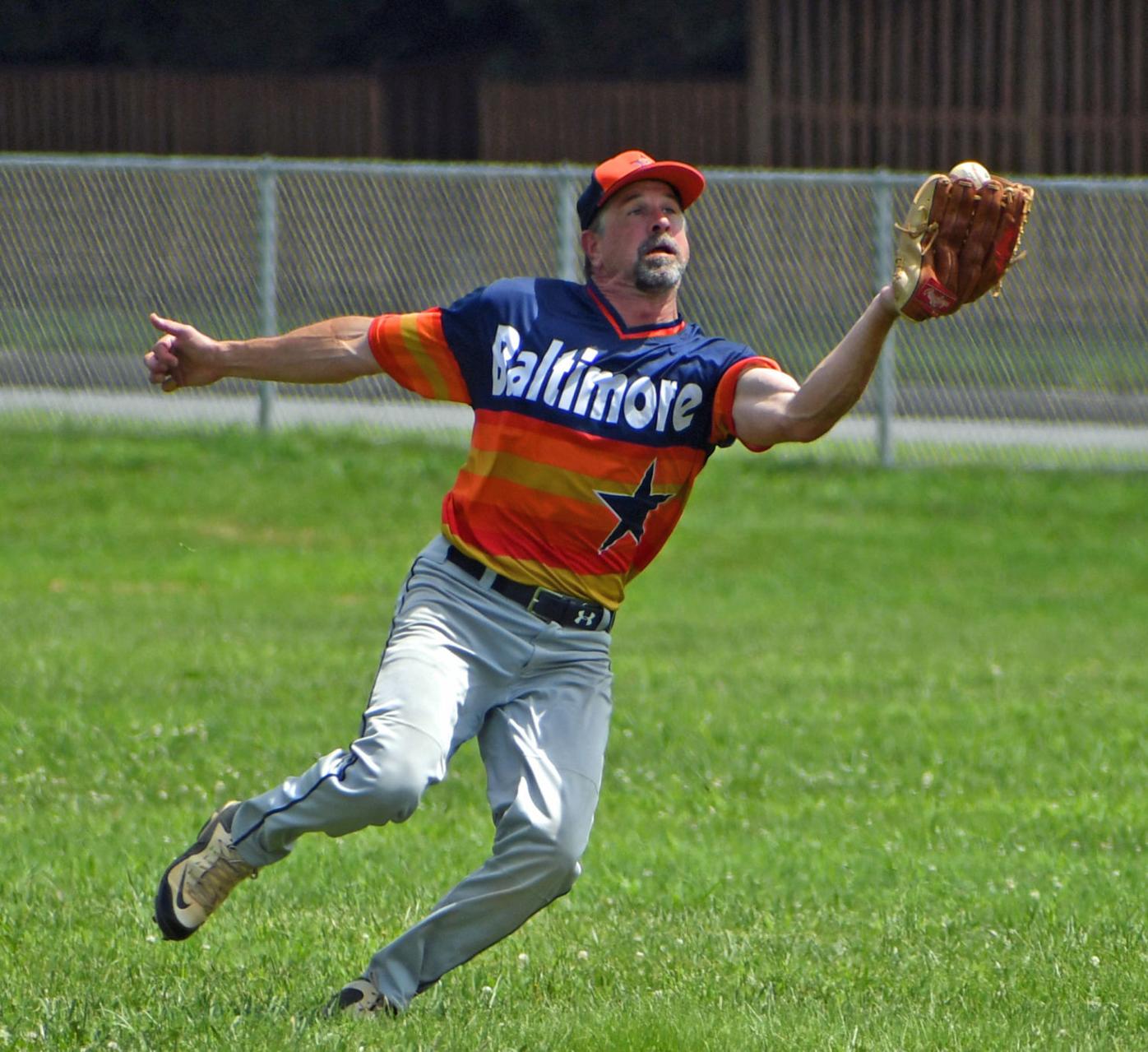 Joe LoBianco snags the ball at the top of his glove after making a running catch against the Rays. 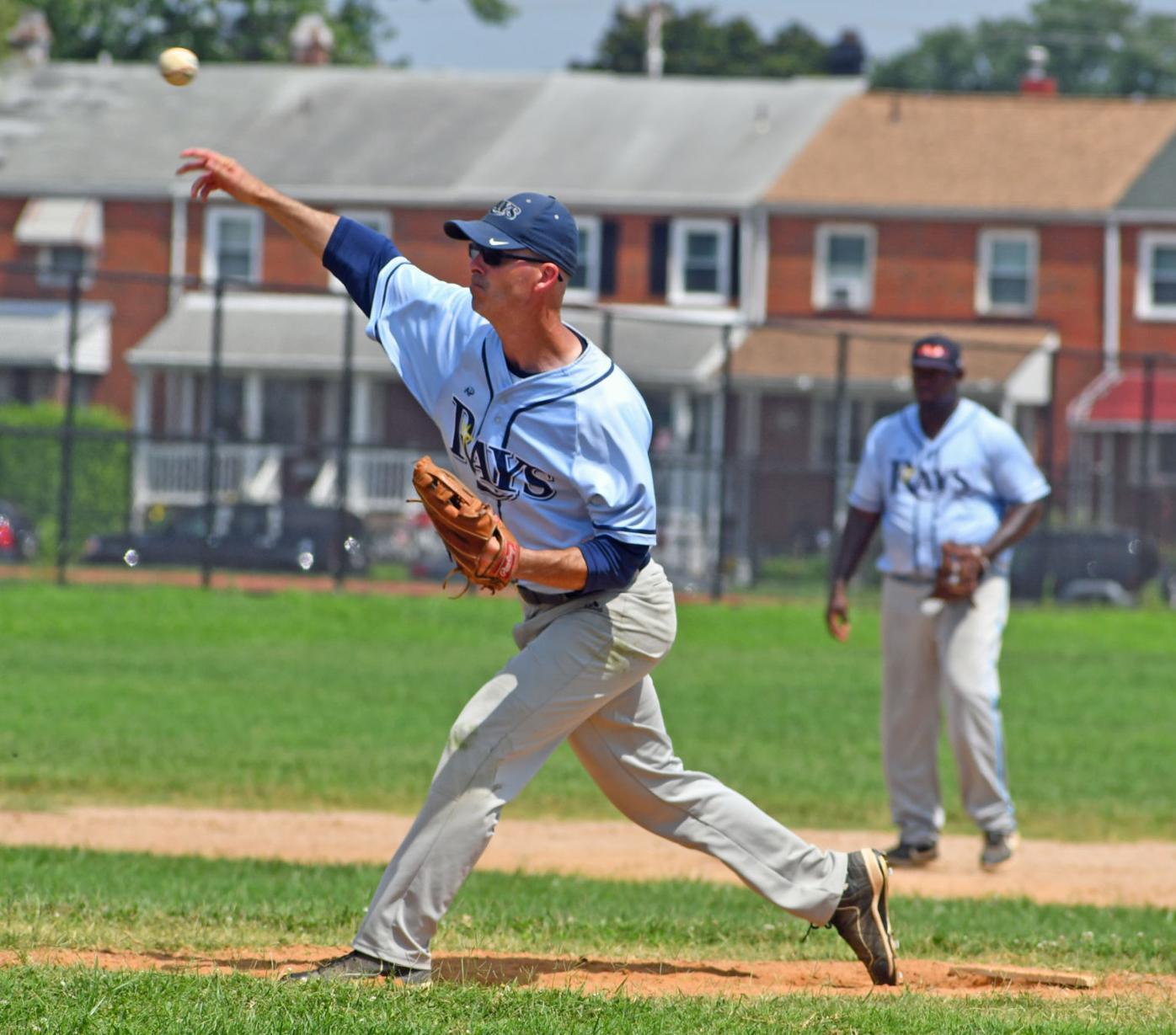 Rays pitcher Josh Lamont delivers a pitch during the loss to the Astros.

Joe LoBianco snags the ball at the top of his glove after making a running catch against the Rays.

Rays pitcher Josh Lamont delivers a pitch during the loss to the Astros.

In a game they ultimately didn't need to win, the Astros held off the Rays in an Eastern Baltimore County Over-40 Baseball League thriller on Sunday, 15-14.

With the victory, the Astros stayed unbeaten at 5-0 with one game remaining in the regular season.

If the Dodgers (3-1) lose to the Royals (2-2) in a makeup game that was to be played on Wednesday, the Astros clinch the regular-season title and the top seed in the postseason tournament.

A Dodgers' victory sets up a de facto regular-season championship game on Sunday with the Astros at the American Legion Post 39 field.

Should the Dodgers win, both teams will be 5-1 and the Dodgers will have the head-to-head tiebreaker, meaning a first-round bye in the postseason followed by a game against either the Orioles or Diamondbacks (both currently 0-4-1).

So regardless of the outcome of the Astros-Rays game, the Astros would still need to beat the Dodgers for the regular-season title.

But the possibility of finishing unbeaten doesn't come along every season.

Sunday's game at Patapsco High ended with the score 15-14, two outs, the tying run on third and the winning run on second.

"That's the point in the game where you really need to bear down," King said afterwards.

The Astros carried a 15-11 lead into the bottom of the ninth. Two singles and an error loaded the bases with no outs.

A single by Steve Kessler followed by a Rob Dolly hit made it a two-run game with the bases still loaded and no outs.

And that's where King bore down. A strikeout, an RBI fielder's choice and a strikeout ended the game.

It was a tough loss for the Rays, who were in contention for first place after a 3-1 start but dropped to 3-3 with their second straight loss.

They sent 11 batters to the plate in the bottom of the fifth inning to pull to within 9-8.

Kellen Wallace led off with a single, Sonny Weaver doubled and Erin Hickman singled to drive in a run.

Dolly had an RBI single and Josh Lamont doubled in a run. The last run scored when Wallace was hit by a pitch with the bases loaded.

The Astros re-built their lead in the top of the seventh on RBI singles by Joe LoBianco and King, and a Rays' throwing error.

But Dolly's well-hit liner to right-center was snagged by LoBianco, who made a running catch and held on with the ball sticking out the top of his mitt as he stumbled and rolled over on the ground.

Still, a walk and an error put runners on first and second with one out. But King got a strikeout and a grounder back to the mound to end the inning.

Had the Rays taken the lead, they likely would have won the game. The inning ended with seven minutes to spare until noon; league rules mandate no inning can start after noon, so the extra time needed to score two runs may have caused the game to end after eight innings.

Instead, the game went on to the ninth, where the Astros added what turned out to be a very important three runs.

A bases-loaded, one out double by Mike Aubele scored two runs, and Jerry Gastiger drove in a run with a groundout.

The other two games this weekend see the Orioles vs. the Royals at Patapsco High, and the Diamondbacks vs. the Cardinals (3-2) at St. Helena Park.

The postseason tournament begins the following week, with the Astros or Dodgers having a first-round bye and the Orioles vs. the Diamondbacks in a "play-in" game.

The other two first-round games will involve seeds two through five.