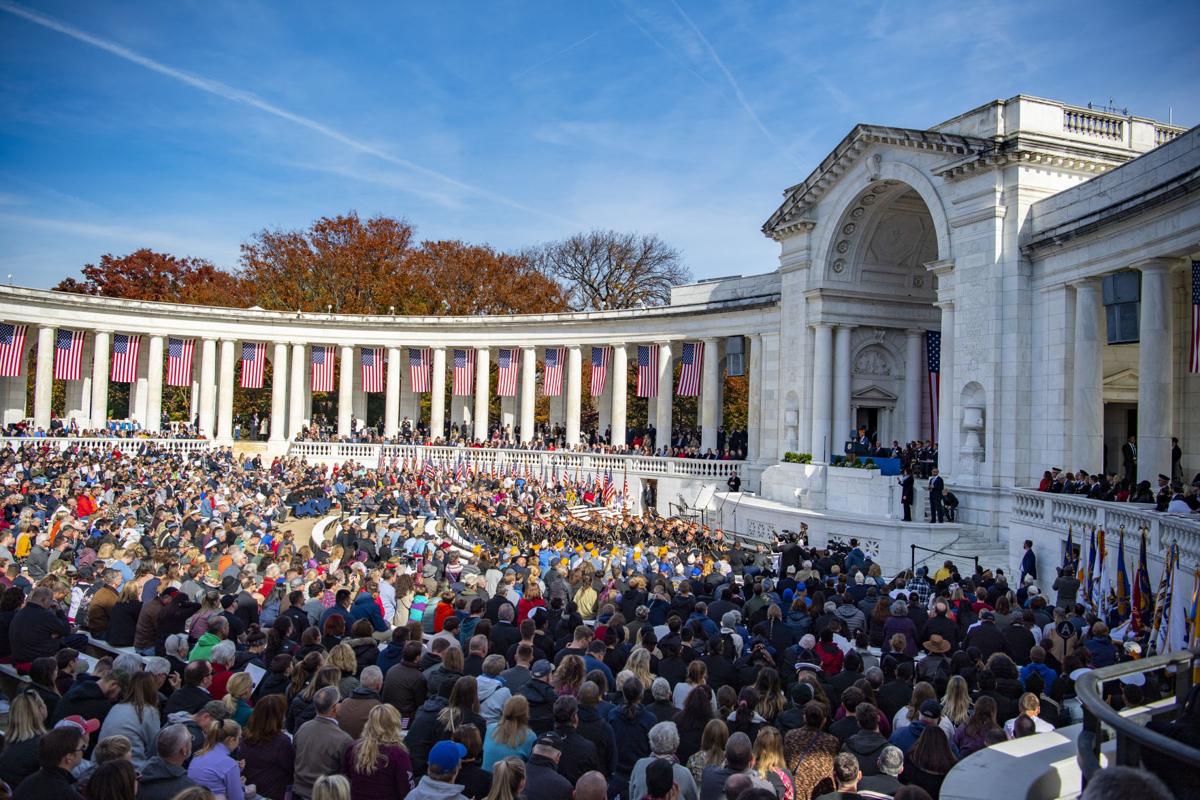 Visitors attend the national Veterans Day observation in the Memorial Amphitheater at Arlington National Cemetery last Nov. 11. Vice President Mike Pence with Secretary of Veterans Affairs Robert Wilkie participated in a wreath-laying ceremony at the Tomb of the Unknown Soldier and spoke to the crowd. 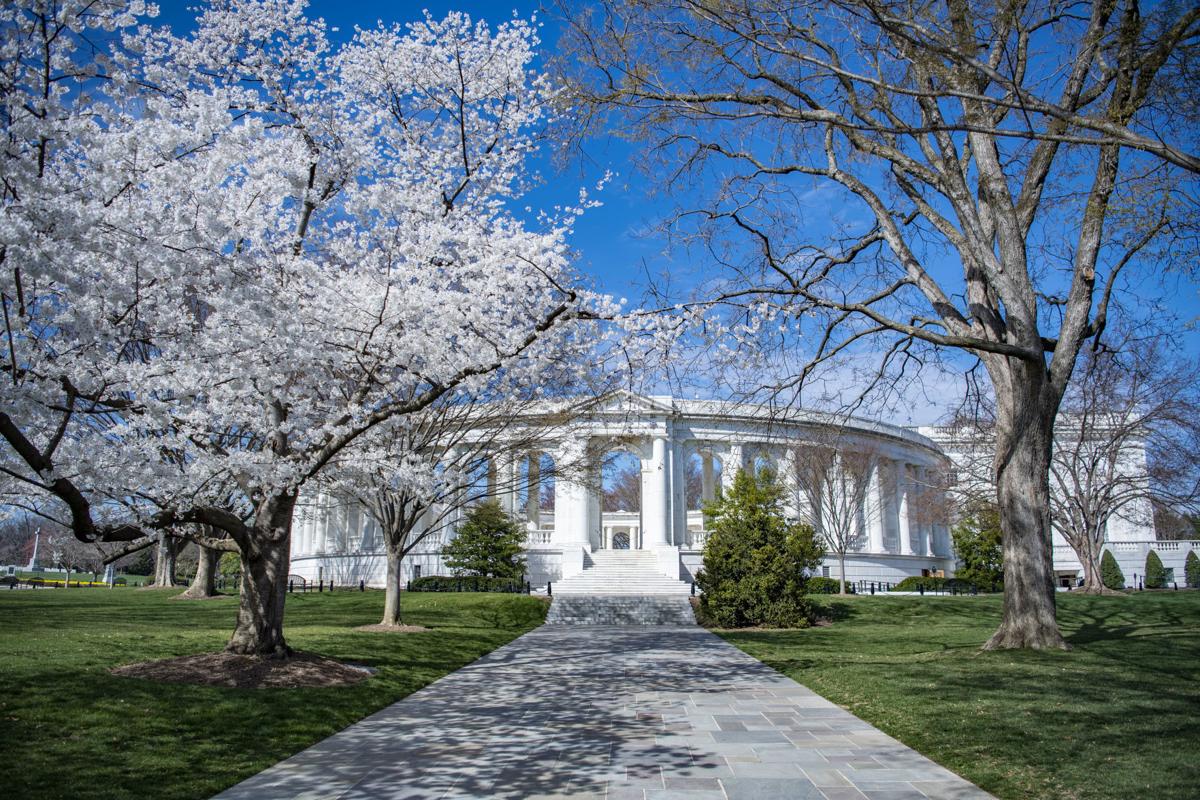 The Memorial Amphitheater is the centerpiece of Arlington National Cemetery. 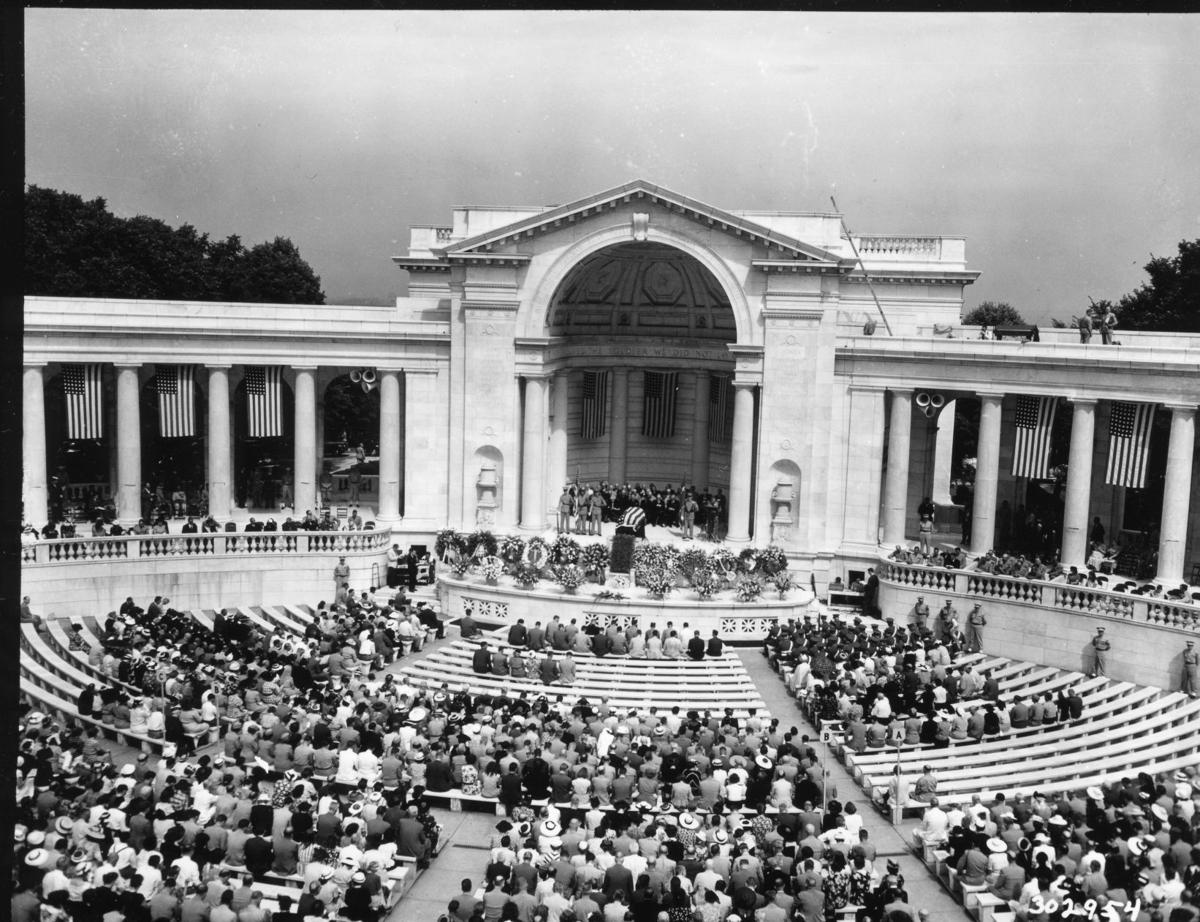 Here’s a scene from the 1948 funeral of Gen. John J. Pershing at held at the Arlington National Cemetery Memorial Amphitheater. 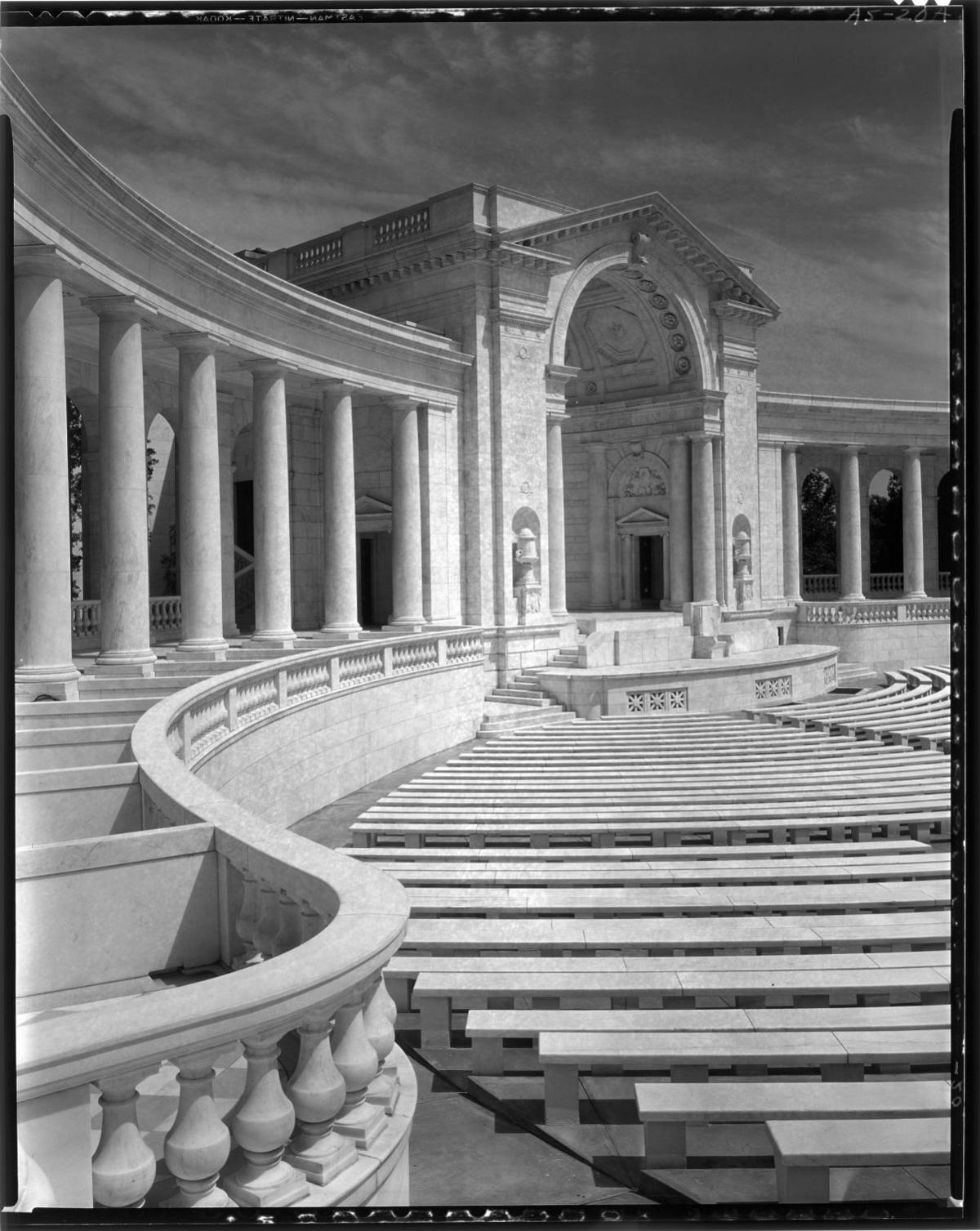 Here is the amphitheater in May 1920.

Visitors attend the national Veterans Day observation in the Memorial Amphitheater at Arlington National Cemetery last Nov. 11. Vice President Mike Pence with Secretary of Veterans Affairs Robert Wilkie participated in a wreath-laying ceremony at the Tomb of the Unknown Soldier and spoke to the crowd.

The Memorial Amphitheater is the centerpiece of Arlington National Cemetery.

Here’s a scene from the 1948 funeral of Gen. John J. Pershing at held at the Arlington National Cemetery Memorial Amphitheater.

Here is the amphitheater in May 1920.

Arlington National Cemetery has been the site of countless ceremonies honoring the nation’s veterans and fallen heroes.

The words of every U.S. president since Warren G. Harding have echoed off its stately columns. It’s been a place of praise on Easter Sunday mornings and hosted funerals for some of the country’s most notable figures.

Originally created as a way to honor those who fought and died in America’s early wars, Arlington National Cemetery’s (ANC) Memorial Amphitheater has been a part of events paying tribute to those who have fallen in service to the nation in the years since its dedication on May 15, 1920.

In recognition of the landmark’s 100th anniversary, ANC historian Timothy Frank and Rebecca Stevens, ANC Cultural Resources Manager, shared some background on the amphitheater’s origins, stories on the famous events held there and hidden secrets of the structure.

When did the idea develop for creating the amphitheater?

Frank: The amphitheater idea really starts with the Civil War. The Cemetery was established in 1864. Back in those years it was not really considered an honor to be buried in a national cemetery. Usually, if you were buried in a national cemetery it indicated that your family couldn’t afford to have your remains returned home. It was pretty expensive to embalm and transport remains in those days.

All that changed in 1868 when Civil War veteran Gen. John Logan, a founder of the Grand Army of the Republic (GAR), a veterans group comprised of former Union Army soldiers, established Decoration Day. The first Decoration Day was held at ANC in 1868 and over the following years thousands of people would show up each May 30 to place flowers on the graves of Civil War fallen.

In 1873, they realized they needed a venue to start off the day and so built the smaller James R. Tanner Amphitheater near the Tomb of the Civil War Unknowns. Every year the crowds grew. In 1903 Judge Ivory Kimball, another leader of the GAR, persuaded the Secretary of War that an even bigger venue was needed to host the Decoration Day ceremonies. We credit Ivory Kimball with the push for the grander amphitheater.

Stevens: The Arlington Memorial Amphitheater Commission was formed in 1908 to oversee construction; however federal legislation authorizing construction was not passed until 1913. Arlington National Cemetery finally broke ground for the building on March 1, 1915. Once started, it took five years to build the Memorial Amphitheater. Poor weather, supply issues, and war interceded to delay construction, postponing completion to 1920.

Frank: It was dedicated in 1920 and was seen as being the centerpiece of future Decoration Day ceremonies. It was only years later with the establishment of Armistice Day, now Veterans’ Day, that it became the center point for Veterans’ Day and Memorial Day activities. Memorial Day was established in 1968 to be held on the last Monday in May.

Is there special significance to its architectural design?

Stevens: The Memorial Amphitheater was designed by Thomas Hastings, of the renowned architectural firm Carrère & Hastings. They are the same firm that design the New York Public Library. Hastings’ design is a masterwork of the Beaux-Arts approach to architecture; the classical-revival style for public and private buildings at the turn of the last century. In Hastings words, he intended the building to be “very classic in character and at the same time in the spirit of the early colonial architecture of this country, making it appropriate for this place and purpose.”

What were the first events held at the amphitheater?

Frank: The first event was the Dedication Program on May 15, 1920. Speakers included then Secretary of War Newton D. Baker, Gen. John J. Pershing, William Jones, commander of United Spanish War Veterans and Grand Army of the Republic Commander Dan M. Hall. An address by the President is listed on the program which I found at the Library of Congress. But we think President Wilson wasn’t able to attend due to his stroke. Following the dedication, the first Decoration Day ceremony was held there later that month on May 30.

What are some of the most memorable events held at the amphitheater through the past 100 years?

Frank: One of the most notable was the funeral of Charles Young in 1923. He was the first African-American colonel in the U.S. Army. His funeral has been one of few to be held at the Memorial Amphitheater. Though ANC was segregated at that time, Col. Young was buried with white officers in Section 3.

Gen. Pershing’s funeral on July 19, 1948 drew thousands of mourners. Before the service they took the caisson holding his casket onto the plaza of the Tomb of the Unknown Soldier and paused there. (General Pershing is buried at Arlington National Cemetery in Section 34, Grave S-19 (ANC)).

Services for the 5 American flyers shot down over Yugoslavia in August 1946 by Marshal Tito’s forces were held in the chapel built under the amphitheater. They brought five caskets into the chapel and then buried the fliers in a common grave in Section 2 of Arlington National Cemetery.

Cpl. Frank Buckles, the last living World War l veteran lay in honor in the amphitheater in March 2011, following his death that February at the age of 110.

In 2018 there was a tribute to Robert F. Kennedy on the 50th anniversary of his assassination at the amphitheater.

How was the Tomb of the Unknown Soldier added to the amphitheater?

Frank: The amphitheater was being built before World War l, through the push from Civil War and later Spanish-American War veterans. So this is a memorial to the sacrifice of generations of Americans from the War for Independence to the Spanish-American War. In 1920 the British and the French interred their unknown soldiers from WW l in memorials. The American people read about these grand ceremonies in London and Paris and they started writing to the war department and to Congress requesting that we do the same, following the British and French example. Congress passed legislation to select, honor and inter the unknown at Arlington National Cemetery. In November 1921, an unknown soldier was buried in a memorial on the plaza at the east side of the amphitheater. In 1932, they completed the larger tomb that is there today.

While the amphitheater stops at the Spanish-American War, to me the Tomb of the Unknown Soldier bridges the past and the present, so this is a living memorial to the fallen.

Are there hidden secrets to the Amphitheater?

Frank: People might not know that they built crypts under the colonnades where distinguished Soldiers, Sailors and Marines could be buried. That kind of went by the wayside when Gen. Pershing went out into the cemetery and selected where he wanted to be buried. He surveyed the cemetery and he wanted to be buried overlooking the men he led in WW l, so he is buried on a hilltop above the WW l section. There is a lot of correspondence in the National Archives between the Quartermaster of the Army and the cemetery superintendent which discuss ‘if we disinter Gen. Pershing and place him in the crypts, we’re going against his wishes.’ We surmised from those letters they decided not bury anyone in the crypts in the future.

Another part of cemetery lore is that the Tomb guards live in those crypts. I talked with a former Tomb guard who was there in the early 1970s and he said that back then the guards lived in the catacombs. But the guards don’t live in the catacombs now and they don’t use them for preparing their uniforms. They have a special area more recently built into the Amphitheater.

People often ask me if I’m afraid to work in a cemetery because of ghosts. My response is always the same. Throughout my career I’ve interviewed more than 300 veterans; many of them are now buried in ANC. The way I look at it is that I’m surrounded by friends and I’m still telling their stories.