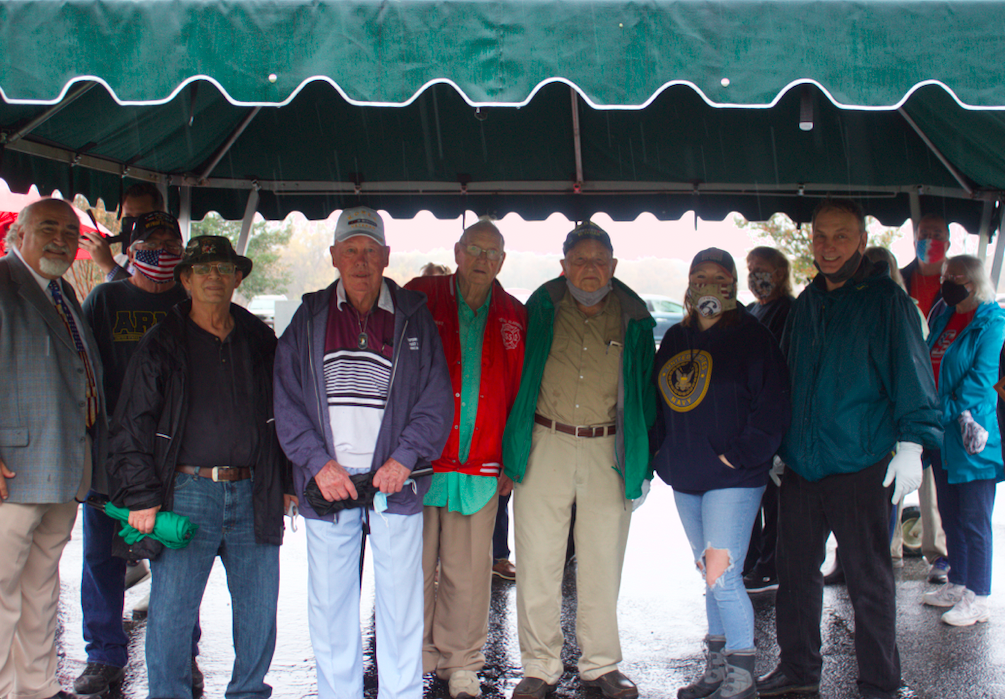 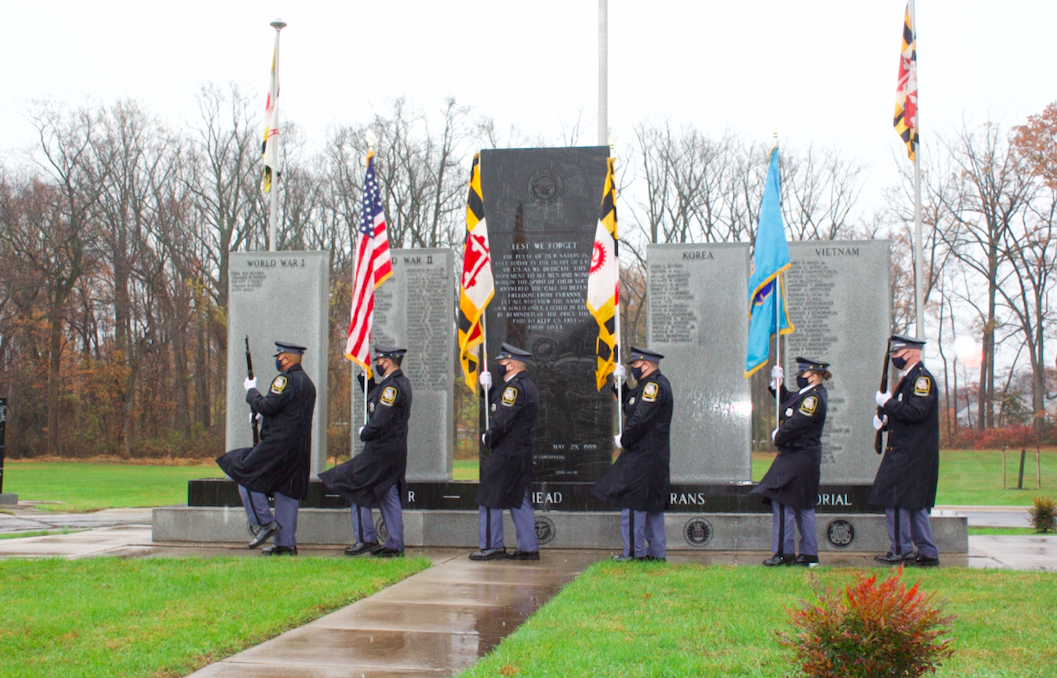 MIDDLE RIVER— Despite the rain and gloomy weather, the feeling of pride and camaraderie was strong amongst the people who attended the annual Veterans Day ceremony at Holly Hill Memorial Gardens last week—especially when World War Two Veteran Bud Gahs lead everyone in the Pledge of Allegiance at the beginning of the event.

“Today, I remember all the soldiers I was with and all the people who were killed. When you see your first person being killed who was running along side of you it’s rough,” Gahs said after finishing the Pledge.

Although Gahs witnessed some horrifying scenes and lived through dark and challenging times while fighting overseas, he was able to stay positive by relying on his faith.

“I’ve been a Christian all my life. I can look back and see so many times that the Lord was with me. Oddly enough, it’s in timing in how things happened. If I had been here instead of here 5 minutes ago I would have been killed. God [was] working, he was working in timing.”

Gahs, along with other veterans who spoke at the ceremony, talked about the importance of honoring Gold Star Families, families who had lost a family member in combat.

“These families are not honored enough. I think we ought to put a monument up for the families here at Holly Hill,” Delmar Dickson, a Korean veteran said as the crowd nodded in agreement.

Another vet to speak at the ceremony was Courtney Lancaster-Sperry, a third generation Navy veteran who served in Guantanamo Bay.

I am incredibly humbled just to be standing with all of you,” Lancster-Sperry said to her fellow veterans. My greatest honor is to just carry on this legacy of my family.

Lancaster-Sperry’s grandfather and his twin brother served on the USS Ghez in Wold War Two which was hit by a Japanese Kamikaze. Luckily they survived and Lancaster-Sperry said they both went on to live a full lives.

Lancaster-Sperry’s father followed in her grandfather’s footsteps and served in Vietnam and then her and her brother both joined they Navy.

“We were in bootcamp at the same time. We were in separate divisions but what brought us together was Sunday chapel. That’s the only time we could see each other. We were able to whisper, we did listen to the word of God I will say, but we were able to whisper about Mom, our life and our time. As soon as [bootcamp] was done 9/11 was upon us before we even knew what was going on.”

Lancaster-Sperry went on to say one of her biggest honors, in addition to carrying on her family legacy, was when she served in the Honor Guard at President Regan’s funeral.

“That was an incredible honor for myself and I bring my kids out here and make sure they remember. I feel like as times have gotten tough in our generation...I want to make sure our kids understand the importance of [ Veterans Day].

In addition to honoring veterans like Gahs and Lancaster-Sperry at the ceremony, this year’s service was dedicated to Keith Roberts, who was an Air Force Veteran who recently passed away. Roberts’ name has now been added to the “Honorably Served” wall at the Veterans memorial at the memorial gardens.

Delegate Ric Metzgar, who ran the ceremony, said Roberts decided to donate his body to be used in Diabetes research, a condition that he had and that he hoped would one day have a cure.

Anyone can visit Holly Hill Memorial Garden’s veterans memorial to pay their respects to the veterans we have lost in our community any day of the week.