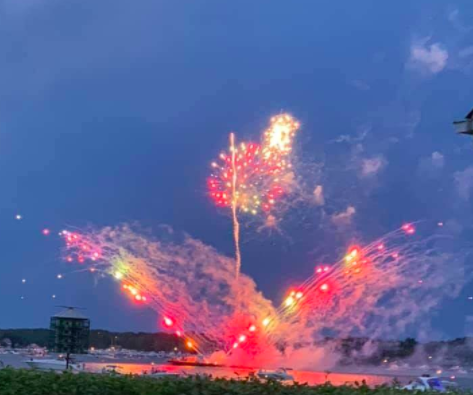 MIDDLE RIVER— The Marine Trades Association of Baltimore County (MTABC) has been providing fire works for over 20 years—and they will continue the tradition this year despite the obstacles the association has faced due to COVID-19.

“We wanted to give everybody who is suffering right now something to look forward to,” Brian Schneider President of MTABC said.

Typically, MTABC has been able to fund the fireworks show through donations. This year, however, Schneider said MTABC has used their own funds to ensure the community gets a firework show.

Schneider said initially MTABC was not given a fire permit to have the fireworks but thanks to local politicians, the show is a go.

“We want to say a bing thank you to Johnny O, Cathy Bevins, Todd Crandell, Bob Long, J. B. Jennings, Lauren Faller and Gabbie Slocum. Everybody saw the need for the community and everybody got together to make it happen,” Schneider said.

“We also want to thank Kyle Fennel and Rob Cooper (The Dock Guy) for lending us the barges because without the barges this show can’t happen.”

Schneider said the fireworks will be launched from Long Point around 9:15 p.m. on July 4 and that MTABC made sure the show would be one to remember.

“We are going to have a really fantastic show. We asked our shooter what will it take to really wow everybody so we had to drastically increase our budget,” Schneider said.

“There will be years of fund raising to try to get our money back but because of what’s going on the board said we have to do them.”

To make a donation to MTABC’s firework show visit www.mtabc.org/your-support-is-needed-for-the-2020-fireworks-show.

According to the Baltimore County Fire Department, fireworks burn up to 1,800 degrees fahrenheit and can cause burns, lacerations, amputations and blindness. These potential hazards and harmful effects is why the fire department says fireworks should only be handled by professionals who are shooting off fire works as part of public display that the State Fire Marshal has granted a permit for.

Backyard Fireworks Are Illegal in Maryland

According to the Baltimore County Fire Department, people cannot have a private display of fireworks at their homes without a permit. All fireworks displays, regardless of location, require the proper permits and insurance. Pople can call Baltimore County’s Fire Marshal’s Office at 410-887-4880 for information.

A list of legal, public displays in Baltimore County is available online. The State Fire Marshal posts a list of all approved fireworks displays in Maryland.

The sale of fireworks is legal in neighboring states, including Pennsylvania. However, it is illegal to purchase fireworks in other states and ignite them in Maryland.

Some Ground-Based Sparklers Are Legal in Baltimore County

In Baltimore County and most other Maryland counties, it is legal for consumers to purchase and use some hand-held and ground-based sparkler devices.

Consumer use of fireworks and sparklers is illegal in Baltimore City, Harford, Howard, Montgomery and Prince George’s counties, and in Ocean City. Contact the Maryland Office of the State Fire Marshal for details.

Under Maryland law, the following are not classified as fireworks and are legal for backyard use in Baltimore County:

Toy pistols, toy canes, toy guns and other devices that use paper caps if the devices are constructed so that a hand cannot touch the cap when the cap is in place for use.

Hand-held sparklers that do not contain chlorates or perchlorates (use “gold label” only).

Ground-based sparkling devices that are non-aerial and non-explosive. Legal ground-based sparklers are stationary, sit on the ground and emit a shower of sparks several feet into the air. Some may whistle, but they do not pop or crack. They do not explode, shoot projectiles or move along the ground.

Paper-wrapped snappers that contain less than .03 grains of explosive composition.

Any hand-held or ground-based device that creates an explosion, detonation, loud noise, that launches a projectile or moves along the ground under its own power is illegal in Baltimore County and elsewhere.

Examples of prohibited items include:

Roman Candles and bottle rockets (whistling or with report);

Any firework shot from a mortar tube.

The County Fire Department and the Maryland State Fire Marshal offer these guidelines for safe, legal use of hand-held and ground-based sparklers:

Hand-held sparklers are legal only if their packaging states that they do not contain chlorates or perchlorates.

Do not allow children to handle ground-based or hand-held sparklers. The temperature of a sparkler can reach 1,800 degrees Fahrenheit.

When handling sparklers, do not wear loose clothing.

Keep one or more buckets of water on hand and submerge spent sparklers in the water.

You must be at least 16 years old to purchase hand-held and ground-based sparklers.

For complete information about state fireworks regulations and the safe use of fireworks and ground-based sparklers, visit the State Fire Marshal website at www. mdsp.maryland.gov/firemarshal.