You are the owner of this article.
Edit Article Add New Article
Home
News
Sports
Opinion
Relaxer
Obituaries
Local Folks
On Health
Through the Years
Classifieds
Calendar
Local Ads
1 of 4 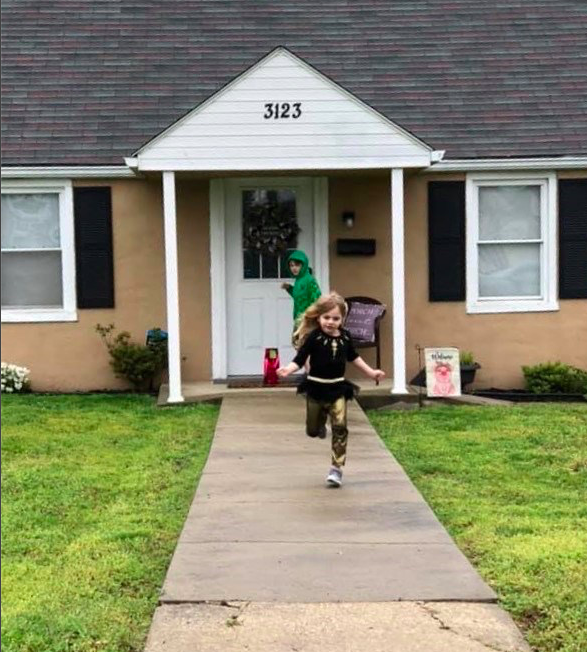 Brittany Ermer’s “helper fairies,” Joshua and Kayleigh Smith, often go with her when she delivers gifts on people’s doorsteps. 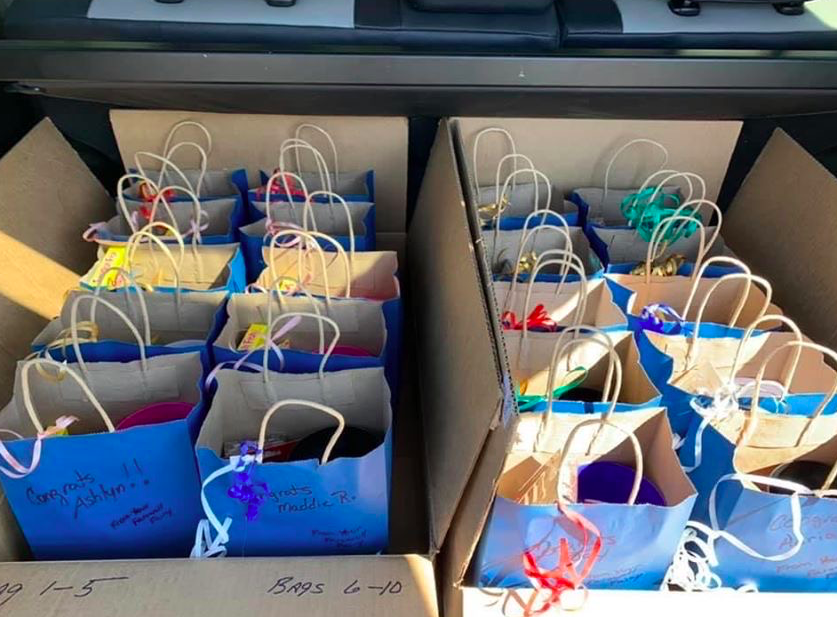 A vehicle loaded with gift bags is ready to deliver a sprinkle of happiness to unsuspecting people. 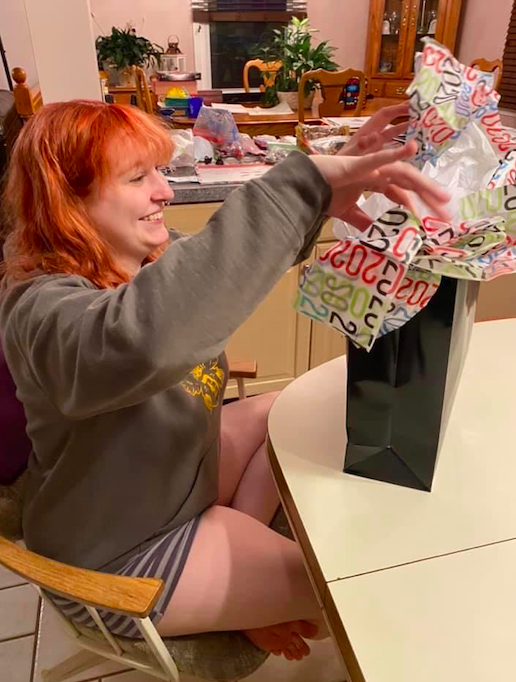 Teresa Pouncy, who will soon graduate from Dundalk High School, dives into the graduation gift bag that was left on her doorstep. 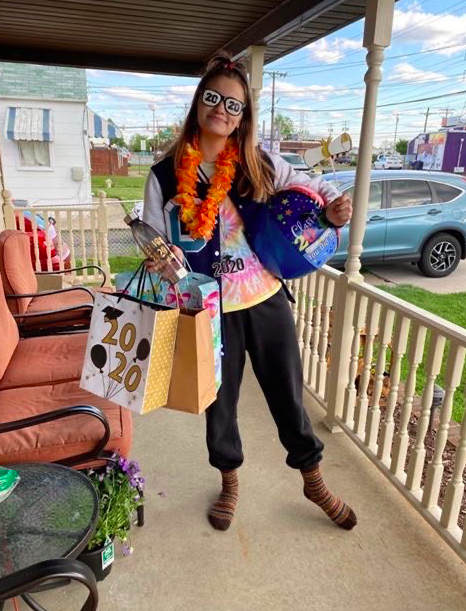 Chesapeake High School Raquel Ziolkowski, the younger sister of Victoria Ziolkowski, shows off the swag that was gifted to her by a complete stranger.

Brittany Ermer’s “helper fairies,” Joshua and Kayleigh Smith, often go with her when she delivers gifts on people’s doorsteps.

A vehicle loaded with gift bags is ready to deliver a sprinkle of happiness to unsuspecting people.

Teresa Pouncy, who will soon graduate from Dundalk High School, dives into the graduation gift bag that was left on her doorstep.

Chesapeake High School Raquel Ziolkowski, the younger sister of Victoria Ziolkowski, shows off the swag that was gifted to her by a complete stranger.

BALTIMORE COUNTY — Literature provides us with tales of fairies who leave gifts for those in need, unbeknownst to the beneficiary.

In Essex, Middle River, White Marsh and other towns throughout eastern Baltimore County, a similar form of gift giving is happening. “Fairies,” as they call themselves, are using their own time, money and gas to bring small gifts and smiles to strangers.

The gifts include things such as wine, spirits, snacks, coffee and other goodies that will bring a little happiness to residents while they remain under social distancing orders. People spend most of their time at home, and the luxury of freely going out and buying these items without worry is not present.

“I’ve delivered coffee, snacks, alcohol and things for kids,” said Brittany Ermer, an Edgemere resident who has made and continues to make deliveries to people around southeastern Baltimore County. “When I do mine, I usually go through and pick out people who either have been out gifting other people. They will post a picture saying that they are out.”

“I try to pick a couple of people from each group when I go out. We’ll usually do anywhere from 6-10 at a time.”

Ermer said she was invited by a friend to one of the groups one day. From there, she began making deliveries to people in her local area. She currently sticks to Dundalk, Edgemere and Essex, she said, but might consider branching out to other places in Baltimore County.

“I love it,” Ermer said about being a gift fairy. “Sometimes we get caught, and it’s fun to see when people go to the door, or if they are out front in their yard and they see us.”

“Kids really get excited. They come running over and they see the gift bag. Seeing them smile is what is really nice. In the groups, people post pictures later.”

Sisterhood of the Traveling Spirits

Sierra Hines started a group called Sisterhood of the Traveling Spirits as a way for people to connect during the pandemic. “SHOTS,” as it is known by its acronym, began as a nationwide group, and that nationwide group is still active. More groups, labeled by state, have spawned from the main group.

“It quickly grew and myself and my [administrators] couldn’t keep up with posts and member requests,” Hines said. “Now, we have one for the entire state of Maryland. Many of my followers have started their own chapters in their respective states.”

Hines said that even people in the UK have started their own chapters, as well. “Sisterhood of the Traveling Spirits — MD,” as the Maryland chapter is called, is split up by city. Residents in their respective cities can leave their addresses and request a “sprinkle,” which is what group members call deliveries.

“Fairies can choose which area they deliver to,” Hines said. “I have done my hometown and two other cities near me.”

“I’ve seen a lot of members using a number generator in order to pick from thousands of members. They pick however many people they want to sprinkle, and basically play an adult version of ‘ding dong ditch.’”

Browsing the SHOTS — MD group, one can see posts from several “spirit fairies” asking for addresses. Others will post pictures of their sprinkles and thank the anonymous people who leave the gifts on their doorsteps. The people delivering gifts use their own resources, but Hines said that businesses have begun offering discounts to those who make the purchases and then the deliveries.

“Words cannot describe this feeling,” Hines said. “The positivity, cheer, smiles, giving, caring, thoughtfulness and every other describing word that could turn your soul to mush. It’s overwhelming.”

“I’ve been incredibly impressed with humanity, especially in the face of a pandemic. I understand that these businesses have to run as normal to survive, but they’ve been so generous and kind.”

Recently, Maryland Superintendent of Schools Karen B. Salmon declared that all Maryland public schools will remain closed for the rest of the academic year, and graduation ceremonies are canceled. Stories of disappointed seniors, looking forward to celebrating a milestone achievement that was abruptly taken away, began circulating.

Since then, another Facebook™ group called “Farewell Fairies” has been started. The group is solely for the purpose of delivering gifts to graduating seniors. One of the announcements in the group encourages members to bring “happiness, love and positivity” to graduating seniors by leaving them balloons, flowers, snacks and positive messages.

Dundalk resident and Zallies Boutique owner Tiffany Lockemy said she will begin delivering graduation gifts next week. She has been a fairy for the past two weeks, delivering wine, snacks and things for kids over that time.

The Farewell Fairies group was started by Victoria Ziolkowski. She said her inspiration to create the group was a combination of seeing how her sister, Raquel Ziolkowski, had reacted to the news that proms and in-person graduation ceremonies were canceled, and from a Facebook™ group called “Sisterhood of the Traveling Wine.”

“I saw that generous people were delivering wine along with other goodies to friends and complete strangers to cheer them up during this unprecedented time,” Ziolkowski said. “I thought about what I could do to cheer her up, and then I thought I thought of this wonderful idea.”

Ziolkowski said that her sister didn’t take the news well, and that it’s a lot more than just prom and graduation. “They have a senior farewell ceremony, an awards ceremony, a senior picnic and so many activities that these seniors are missing out on in their final farewell,” she said.

“This is supposed to be a really happy time for them.”

Ziolkowski, who is a lifelong Dundalk resident, said the group was present in Dundalk and Essex when it began. It has since expanded to White Marsh, Middle River, Parkville and to places in Hartford County. The group grew to more than 700 members in under a week, she said.

“It’s probably growing by 100-200 people per day,” Ziolkowski said. “It took off exponentially.”

“It just ranges, and the smiles on these seniors’ faces from whatever they receive say they are all very grateful for the acts of kindness that are being delivered to them,” Ziolkowski said.