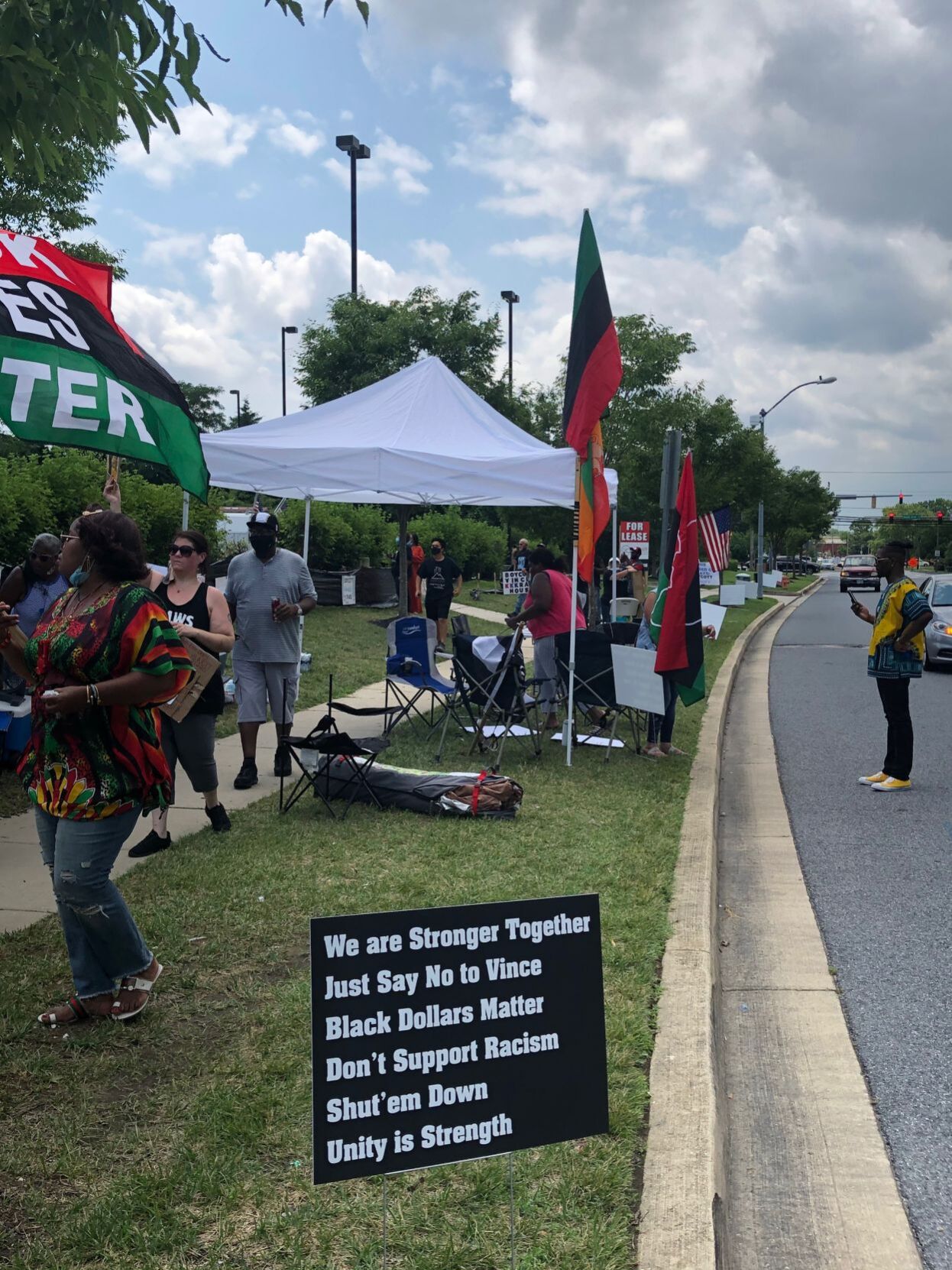 Protestors outside of Vince’s Crab House 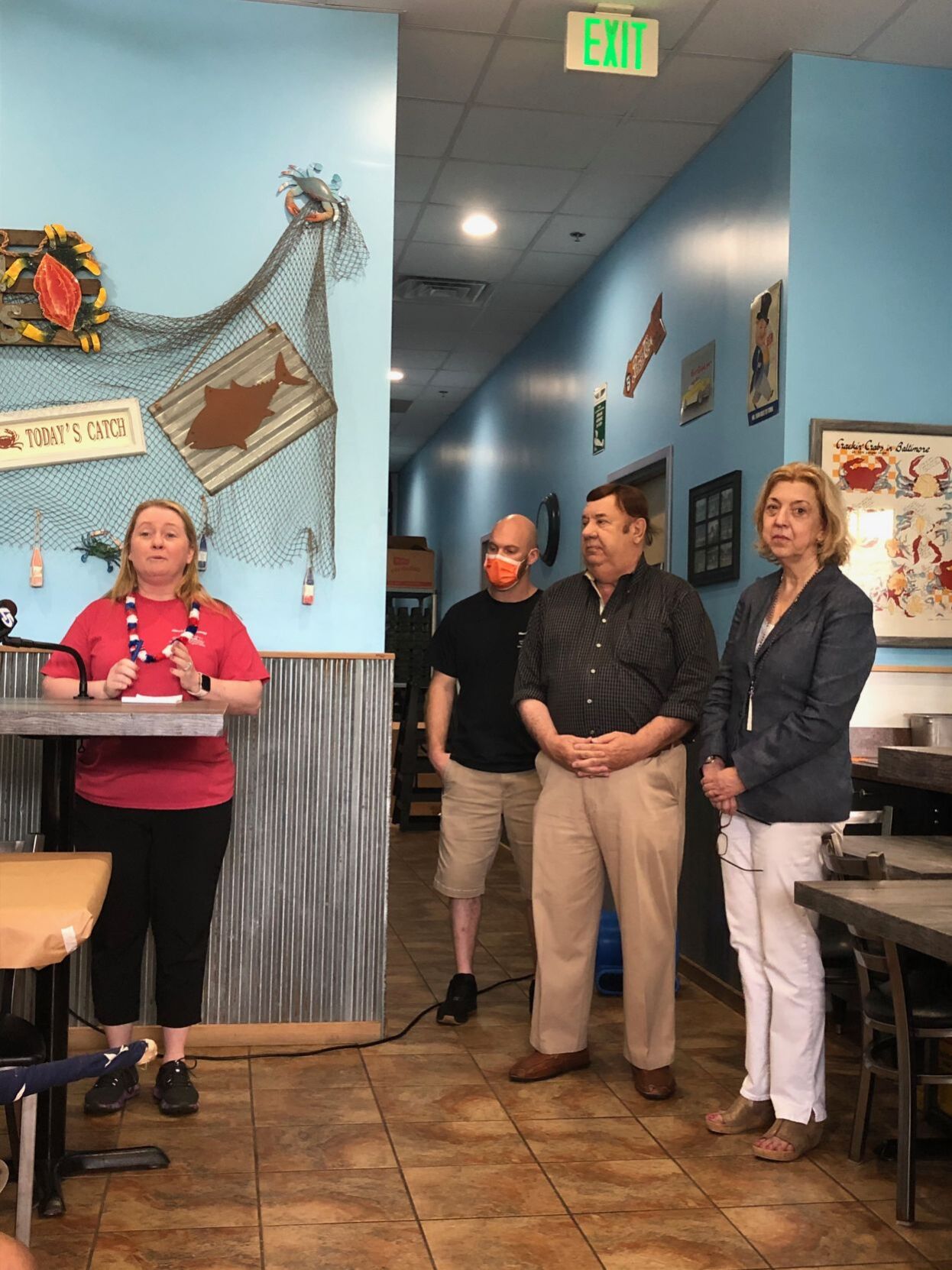 Protestors outside of Vince’s Crab House

The owners of Vince’s Crab House have filed a lawsuit against the protesters that have assembled in front of the Middle River establishment for nearly two months.

The announcement was made last Saturday during a flag rally inside the restaurant. Pat McDonough, a former state delegate who now hosts a conservative talk show on WCBM AM 680 in Baltimore, made the announcement to a small crowd of supporters during the rally. McDonough, who had no association with the owners before the protest at their restaurant, began to support the Meyer family by holding press conferences and aiding in their legal battle against the county. ,

“I will start this off by saying to you, welcome to the headquarters of the Ku Klux Klan,” McDonough said at the beginning of his speech. “That is what those people out front would like for you to believe, and for the general public to believe.”

“The fact of the matter is, this is an American small business that was started 15 years ago by a young family and it has been a great success.”

“Those people” that McDonough referred to are protesters that belong to the Shut Down Vince’s Crab house Organization. Organized by nearby resident Kellie Vaughan, the group has been demonstrating in front of the Middle River location for more than 50 days. The protest began when Vince Meyer, the son of owner Brenda Meyer, had some controversial remarks made on social media come to light.

One of those remarks came in the form of a personal Facebook post. “There is one place I bet protesters/rioters won’t light on fire or break into or even block the road to… the social services building,” the post said, followed by four laughing emojis.

The post was made around the same time protests for racial equality and against police brutality, particularly against Blacks, began springing up around the country. It began when a Black man named George Floyd died while in police custody. Floyd was seen on video lying on the ground while detained, while three Minneapolis police officers were on top of him. One of those former police officers, Derek Chauvin, applied pressure with his knee to Floyd’s neck for nearly nine minutes.

Floyd’s death occurred on May 25, and this particular post was made on June 1. Vaughan said she did not see the post until June 6, the same day the protests in front of Vince’s Crab House began.

Nearly two months later, and the saga between the owners of Vince’s Crab House and the protesters drags on. Vaughan told The Avenue News this week that her organization wants to see Vince’s Crab House removed from the community. She said she is aware the family owns similar establishments elsewhere, but her concern is the Middle River establishment.

“They can set up shop elsewhere. Free enterprise, free country,” Vaughan said. “But for all of the damage they have done to the Middle River community, I feel like now they need to go.”

“It’s not just based off his Facebook posts. It’s based off of truly racist actions and just being nasty to their own community. If 75 percent of your revenue comes from the Black community and you turn your back like this on them, then you need to go. That’s the house that we built with our money.”

Vaughan said during a press conference last month that the Middle River location is her favorite location, and seeing the post truly angered her. She felt hurt and betrayed by a business establishment she supported on a weekly basis, she said.

“For me, it was disrespectful to the African-American community,” Vaughan said.

Vince Meyer later published a video issuing an apology. In the video, he said that he is not a racist, mentioning a Black best friend and naming off his associations within the Black community. Meyer also said in the video that 75 percent of his Middle River customers are Black, adding that he “could apologize,” but it probably wouldn’t make a difference or the apology wouldn’t be accepted by the community.

The Meyer family agreed to shut down the Middle River location for nine days. When they reopened, the plan was to negotiate a plan towards making amends. Instead, the situation has gone in the opposite direction. During a June 1 press conference, Vince Meyer said the family started a GoFundMe to make up for lost revenue during the nine-day shutdown. He told a different story on his personal Snapchat account, however.

A screenshot of the snap was given to this newspaper. “They think they can stop me from doing business, so I put up a GoFundMe just to p*** them off lol,” the snap said. Vaughan said she personally verified with Meyer that the account belonged to him. As of July 28, $1,987 of the fundraiser’s $500,000 goal has been raised.

Last month, the owners of Vince’s Crab House filed a lawsuit against Baltimore County Executive John Olszewski, Jr. and Baltimore County Police Chief Melissa Hyatt, alleging that the police and the county have not done enough to protect the establishment from the demonstrators. The lawsuit against Vaughan and her organization was filed this week. On July 31, McDonough will hold another press conference at the restaurant, where he will announce a federal complaint because there was not a police presence at the July 25 rally. Police officers were seen at the rally that day.

The scene in front of Vince’s Crab House that Saturday resembled the protest that first occurred on June 6, only with more supporters of the restaurant. Driving vehicles decorated with American flags, Gadsden flags and President Donald J. Trump 2020 campaign flags could be seen parked in front of the building. Across from the building on the sidewalk, members of the community angered by the situation continued their protest.

“We had a group of people organize a flag-waving rally, just to show support and kind of bring the community together,” Vince Meyer told this newspaper on July 25. “[They are showing support] for the community. I feel like they think this is more of a community battle versus a white or black, or any kind of racial battle.”

“I think it’s turned into a group of people versus Vince’s CrabHouse, and it’s kind of disrupted the community.”

Vince Meyer said it’s been “aggravating” to have protesters in front of the restaurant every day, but he and his family have been able to navigate through it. “The business is going well, and this hasn’t affected things, for sure,” Meyer said.

Vince Meyer said he and his family have issued several apologies for the upsetting comments and have tried to make things right, adding that people in the community have accepted his apology. Those community members have trickled in to have a conversation with the Meyer family, he said.

“The coin is flipping now, and we’re trying to get back to business as usual,” Vince Meyer said. “If anyone wants to have a conversation, we’re open ears.”

Brenda Meyer said that members of Baltimore County Fire Department — Station 12 have complained about protesters trespassing on the property. A shift supervisor with Station 12 said he is not aware of any such incident, but it could have happened during a different shift. The Avenue News was unable to verify this claim before this newspaper went to press.

Brenda Meyer said that customers have called her on the phone to lend uplifting messages and show their support, and some customers have even entered the restaurant to donate money that will go toward the establishment’s attorney fees.

“We have had phone calls from men that will no longer allow their wives and children to go down Compass Road,” Brenda Meyer said at the rally. “They have to go another way because they fear for their wives’ and children’s protection.”

“People are no longer able to walk on the sidewalk. They are walking through the parking lot to go around the protesters.”

Brenda Meyer alleged that people are harassed by protesters when they try to enter the establishment. Vaughan said that protesters are not harassing people who wish to give their money to Vince’ Crabhouse. Instead, they ask questions to the potential customers.

“Do you know what kind of establishment you’re getting ready to support,” Vaughan said, describing what is said to people. “Plain and simple. That’s not harassment.”

Vaughan said that the Meyer family and their supporters have made other baseless claims. McDonough said during the rally that the protesters are each being paid $20 per hour to be there. McDonough said that this is an allegation, but did not give the source of the allegation. Vaughan, who said she owns several businesses and owns more than one home, said claims have been made about her that she is unemployed and collecting welfare.

Other allegations have been made, according to Vaughan. One is that protesters have followed restaurant workers to their homes after their shifts. Vaughan said her organization does not do this.

Vaughan gave this newspaper a timeline of all the events that have transcended since this saga began. Along with that timeline, Vaughan included several images and videos depicting negative behavior from family members and their supporters.

One image shows Brenda Meyer sticking up her middle finger to protesters. Another is a video of one supporter, a Black man named Stephen Copeland, who said that if a protester so much as said “hello” to him, then he would “blow their head off.” This video was taken from his personal Facebook page.

Another video shows Vince Meyer admitting to spraying a protester in the eye with a water hose. In the video, Meyer said in the video it was done in retaliation for someone slapping his sister. In the same video, protesters made claims that they were sprayed by the restaurant’s outdoor sprinkler system.

Another allegation made is that he is trying to shut down that location because he wants to open his own crab house at a nearby location. Vaughn said he has no desire to go into the seafood business.

“When you’ve been in business as long as I have, you kind of hear it all,” Vaughn said. “Pretty much everyone that knows me knows that I am not one that has gone with the status quo of ‘you’re business owner, too, and you shouldn’t do that to another business owner.’”

“I believe right is right and wrong is wrong.”

Vaughn said he has had no prior run-ins with the Meyer family. He has been involved in protests where he said he feels that Black dollars have been disrespected.

“We’ve been protesting around the country,” Vaughn said. “I actually just left Texas where I have stores, as well. We were down there protesting where a young couple was denied service. I’ve always been involved in protests where it seems like our dollars have been treated well, but we have been treated with disrespect.”

The next press conference will be held on July 31 at 10 a.m. inside Vince’s Crab house. McDonough is expected to file a federal complaint on behalf of the Meyer family alleging that no police officers were at the flag rally at Vince’s Crab house on July 25.