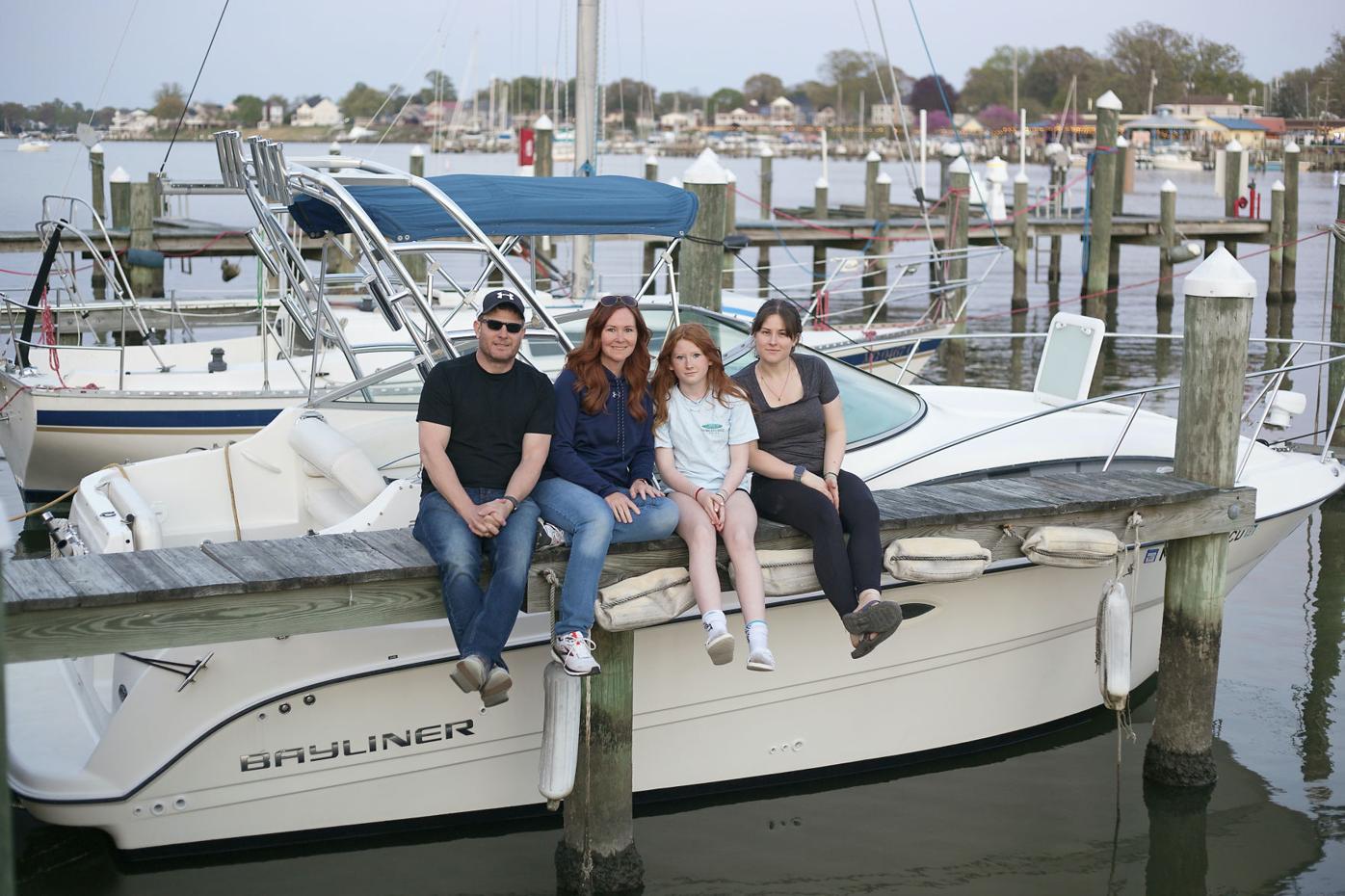 Before the pandemic, Aleana Riddell did not want to buy a boat, but now she and her husband Shawn (left) and daughters Autumn and Summer (right) are avid explorers with their 2010 Bayliner 245. 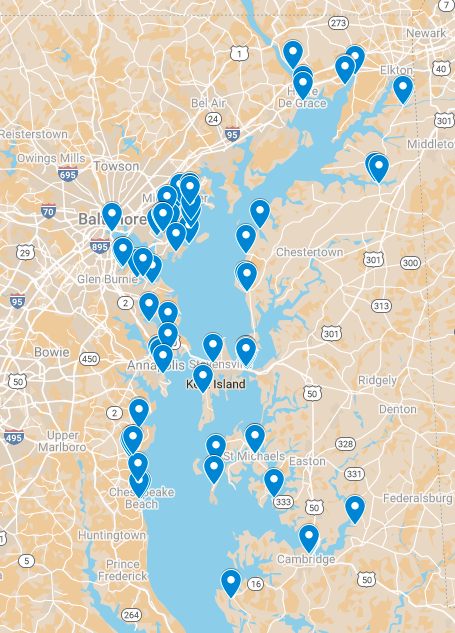 The map includes over 70 restaurants around the Bay, and may get additional layers featuring gas stations and other tools for adventurous boaters.

Before the pandemic, Aleana Riddell did not want to buy a boat, but now she and her husband Shawn (left) and daughters Autumn and Summer (right) are avid explorers with their 2010 Bayliner 245.

The map includes over 70 restaurants around the Bay, and may get additional layers featuring gas stations and other tools for adventurous boaters.

ESSEX — Before the pandemic, Aleana Riddell did not want to buy a boat.

Riddell had just moved with her family from Parkville to a house near the water in Essex. While her husband Shawn really wanted a boat, she insisted that finishing the basement would be a better investment. It would add to the value of their home, for one, and could also be fun — maybe it would include a bar, or a game room. Buying a boat just wasn’t a priority.

“But then COVID hit, everything started to shut down and there wasn’t anything to do,” she recalled. “I was like, ‘I’m not spending my summer in the house.’”

It was hard to find one — turns out, a lot of folks had the same idea — but they eventually settled on a 2010 Bayliner 245 Cruiser that was bought new by the previous owner. They never quite settled on a name, but Shawn is a proponent of ‘Clever Girl’ in a nod to Jurassic Park. They bought the boat last July, and since then have used it to explore the Bay’s shoreline.

That’s what led Riddell, who a year ago didn’t have much interest in boating, to create a map of waterside restaurants all around the Bay.

The map, which you can find online here, includes over 70 dockside restaurants, stretching from Schaefer’s Canal House up in Chesapeake City to Rod ‘N’ Reel Restaurant down in Chesapeake Beach. And the list is growing — Riddell encourages folks to hit her up with more additions.

As a visual person, she explained, she wanted to create a tool of exploration that she could customize for exactly what she needed. But she didn’t go it alone, asking around in some local Facebook groups to get recommendations.

Her method of soliciting recommendations from fellow boaters makes the map unique, she said — it includes spots that might not be on the big ticket lists of dockside restaurants, undiscovered (or at least under-covered) gems, maybe even newer spots that are hoping to ride a wave of business from the swathes of new boaters taking to the Bay.

As the map grows, Riddell hopes it can become a multi-tool for new boaters who want to spend this summer adventuring.

“What’s really neat about this map is you can do layers, and you can turn them on and off,” she said. “There are so many other things I could do with it.”

Here’s where crowdsourcing recommendations comes in handy again, as Riddell can ask folks to pitch new layers they want to see. She’s already had an offer to import a map of fishing spots, as well as suggestions to add parks and recreation areas, or historic landmarks. But her next focus will be gas stations.

“We’re familiar with the gas stations in our area,” she explained. “But if you head down to Annapolis, it would be nice to know that if you come into a situation where you need gas, you know where all the gas stations are.”

To be sure, adventuring around the Bay is not without its perils — Riddell and the family recently attempted a cross-Bay excursion to Jellyfish Joel’s Tiki Bar in Chestertown, but ‘Clever Girl’ broke down not long after they set out. Luckily, they were close to shore — everyone was safe, and it was a quick tow to the shop, but Riddell was disappointed that their first outing of the season was cut short.

Still, she hopes the map will encourage more boaters to get out and about this summer. Maybe as layers are added, the map can become an all-purpose guide to taking your summer road trip on the water. Plus, with restrictions easing around the state, she’s glad to support restaurants — most of which are family-owned — which suffered through the pandemic.

“I really just did this to make life simple for everyone, and for myself in particular,” she said. “I’m glad other people are excited about it.”

Despite demand for boats reaching a 13-year high last year, dockside restaurants didn’t exactly have it easy. Sunset Cove in Middle River, one of Riddell’s local favorites, saw a 50 percent decrease in revenue compared to the previous fiscal year, which was their best since opening in 2012, according to general manager Mike Szymanik.

Even when they could reopen at limited capacity, they never maxed out, and they didn’t see a huge uptick in water traffic — folks may have wanted to get out of the house, but many were still dubious about gathering at restaurants and bars.

“We did whatever we could to keep people here, but it wasn’t enough,” Szymanik said. “The piers were empty.”

Still, they weathered the winter, although Szymanik said he was sick of harping on customers to keep their masks on. And then the tides began to turn — last weekend, Maryland eased restrictions on dining capacity.

“The floodgates opened again, and it felt normal,” he said. “People stuck at home have been waiting to get out.”

It was great to see folks talking to each other at the bar, making new friends and having a good time, he said, and they had over 100 boats in the pier on Saturday. Who knows — maybe some of them found Sunset Cove using Riddell’s map.

Memorial Day weekend is when things usually get really slammed, Szymanik said, so they’re braced for a busy summer.

And they aren’t the only ones — Brewer’s Landing in Essex was also jam packed this past Saturday, and doesn’t expect things to ease up anytime soon.

Manager Jessica Binder said that they were fairly busy last summer, finding some success with having live music that folks could dock and enjoy without leaving their boats. Still, the pandemic definitely took its toll, particularly in the early days when everything completely shut down.

But like Sunset Cove, last weekend’s easing of restrictions changed the game.

“We went from zero to 100,” Binder said. “We were extremely busy all weekend.”

The warming weather doesn’t hurt, and they’ve now got bands booked for Saturdays and Sundays. But more than anything, Binder said, people just want to get out and do something fun, and the eased restrictions were like a green light.

What sets Brewer’s Landing apart? Well, in addition to low prices — including $2 beers on weekdays — Binder says its their welcoming service and family-friendly atmosphere, with plenty of stuff for adults and kids alike.

“Everybody treats each other like family here,” she said. “We definitely welcome everybody.”

And Sunset Cove? Szymanik puts their consistent quality up against any other dockside spot on the Bay, with unique drinks and drool-worthy menu items that will have you wondering what not to order.

While both are braced for a busy summer, they absolutely welcome travelers from across the state and will be happy to give you a little taste of local flavor — and be sure to tell them Riddell’s map sent you.

“It’s a fresh start,” said Szymanik, looking ahead to what he called a ‘rebuilding process.’ “A full 180? We haven’t seen that yet — but it’s only May.”