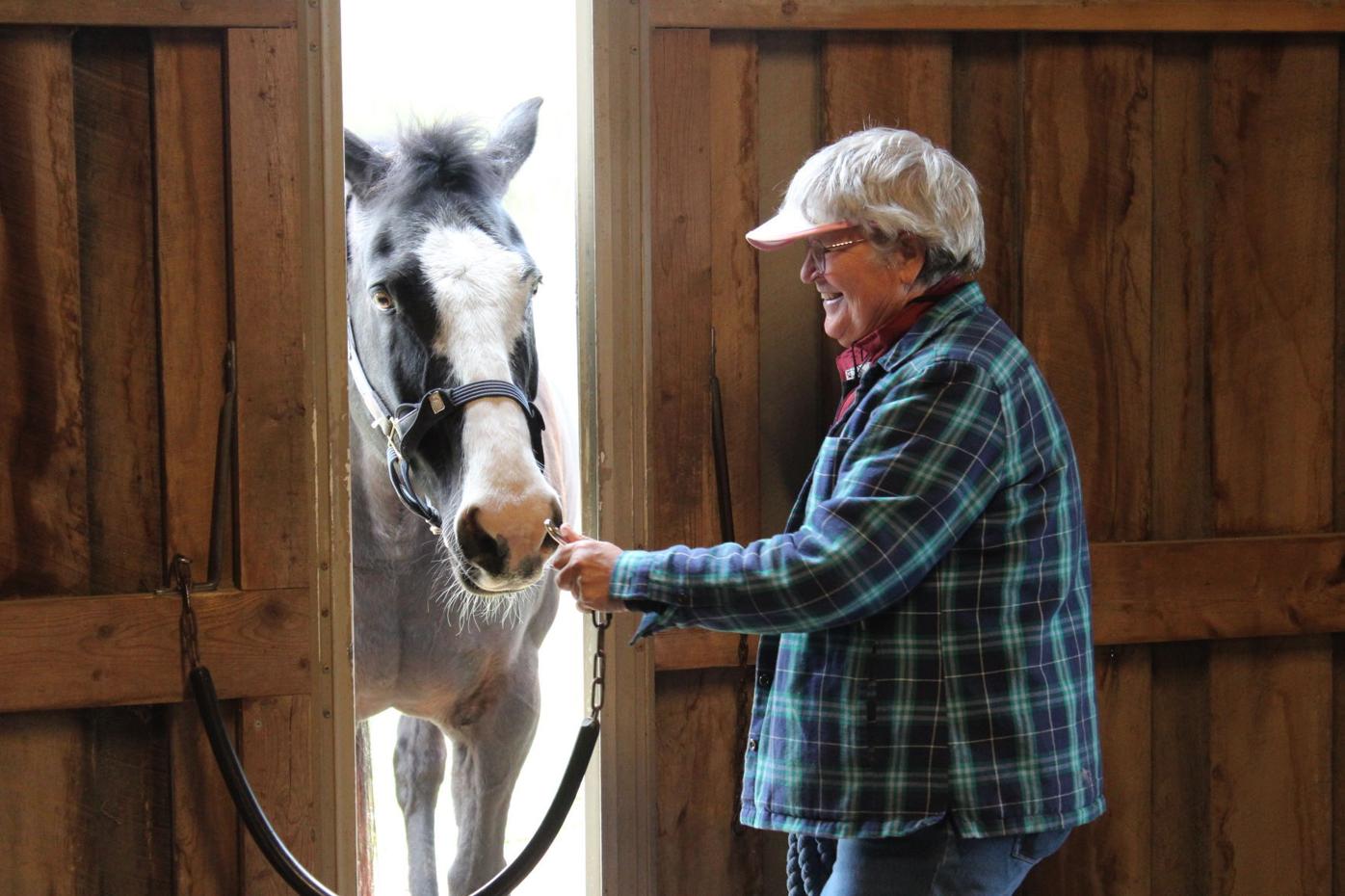 After eight years volunteering at Rose of Sharon Equestrian School, Janet Knox has been named Volunteer of the Year for Region 2 of the renowned Professional Association of Therapeutic Horsemanship (PATH) International. 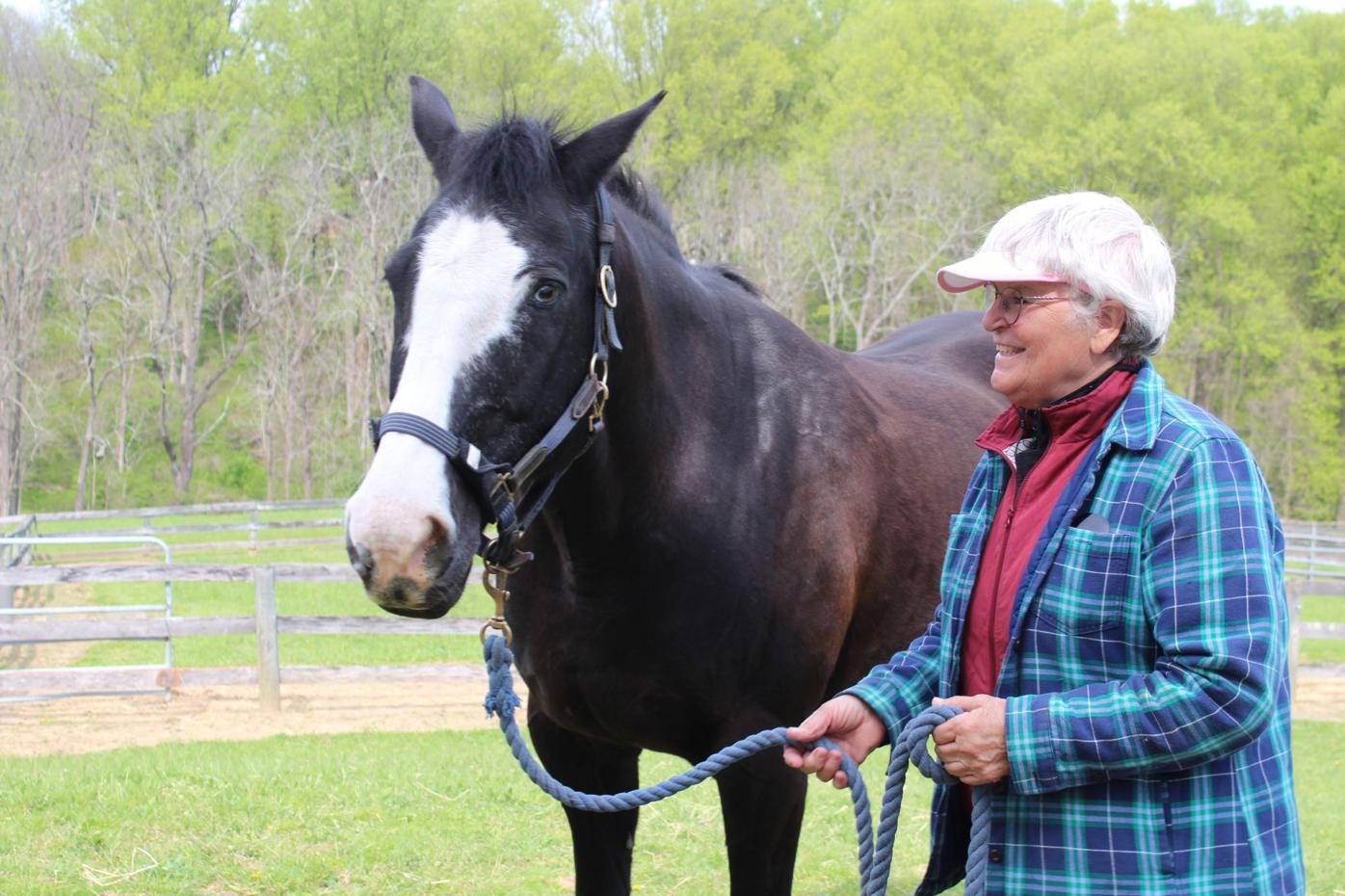 “I was really pleased that I was selected,” said Knox, pictured here with her Percheron-Paint gelding Blaze. “I consider it a great honor.”

After eight years volunteering at Rose of Sharon Equestrian School, Janet Knox has been named Volunteer of the Year for Region 2 of the renowned Professional Association of Therapeutic Horsemanship (PATH) International.

“I was really pleased that I was selected,” said Knox, pictured here with her Percheron-Paint gelding Blaze. “I consider it a great honor.”

GLEN ARM — As a volunteer at Rose of Sharon Equestrian School, Janet Knox has seen miracles.

Rose of Sharon is a facility off Harford Road in Glen Arm that gives people with disabilities the chance to ride, work with or just be around horses. The experiences can be therapeutic, leading to miracles — like when a horse brought its foot down onto Knox’s toes and a student with autism who had previously said very little asked, ‘Are you okay?’

“It was the first coherent sentence this fellow said,” Knox recalled. “‘Are you okay?’ Just as clear as anything — it was a breakthrough.”

It’s no stretch to say that for Rose of Sharon, Knox herself has been a miracle, and she was recently named Volunteer of the Year for Region 2 of the Professional Association of Therapeutic Horsemanship (PATH) International.

Founded in 1969, PATH International is a renowned nonprofit with over 60,000 volunteers which promotes the therapeutic benefits of horseback riding, and Region 2 includes Washington D.C. and the states of Maryland, Delaware, New Jersey, New York and Pennsylvania, as well as all of Europe and the Middle East.

So no small honor, and one which took Knox completely by surprise.

“I had no idea that my name was submitted,” she said, looking back with a laugh. “But I was really pleased that I was selected, and I consider it a great honor.”

She seemed a little bashful, but then leaned in with a grin to add: “On the other side, I do think I’m a good volunteer.”

“Janet — she’s just a pillar of the organization,” Twining said. “In every way you can think of.”

After nearly four decades in special education with Baltimore City Public Schools and experience competing in three-day events (horseback triathlons of dressage, cross-country and show jumping), Knox is basically — in her own words — ‘the total package.’

She started volunteering at Rose of Sharon about eight years ago after a tip from their mutual ferrier. She started out as a volunteer in the evenings, just once or twice a week, but her commitment steadily grew as she started working more and more with students.

Now, she comes out pretty much every day to work with Blaze, a 21-year-old Percheron-Paint gelding she sponsored for the program, keeping him fit and ready for students. She’s always ready to help out — Twining wrote in her Volunteer of the Year recommendation that Knox has no problem mucking a stall when needed.

Twining said that Knox’s background with horses and in special education is a tremendous asset.

“If Janet’s down at one end and she’s got kids in a stall with a horse, I know I don’t have to worry about anything,” she said. “Everything is going to be fine.”

Blushing, Knox insisted that the horses themselves have a significant impact on students. She remembered another student who came into the barn clearly upset and needing to talk.

“I said, ‘Why don’t you go down to the end? Stella is down there, and she likes to listen,” Knox recalled. “My volunteer helper went down there with the young lady, and at the end of the session she said, ‘I feel so much better. Stella really listened to me.’”

Twining, who opened Rose of Sharon with her husband in 2001, explained that horses offer a clean slate — they don’t judge a person based on their ability, speech or appearance. Rather, they’re surprisingly emotionally attuned and have unique ways of communicating. Volunteers like Janet, she added, help to provide the magic touch, giving students highly individual experiences.

“We challenge slightly each week, but we don’t push,” she said. “We try to meet everybody where they are.”

She gathered a group of volunteers to celebrate Knox’s Region 2 win, which qualifies her as a finalist for the PATH International worldwide Volunteer of the Year award, which will be announced later this summer.

Knox lives in Parkville, just a fifteen minute drive, and has no plans to retire from Rose of Sharon anytime soon.