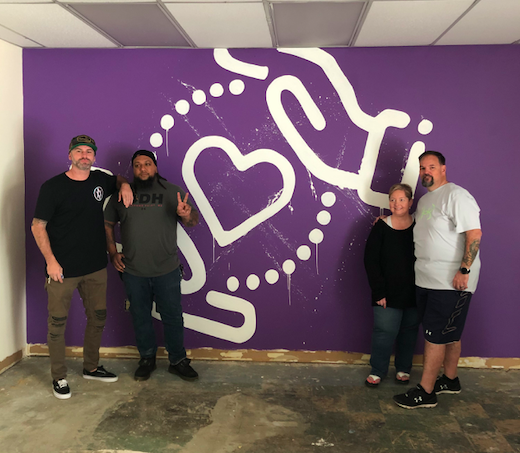 From left to right: Danny Loren, DJ Rampage, Stacy Nagel, director of Soup for the Soul; and David Nagel. Loren is a graffiti artist whose passion and creativity have taken him to national fame. Last week, he returned to southeast Baltimore County to paint inside Soup for the Soul’s new building. He painted the Soup for the Soul logo seen in the photo. 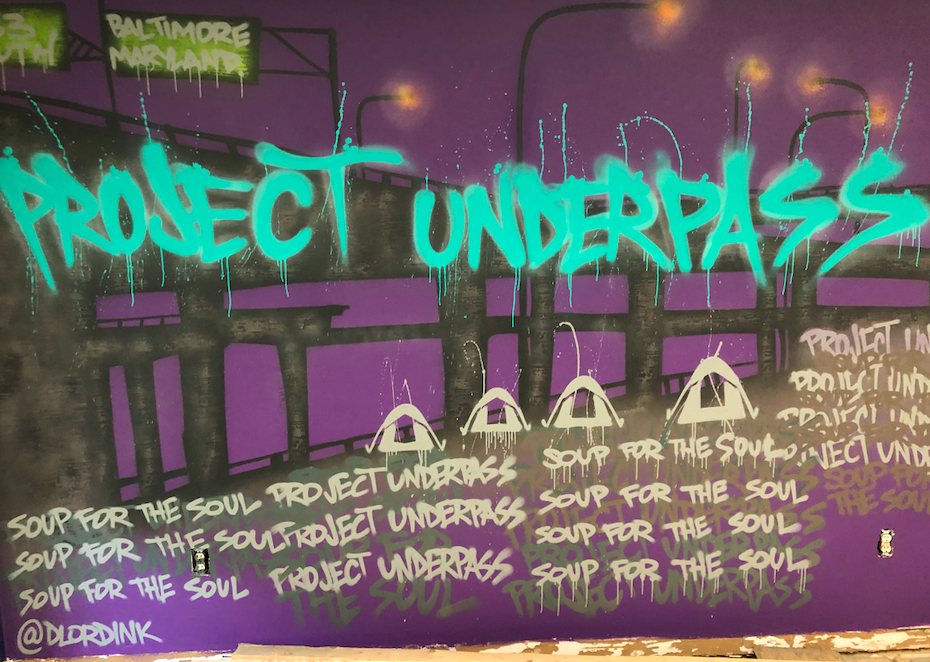 From left to right: Danny Loren, DJ Rampage, Stacy Nagel, director of Soup for the Soul; and David Nagel. Loren is a graffiti artist whose passion and creativity have taken him to national fame. Last week, he returned to southeast Baltimore County to paint inside Soup for the Soul’s new building. He painted the Soup for the Soul logo seen in the photo.

DUNDALK — When you enter Soup for the Soul’s new building, you’ll see murals custom-painted to reflect the nonprofit’s identity.

One local man who volunteers with Soup for the Soul, in addition to a Baltimore City outreach initiative called Project Underpass, is longtime friends with Danny Lorden. The volunteer goes by the name DJ Rampage. Lorden is an Essex native, whose passion for spray paint art has catapulted him to national fame.

Lorden currently lives in San Diego, California, but travels around the country to participate in celebrity-endorsed art projects and to share what drives him to be an artist. Lorden comes from a family of artists. His father painted vehicles. His mother decorated wedding cakes. His grandfather was a photographer.

“Growing up in the early 90s, I saw that graffiti was becoming more popular,” Lorden said. “I practiced it a few times. Then I got into airbrushing.

“Now they’re making painting really more mainstream and popular. I take a lot of inspiration from other artists in graffiti.”

Lorden’s latest project was down in Dundalk, inside Soup for the Soul’s new building located at 299 Willow Springs Rd. The first thing you’ll see when you walk in is a mural inspired by Project Underpass. It depicts an overpass on I-81 in Baltimore City, with a group of tents underneath. Lorden also handpainted a mural depicting Soup for the Soul’s logo, located further inside the building.

Rampage said that he and Lorden met through mutual music interests – heavy metal, in particular. Before COVID-19, the two often went to concerts with other friends. Lorden said Rampage has been to his home many times in San Diego, where the two men enjoy skydiving. These two also share another common interest – youth outreach.

“This is a rough neighborhood,” Rampage said. “This community sure needs a nice community outreach center.

“We need to figure something out. The youth out here, man, they don’t have anywhere to go.”

Lorden said he likes what Soup for the Soul is about, he said. He told Rampage the next time he returned to Baltimore, he would make time for the project. Being from southeast Baltimore County, Lorden said that he, like Rampage, saw the consequences young people suffer from dangers in their environment throughout his childhood.

“Being from Baltimore can be a tough spot for some people,” Lorden said. “Seeing people go down the tubes of the darkness in the city. I grew up in the county, but I ventured into the city with painting, and you see things. The city is a whole different animal.

“In San Diego, I tell people I’m from Baltimore and they’re scared, because of the reputation.”

Lorden said most of his family and friends are still living in the Baltimore area. He uses every opportunity when he returns to spread positivity in his neighborhood. He said Baltimore will always be his home, but San Diego, and wherever else the world and his art take him, is his plan. Lorden has worked on several viral art projects, including Graffiti Mansion in Las Vegas and the Fashion House in Nashville. He also has an idea to use his art to reach young people.

“One of the more positive things to come out of this is hopefully we’d like to, in the future, organize some kind of art class for children and teach them basics,” Lorden said. “I’m a full-time muralist. I follow what I like. To each their own.

“But it’s beyond a high school art class. I have a friend who does paint nights and does really well.”

Lorden said painting is also like therapy for him. He uses his imagination to turn a vision into a creation. He wants to exhibit that aspect to young people, as well. He wants to show people that they can express themselves through art.

“We’re living in weird times right now, and anything to feel good with more self-empowerment is good,” Lorden said. “It’s your creation. You can make it as pretty or as sloppy, or as clean or as drippy as you want it.

“You can paint portraits of people’s animals, but you have to start somewhere. So, we want to plant the seed now. That way, it can continue to be watered.”

Lorden said he wants to continue to return to Baltimore when every opportunity presents itself not just for positivity and outreach, but also because there is so much real estate around Baltimore City and east Baltimore County. He’s been to every major city in America, he said, and they all have murals on buildings catered to those cities’ respective cultures and identities.

“Baltimore needs more murals,” Loren said. “Even in the county. These walls have so much opportunity. You could spread so much [positivity].

“Whatever image people would want to portray, I would love to get a budget from the county to beautify certain areas. It’s not an advertisement for myself. We could paint a message of peace, love, Baltimore, Orioles, Ravens or whatever we want to do.”

Lorden talked about the famous wings mural in Nashville, saying the mural is so popular that people will wait in line to have their picture taken in front of it. The mural shows two gargantuan wings over a black background. Baltimore City and County need walls that offer that same “Instagrammable” experience, he added.

“I want to really push the limits and have something fun downtown [Baltimore City] or even east Baltimore County, where I’m from, just to bring a more positive note to the neighborhood,” Lorden said. “I need that outlet. I need someone to let me be creative and let us do our thing.

“Then you will start seeing more people come around. More color. The palette around here is very bland, and it needs more color. It needs some fun stuff.”

Soup for the Soul opening soon

Nagel and other volunteers continued with planned food giveaways. Their most recent food giveaway was last month, at the Dundalk Optimist Club. The club provided Soup for the Soul with a space to continue its outreach. The two organizations plan to collaborate on projects in the future.

Soup for the Soul is still taking donations in the form of food, clothing and other necessities, and monetary donations. Anyone interested in donating these items to Soup for the Soul are asked to contact the organization at 443-742-9160, or through their Facebook page at www.facebook.com/s4s18.