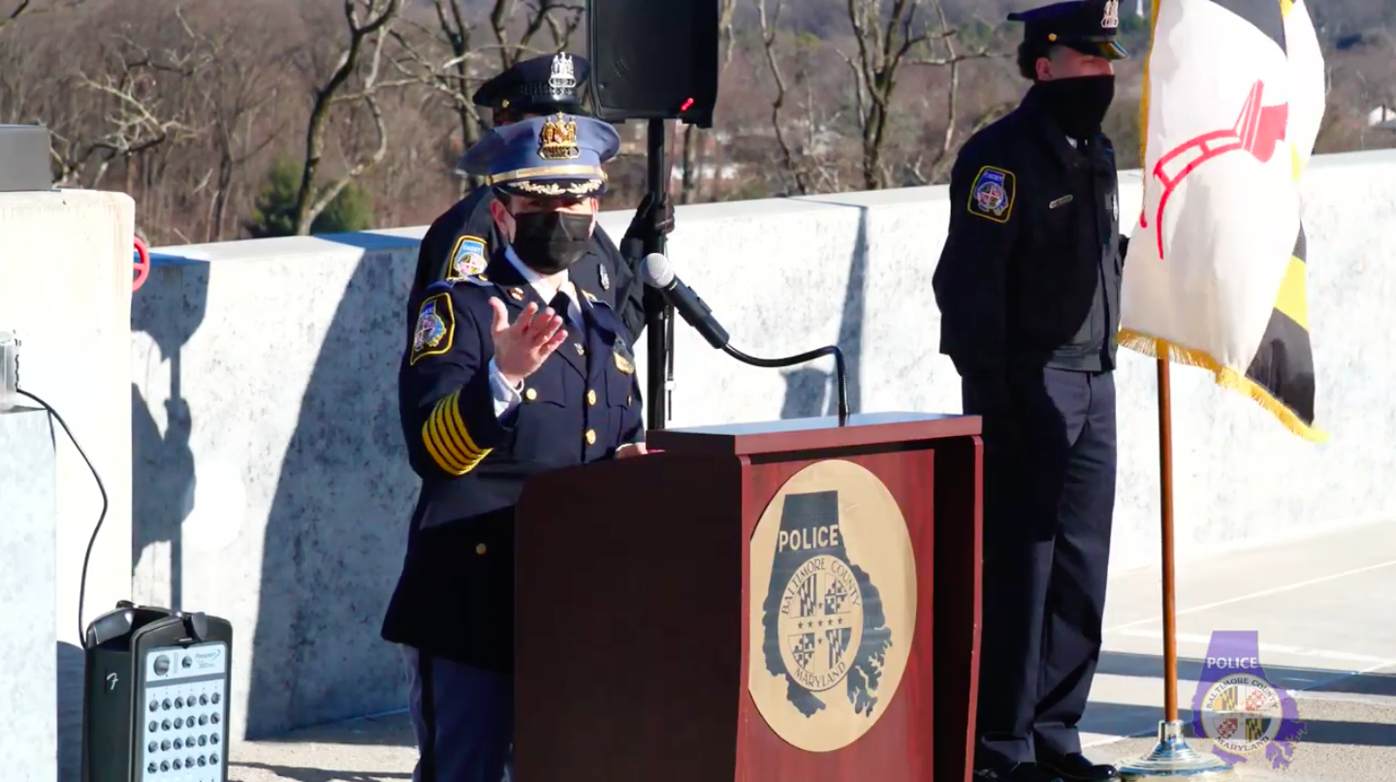 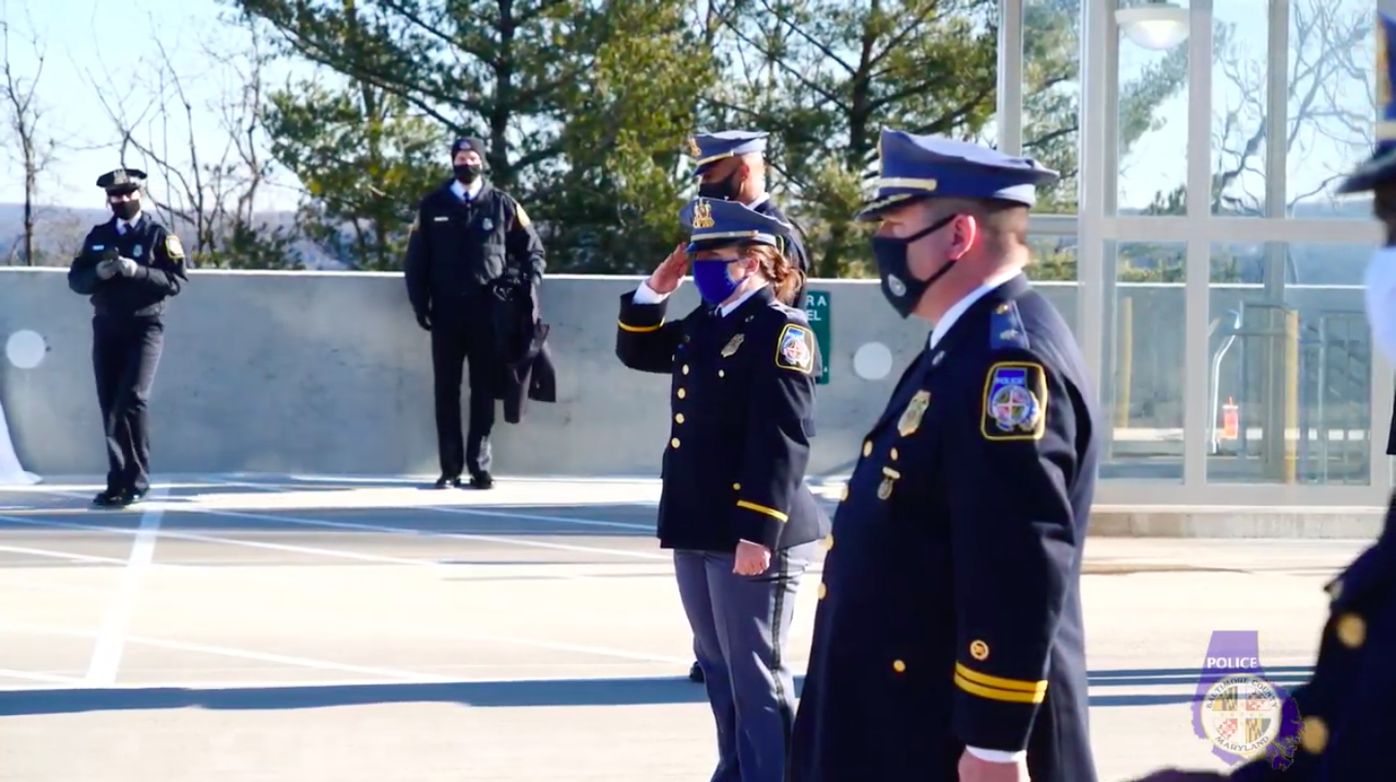 Precinct 9 Captain Cathleen Batton saluted as her name and new title were called during the promotion ceremony Thursday.

Precinct 9 Captain Cathleen Batton saluted as her name and new title were called during the promotion ceremony Thursday.

Baltimore County Police Chief Melissa Hyatt opened the ceremony with congratulations for those who would receive promotions.

“As a police chief, there is really nothing better than being able to strengthen the future of our organization with dedicated and qualified leaders,” Hyatt said. “I am really proud about advancing this group into higher leadership and command roles.”

The morning was bright, but chilly in a blustery wind. Hyatt acknowledged that outdoor ceremonies are better suited for more comfortable weather, and expressed hope that the department would soon be able to return to its usual style of assembly to celebrate the promotions.

However, the disruption of the COVID-19 pandemic and other challenges facing police officers in the line of duty made the latest promotions more significant, Hyatt said.

The ceremony proceeded in three parts to limit the number of officers gathered at one time, and all assembled adhered to social distancing guidelines. A live stream of the ceremony allowed friends and family of the officers, as well as other community members, to tune in from home.

Conger was previously the commanding officer in Precinct 9 before he was tapped to handle Special Operations amid the COVID-19 pandemic, according to Ofc. Jen Peach, a department spokesperson. Batton took over as the acting commander in Precinct 9, and will continue to serve as commander with her most recent promotion.

Kelly was also previously the Precinct 9 commanding officer, but he moved to the department’s Criminal Investigations Bureau and will now lead the Central Patrol Division.

Hyatt also announced a series of command movements taking effect Thursday evening, including the assignment of Captain Eliot Latchaw to command Essex’s Precinct 11 after serving as the commander of Wilkens’ Precinct 1. Latchaw will trade places with Captain Craig Mitchell, the former Precinct 11 commander who will now head up Precinct 1.

The reassignments were made so that both commanding officers would be closer to their homes, Peach said, significantly reducing travel time to their precincts.

At the ceremony Thursday, each round of promotions proceeded by rank, with officers raising their right hands to reaffirm their oaths of service to the department.

“I do swear or affirm that I will support the Constitution of the United States, and that I will be faithful and bear true allegiance to the State of Maryland,” the officers repeated. “I will to the best of my skill and judgement, diligently and faithfully, without partiality or prejudice, execute the rites of passage according to the constitution and laws of this state, and the values of the Baltimore County Police Department.”

The officers then stepped forward and saluted as their names and new titles were called.

Baltimore County Executive John Olszewski, Jr. shared brief remarks by video, thanking those assembled for their service in the department.

“These days, your leadership is needed now more than ever,” he said. “On behalf of the people of Baltimore County, I want to thank you and your families for the sacrifices you make day in and day out.”

In his remarks, Olszewski said that the ceremony was a moment to recognize the work and accomplishments of those officers receiving promotions.

“Today, we honor your commitment to our communities,” he said. “Today, we applaud the work that you do with fellow officers to serve and protect the people of Baltimore County. We are a better and safer county thanks to everything you do.”

Hyatt said the officers represented the best possible leadership team that the department could have in place to overcome what she called unprecedented and challenging times.

“While my expectations of you, as many of you know, are very high, I have full confidence in each of you,” she said. “I’m excited to watch you shine in your new roles.”

With story tips or comments about our coverage, feel free to call (443) 239-0737 or email jtook@chespub.com at any time.