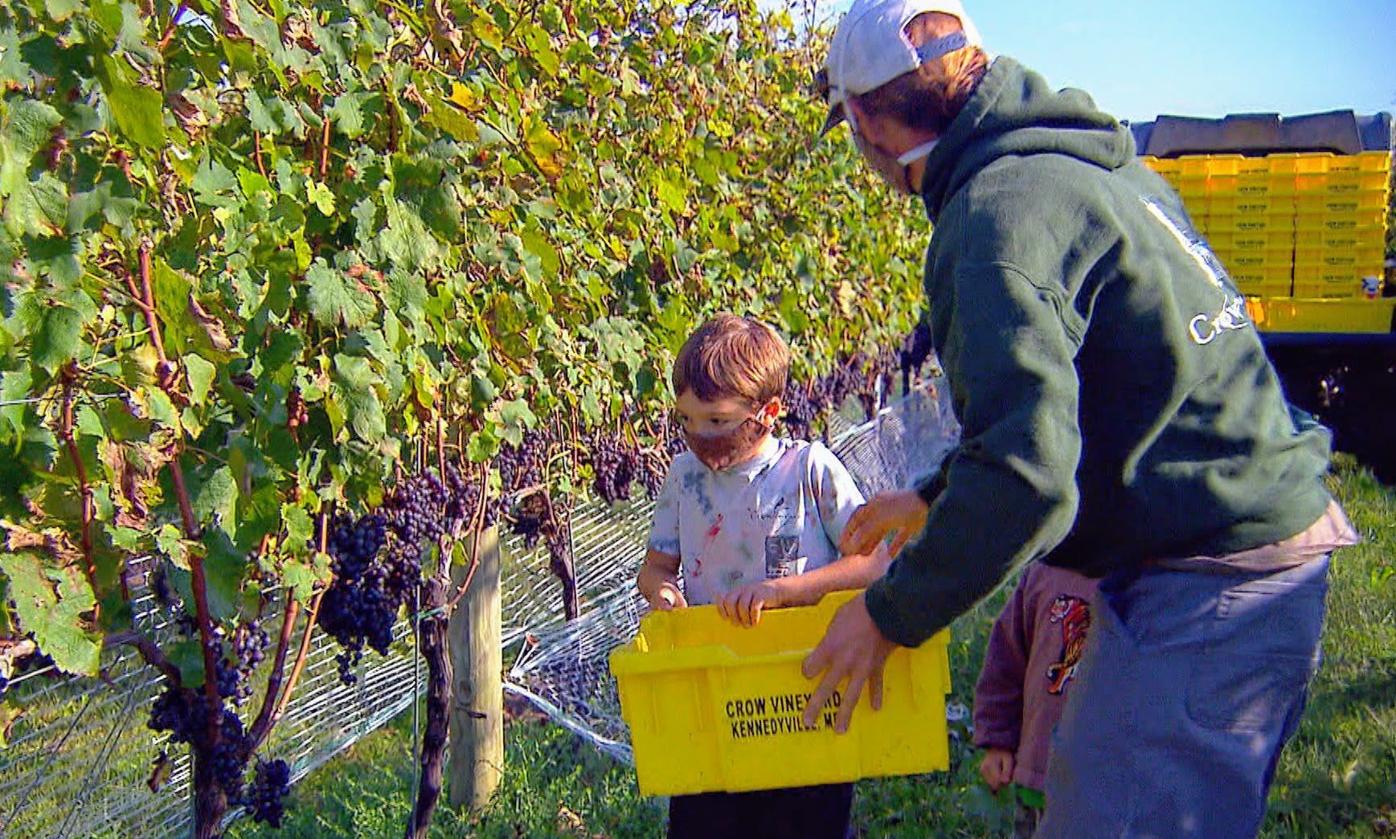 At Crow Vineyard and Winery, a family operation including 12.5 acres of grapes, a tasting room and a bed and breakfast inn, the show hosts learn more about why the number of wineries in Maryland has tripled in the last decade. 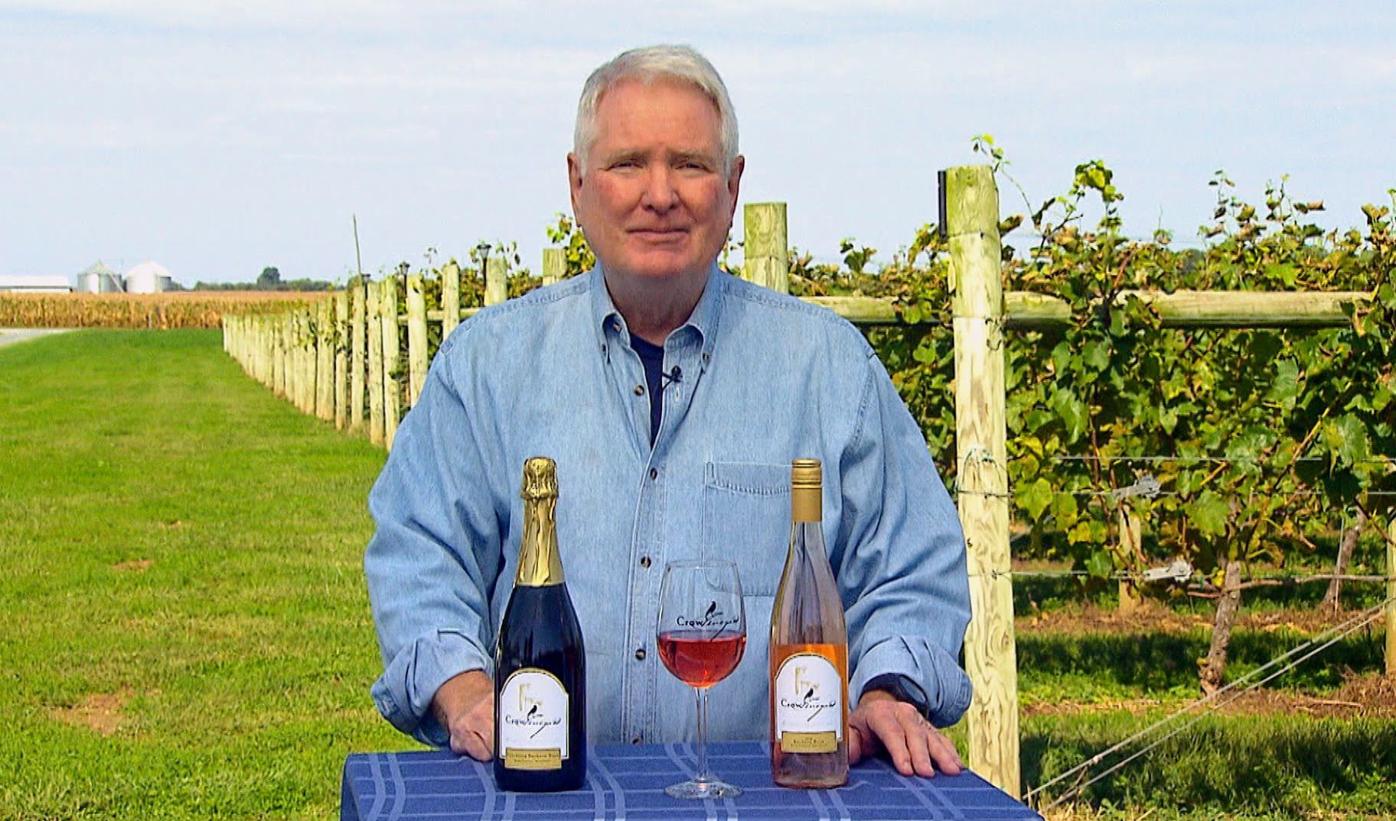 At Crow Vineyard and Winery, a family operation including 12.5 acres of grapes, a tasting room and a bed and breakfast inn, the show hosts learn more about why the number of wineries in Maryland has tripled in the last decade.

OWINGS MILLS — Maryland Farm & Harvest, a popular Maryland Public Television series showing off the state’s agriculture and outdoors, will air its landmark 100th episode tonight at 7 p.m. as the show nears the end of its eighth season.

Series producer Joe Ligo said that the milestone snuck up on them.

“We tend to think in terms of seasons, rather than episode numbers, so it was kind of a surprise,” he said with a chuckle. “It was like, ‘Oh yeah, I guess this is our 100th episode.’”

For Ligo, who grew up on a farm in Western Pennsylvania and brings his firsthand knowledge of farming to his role on the show, bringing attention to the passion, dedication and hard work of Maryland’s farmers is part of what makes the show special.

“One of the things we enjoy most about our show is the chance to share these stories that aren’t being told anywhere else,” he said. “We actually go to the source and talk to the people who are doing this work.”

Frequently, the series starts with one particular farm or business as a launch point to explore a larger story.

At Crow Vineyard and Winery, a family operation including 12.5 acres of grapes, a tasting room and a bed and breakfast inn, the show hosts learn more about why the number of wineries in Maryland has tripled in the last decade, from 34 in in 2010 to over 100 today.

“Part of it is legislation, part of it is changing tastes,” Ligo said. “It’s definitely a good sign for Maryland farmers, that this is something that attracts new business and new customers.”

Amid the upheaval of COVID-19, Ligo said it’s especially meaningful to help bring attention to the challenges and triumphs of the state’s agriculture industry. The show has already done a number of episodes spotlighting how farmers have adapted to the demands of the pandemic, sometimes adopting new ways of doing business or completely shifting production to new revenue streams.

Some have rediscovered success — Frederick’s Deer Run Farm re-oriented its chicken breeding program to cater to the increased demand for domestic egg-layers amid turmoil in the national food supply chain. Others have sought relief funding after being unable to move crops or facing other disruptions.

“For some, it was too much of a good thing, and for other farms it was a challenge,” he said. “The lesson we learned is that farmers are pretty resilient, and pretty good at adapting.”

Producing a TV show amid the pandemic also brought on complications, forcing Ligo and his team to adapt their own ways of doing business. Maryland Public Television has always prioritized the safety of staff, he said, adding that Maryland Farm & Harvest is particularly fortunate — much of the show can take place outside.

Still, it’s been a challenge for everyone involved.

Ligo, who stepped into his role as series producer in 2019, credited the work of those who preceded him for getting the show to where it is today. He also thanked his staff for their creativity and flexibility in making this latest season.

“We'll have to hold off until we're able to meet back in-person to celebrate, but I will say that I am very thankful for all the hard work my team did this year,” he said. “It would not have been possible without their effort.”

The episode airs tonight — Tuesday — at 7 p.m. on MPT-HD and will also livestream at mpt.org/anywhere/live-stream-mpt/. Encore broadcasts will be available on MPT-HD Thursday at 11 p.m. and Sunday at 6 a.m, and the episode will also air on MPT2/Create® on Friday at 7:30 p.m. Past episodes can be viewed at video.mpt.tv/show/maryland-farm-harvest/ while segments are available on YouTube at youtube.com/c/MarylandFarmHarvest/featured.

While Ligo said he will be proud to see the 100th episode air tonight, the end of the season feels more significant — and gives him and his staff a bit of a breather. That said, he’s already thinking about next season.

“When that last episode airs, it's always such a good feeling — like, ‘We made it,’” he said. “Here's to season nine hopefully being a little bit easier.”