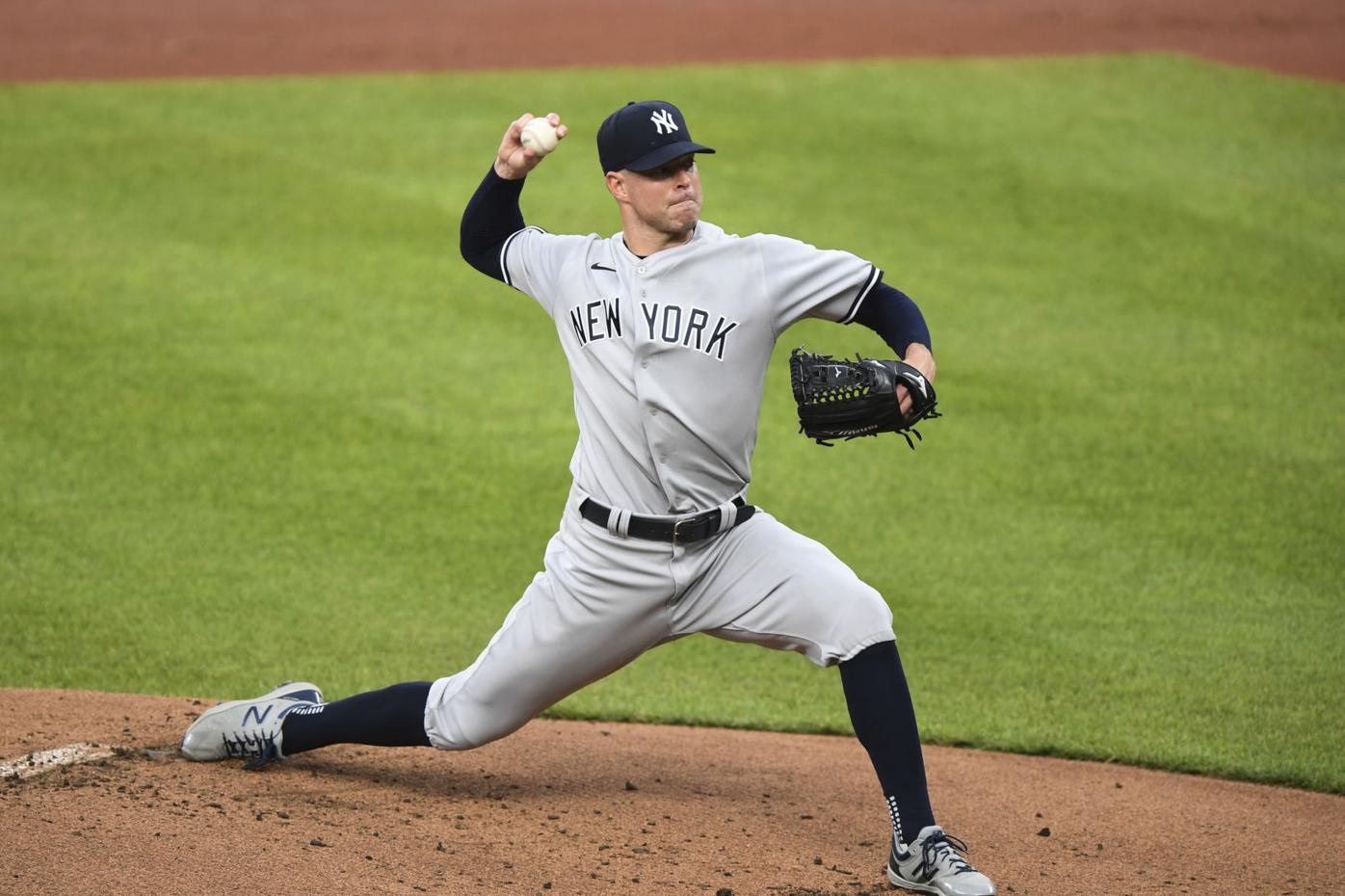 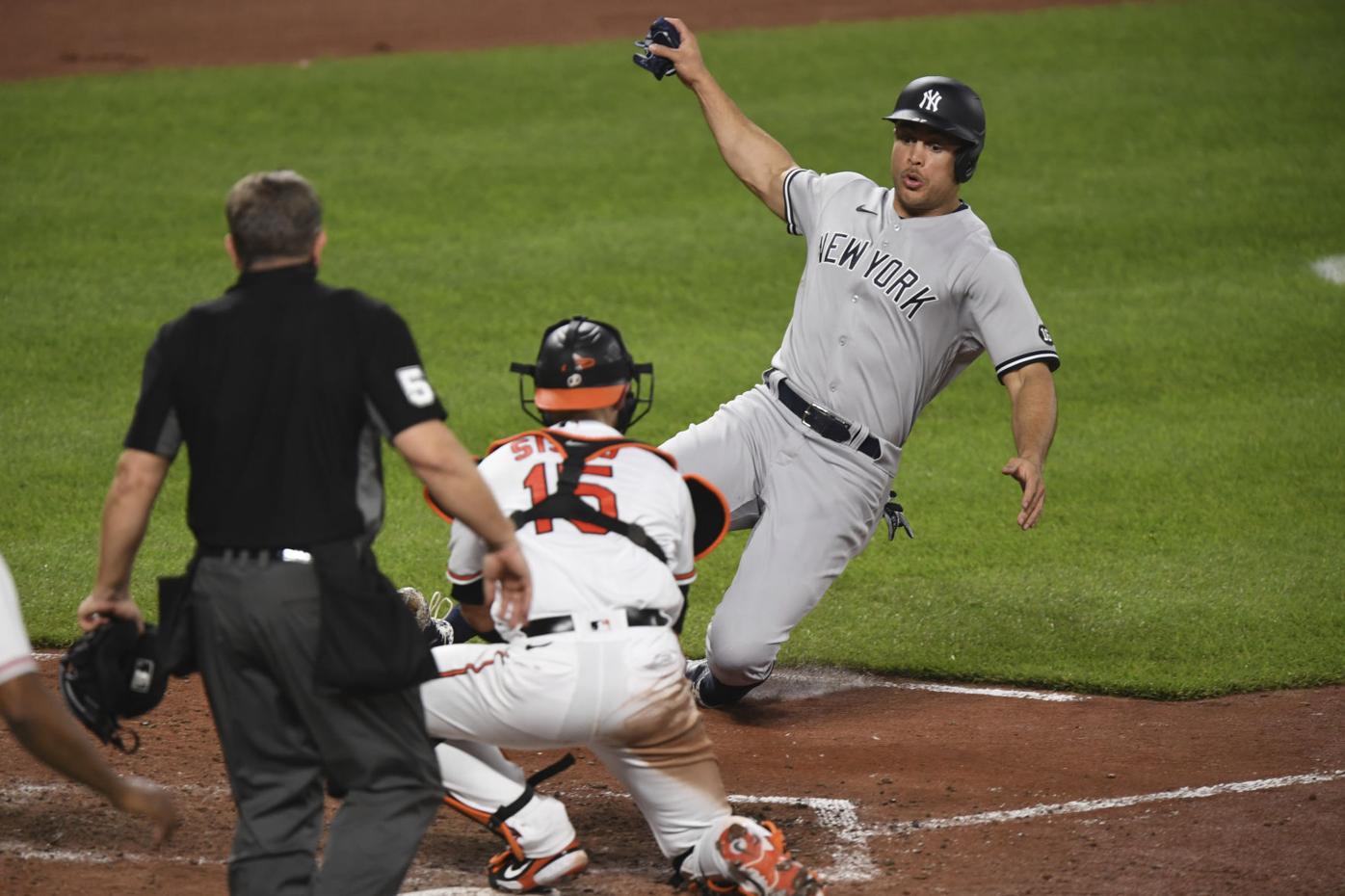 New York Yankees’ Giancarlo Stanton slides but is tagged out by Baltimore Orioles catcher Chance Sisco during the third inning of a baseball game Tuesday, April 27, 2021, in Baltimore.

New York Yankees’ Giancarlo Stanton slides but is tagged out by Baltimore Orioles catcher Chance Sisco during the third inning of a baseball game Tuesday, April 27, 2021, in Baltimore.

Aaron Judge and Giancarlo Stanton also homered — the Yankees are 9-0 when they go deep in the same game, including the playoffs. New York stopped a four-game skid at Camden Yards and at 10-13 moved into a tie with the Orioles for last in the AL East.

“Corey set the tone,” Yankees manager Aaron Boone said. “Obviously, he threw the ball really well and was in command most of the night. I thought our offense did a lot of really good things. We still didn’t breakthrough with a lot of runs, but we’ll certainly take five.”

Kluber (1-2), who signed an $11 million, one-year contract as a free agent, allowed one run and six hits with five strikeouts over 6 2/3 innings. Kluber has come back from two injury-marred seasons and became the first Yankees starter other than Gerrit Cole to pitch into the seventh inning this season. It was Kluber’s first win and longest outing since he threw seven innings against Atlanta on April 20, 2019.

“Obviously getting the win was the most important thing, but it was good to finally go out there and string together a good outing,” Kluber said. “Any win you can get is a special one.”

New York had 12 hits, and for the first time this year the Nos. 1-3 hitters in the Yankees batting order had multiple hits.

DJ LeMahieu doubled leading off and scored on a flyout by Gio Urshela; the Yankees had been the only major league team without a sacrifice fly this season.

Judge hit his fifth homer in the third, and the Yankees made it 4-0 in the fourth on a home run by Higashioka and an RBI single by Urshela that ended the night for rookie Bruce Zimmermann (1-3), who gave up nine hits in 3 2/3 innings.

“I just though he left some balls out over the plate,” Orioles manager Brandon Hyde said. “It wasn’t the best night for him..”

“I don’t concern myself too much with who is going to play when,” Higashioka said. “If I’m playing my best baseball, more than likely, I’ll end up finding more playing time at some point. My main focus is going out there and playing my best every time.”

Maikel Franco had an RBI infield single in the fourth off Kluber, who kept the Orioles off-balance with his changeup, sinker and cutter,

Stanton hit a 434-foot homer in the seventh that boosted the lead to 5-1 off Dillon Tate. Stanton leads the Yankees with six homers.

Esteban Loaisiga allowed one hit in 1 1/3 scoreless innings, throwing 15 of 28 pitches at 98 mph or higher, including a career-high 100.2 mph. Lucas Luetge followed with a perfect ninth.

Orioles outfielder DJ Stewart’s backswing smacked Higashioka in the helmet and sent his face mask flying to the grass in the fourth.

Stanton was easily throw out at home by left fielder Auston Hays on a single by Urshela in the fourth. It was the 12th time the Yankees had a runner thrown out on the bases — the most in the majors.

Yankees: RHP Michael King was recalled from the alternate site. He has thrown nine scoreless innings in two relief outings for New York this season.

Orioles: INF Pat Valaika was recalled from the alternate training site and went 0 for 4. ... Following the game, Jay Flaa was optioned to the to Double-A Bowie.

Orioles: SS Freddy Galvis is day to day with left adductor soreness. Galvis left Monday after running to second on a run-scoring double. ... Judge, bothered by lower body soreness, came out in the ninth inning and likely will get a day off in the next few days. “I’m just going to stay out in front of anything that comes up,” Boone said.

Yankees: RHP Domingo Germán (1-2, 6.23 ERA) earned his first win since September 2019 in his last outing, limiting the Indians to three runs — two earned — over six innings on April 22. He is 4-0 with a 2.97 ERA in four starts and two relief appearances against the Orioles.

Orioles: RHP Dean Kremer (0-1, 6.75 ERA) will be recalled from the alternate site to make the start. He took the loss April 6 against the Yankees after allowing three runs and five hits over three innings.